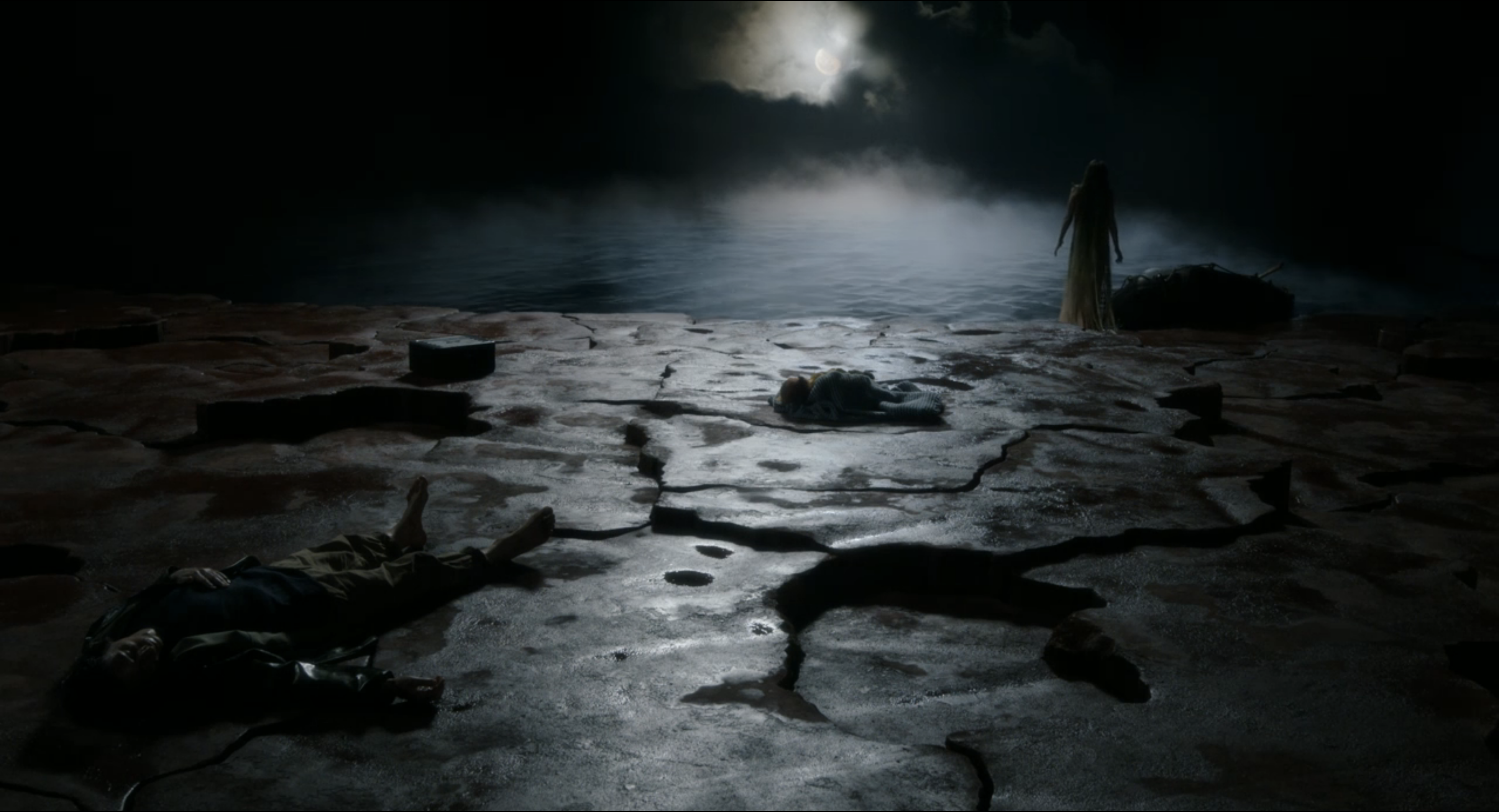 Yes, that opening. But not just “So May We Start,” which is as rousing, cheeky, and entrancing a first song as a film such as this could ask for. The film properly opens — after the far sillier spoken introduction — with a brief snatch of the French folk song “Au clair de la lune,” which leads into a shot of the outside of a Los Angeles studio at night. This image is rapidly overtaken by feedback manifested visually by red soundwaves, a motif carried into the studio itself, where musicians prepare to record, each burst of noise causing the camera to flicker, as shots are briefly overlaid on each other. This finally leads to Leos Carax calling over his daughter Nastya in French before introducing the first of many proper Sparks recordings.

Leaving aside the obvious narrative implications of a song called “By the light of the moon,” the credits specify that this is the “first recording of a human voice,” and that collision of traditions within a given medium course through Annette‘s veins. French and American, primitive paper recordings and high-tech digital audio, silent and sound cinema: these are the terms on which Carax is working, in which material reality coexists side-by-side with the unreal. In that sense, Annette’s central puppet deftly straddles the line between the two: a physical object that always feels uncanny.

The same could very much be said of Sparks’s music: I’ve listened to very little of their work otherwise, but the music on its own, while frequently catchy or at the very least an earworm, works here in large part because of its slipperiness, its integration with the dialogue. Henry’s first, abrasive show is a perfect introduction: slipping into no less than three, perhaps four songs over the course of about ten minutes, all moving with such abandon that it’s difficult to tell whether the songs are part of the act or part of the musical component. Of course, that slipperiness is inherent to the confrontations, arguments, and declarations of affections that speckle this film in musical form. But even more disorientingly, the actors’ intonations and recitations of dialogue often land in a phantom zone between speech and song, where it is throughly muddled whether a given line is meant to be part of a song or not.

Such ambiguity often doesn’t extend to the level of narrative, however, for better or worse. Despite its often extravagant scale, what with its globe-hopping scale, constant media intrusion, and apparently years-spanning timeline, Annette is ultimately a small, intimate film, detailing the fallout of the relationships of four broken people, though this is doled out in fits and spurts. Even with all the ruptures and dreamlike moments, there’s a fidelity to emotion that remains paramount, a belief in the tragedy of bonds ruptured by the strength of personal histories and forceful personalities.

Of course, that’s where Adam Driver comes in. The effect of his final scenes, hollowed out and eaten alive by his own actions, is at once startling and entirely in keeping with the arc of his performance. Throughout, he remains prowling and magnetic, and Carax’s camera responds in kind, circling him with the same intent watchfulness that Driver never lets up on. His voice is equally as implacable: sometimes rumbling and portentous, other times high and quavering, in a way wholly unpredictable.

Implicit in this willful disorientation of viewer’s expectations, at least with something that chooses not to establish a baseline aesthetic or reality, is a certain unevenness, only exacerbated by the fragmentation caused by some musical sequences as the film proceeds towards its last trajectory. Some of the treatment of the media, for example, feels straight out of the more parodic moments of Clouds of Sils Maria, and at certain points it’s difficult to ascertain exactly how far the musical concept can be pushed. But more often, Carax lands on images and moments that stun: operatic deaths overlaid on a rushing motorcycle ride, unusually restive shots of a house slowly decaying, and above all the central storm, which combines the thoroughly artificial and archaic rear-projection with water spilling out across the set. Such dichotomies are the lifeblood of Annette: the sacred and the profane, the violent and the tender; Carax incorporates all of these into sequences that stubbornly refuse to remain one or the other, and the finale, which openly confronts the devices that had powered the film prior by stripping them away to just two voices singing, feels pitch perfect.