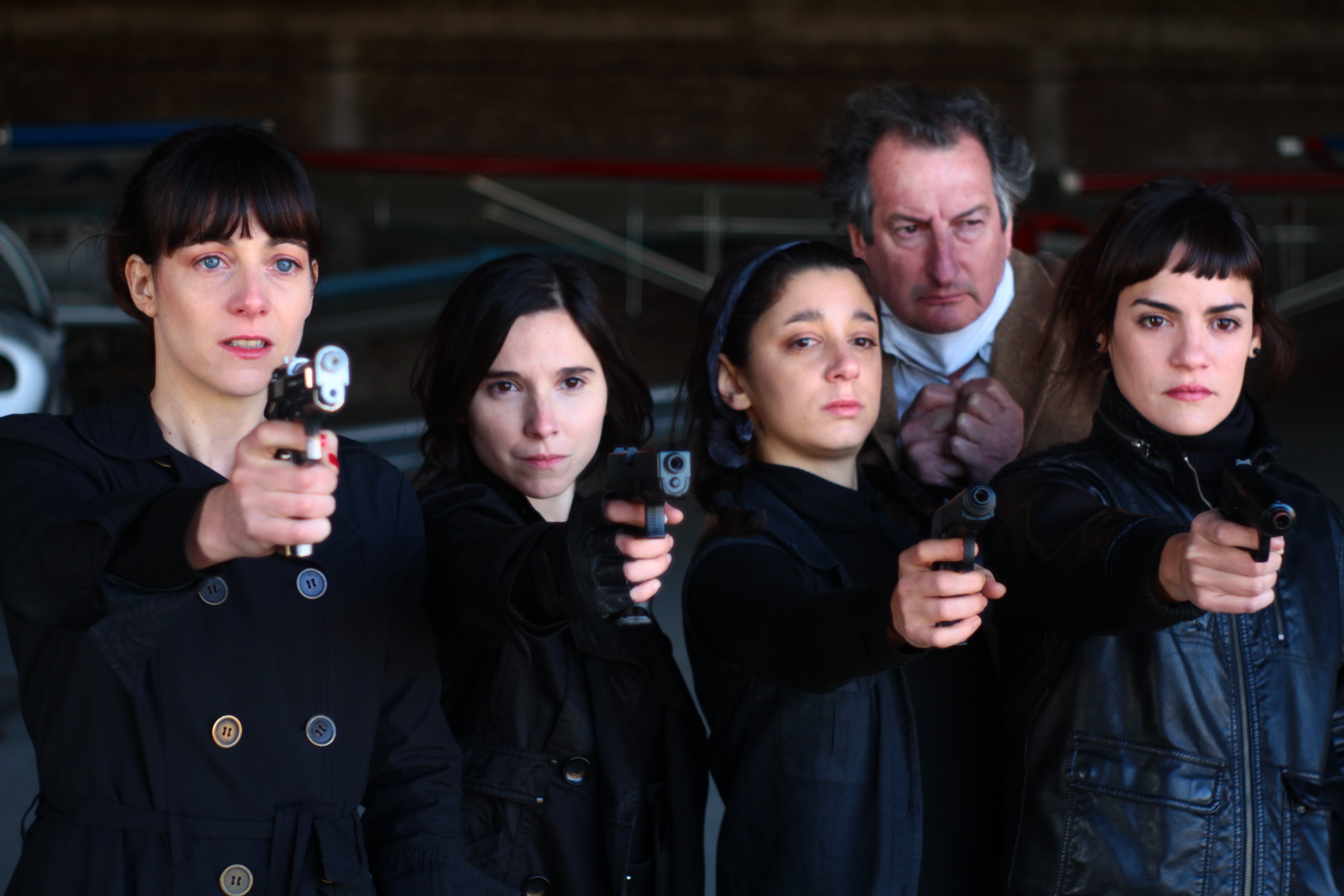 “But in that case, the entire magical, mysterious world in which I move would be shattered in a moment. And that’s not possible.”
– Colin, Out 1

“And who is this kind of Sultan who appears to have devoted his life to them?”
– Gatto, La Flor

At first glance, La Flor, Mariano Llinás’ magnum opus created in collaboration with the actresses Pilar Gamboa, Elisa Carricajo, Laura Paredes, and Valeria Correa, lacks the unity —structurally, tonally — that typifies so many of the greatest films of all time. An unashamed anthology film in every way aside from its conception by a single director, it spans no less than six genres/modes of filmmaking across its six episodes; counting the seven fifteen-minute intermissions and a luxurious forty-minute end-credit sequence, it runs 868 minutes (over 14 and a half hours), and takes as its very aim the exploration and co-opting of these disparate forms. Each part has its own flavor — a mummy B-movie, a musical “with a touch of mystery,” a spy movie (which itself spans multiple genres across five hours), an unclassifiable hybrid that piles something like four metafictions upon one another, a reimagining of Jean Renoir’s A Day in the Country, and a obscured visualization of an apocryphal text about 19th-century women held captive by Native Americans, respectively – starring the four actresses in all but the fifth episode in wildly varying roles. As might be expected, the process of making this film took ten years, shot episode-by-episode and piecemeal amid other films and across multiple continents. As part of the concept, the first four episodes tell stories that have no endings, the fifth tells a complete story fashioned from a famously unfinished film, and the sixth has an ending but no beginning.

Understandably, a project like this has never been made before, and in many ways it stands alone amongst other films; even something as sprawling as Jacques Rivette’s 13-hour Out 1, one of the films most commonly invoked in connection with this work — which in many (but not all) ways feels like its true spiritual successor — was shot in just six weeks. Indeed, it is difficult to think of a less outwardly focused all-timer: Out 1, for all its extended theatrical rehearsals and narrative digressions, emanates an overwhelming dread and fear in post-’68 Paris; the famously bifurcated shoot of Mulholland Dr. only enhanced the strange seductive pull of that dream factory known as Hollywood. So what makes La Flor the overwhelming, all-encompassing, electrifying masterpiece that it is?

Of course, one must start with the experience — I saw it in the largely de rigeur formulation of three parts, over the weekend that comprised the Locarno in Los Angeles 2019 festival — as with most films past a certain runtime. In a sense, La Flor both initially precludes but eventually invites a sense of complete and total discovery: the genres are laid out in Llinás’s introduction at the start of the film, giving the viewer a general road-map of the destination, complete with the diagram that gives the film its name. However, as with many of the best, most fascinating films, the journey is considerably stranger than initial appearances would suggest. Part of this is due to the slightly outmoded or schlocky nature of the first three genres in the film, especially in the context of world arthouse cinema, which consequently leads to a certain adjustment in expectations regarding rhythm — this is a far cry from slow cinema in every way except temporal duration — and how narratively “conventional” Llinás’s film might end up actually being. As might be expected, however, Llinás’s sensibility, while deeply committed to the intentions of genre in a way that proves vital for the film’s mastery, is too protean to play it all entirely like the films of each genre’s heyday, something which only becomes clearer in the later episodes: the Lewtonian mummy movie is inflected with a Cat People-esque subplot, the mystery mentioned in connection with the musical turns out to be a scientific cabal obsessed with using scorpion venom as a possible elixir for eternal youth, and so on. This approach, of course, is in keeping with Llinás’s previous film from 2008, the great four-hour Historias extraordinarias, which used its starting narratives as a jumping-off point to delve into a whole wealth of perspectives and stories.

What sets La Flor apart, however, is its recognition of the infinite possibilities that come with what might appear to be the rigid framework of genre. For all the invention of Historias extraordinarias — whose general sensibility is reprised multiple times throughout this film, most notably in the second half of episode 4 — it was bound more-or-less to the “real world,” and its concerns were strictly with the recognizable. No such compulsion is present here, and unexpected divergences arise, not just in the macro premise but in the micro: the sudden emergence of a character to the forefront of a narrative, a transformation of a certain group of characters that takes place with little prior warning. More importantly, this conception of a film world as something that is designed to be disrupted accomplishes the rare feat of pairing two distinctly contrasting things — continually upending the viewer’s conception of the world even as they recognize it is a world in which such things can (and logically should happen) — which are both fully thrilling in their own right, but produce an even greater frisson when placed in concert. 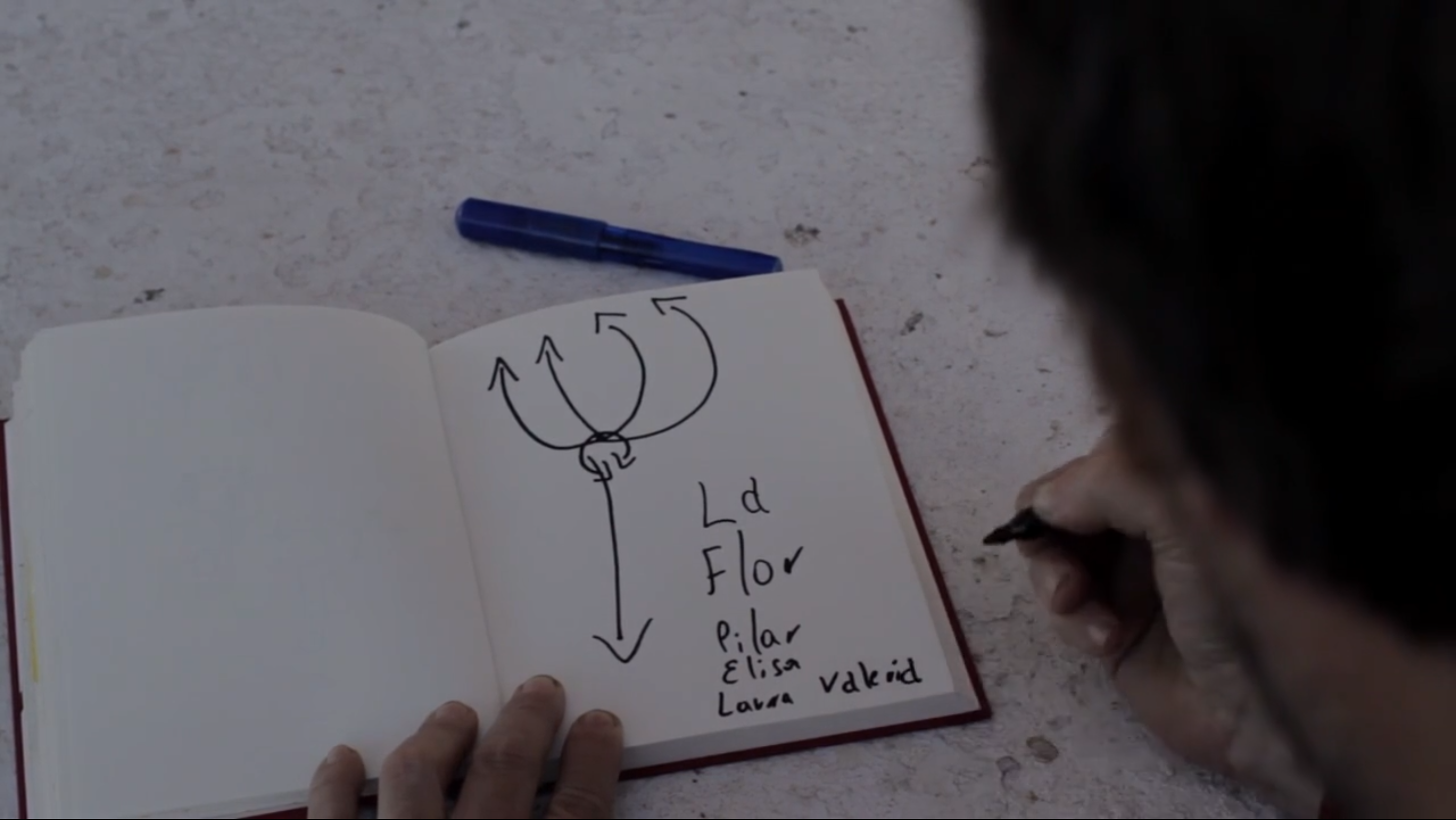 It might be useful to invoke Out 1 once more here. While Rivette’s film, certainly has more of an explicitly political bent built into the characters’ (mostly) unspoken reckoning with the current sociopolitical state, it shares that same fundamental mode of exploration. Jean-Pierre Léaud’s Colin and Juliet Berto’s Frédérique are perhaps the most visible instigators, and their investigative presence is echoed at various points in La Flor, most notably with Casterman in episode 3 and Gatto in episode 4. But to suggest that the other characters involved aren’t attempting a similar form of exploration would be inaccurate; in many ways such exploration is the attempt to make sense of their world, whether in an intellectual, artistic, or other such pursuit. Thus, the extended theatrical exercises explore both in a literal sense for the viewer, testing — pleasurably for some including myself, negatively for many others — the bounds of duration and observation, and in a more ideological sense, with each motion conjuring its own strange reflection and inflection.

As it is for one masterpiece, so it is for the other. The creative relationship that eventually created La Flor stemmed from Llinás attending a play in 2006 put on by Gamboa, Carricajo, Paredes, and Correa as part of their theater troupe Piel de Lava (which is still operating today). Inspired by the quintet’s shared love for fiction in almost primoridial form, Llinás’s intention was, according to his Cinema Scope interview with Jordan Cronk, to “make pictures with them a genre in itself. So that’s when I had the idea to make one picture that would be all the pictures — every picture.”

Despite these origins, La Flor conspicuously eschews the overtly theatrical moments of Out 1 — which, among other things, is driven by a bevy of similarly transcendent performances, although they stem from multiple traditions including cinema (Léaud) and theater and involve a larger, more consistently characterized cast — or the Shakespeare-riffing oeuvre of Llinás’s compatriot Matías Piñeiro, who (along with nearly every figure in Argentine cinema) helped out on the film and whose films have featured Paredes and Carricajo. Instead, Llinás’s concerns appear to remain consistently cinematic; though certain other artistic traditions are invoked like the music industry in episode 2, and he himself describes a strong affinity with painting, such influences are inherently associated with the artifice that the cinematic apparatus provides.

This extends to Llinás’s visual schema, which favors extreme close-ups in shallow focus, frequently abstracting the background, both items and faces, into a textured blur. This approach, which remains more-or-less constant for at least the first three episodes, and opens up only slightly in the rest of the film, was adopted in large part due to the limited budget, offering the potential for suggesting things like killer cats, explosions, and the like. But it also feels truly indicative of the sense of exploration involved in the film; the rack focus is the most obvious element, holding on a solitary face in the very immediate foreground for an unconventionally long time before shifting to the background to allow the viewer, previously waiting in anticipation, to see the reaction. At every single juncture, the viewer is invited in to participate in this strange and long endeavor, to piece together both the moment-and-moment interplay and the larger connections that La Flor weaves. 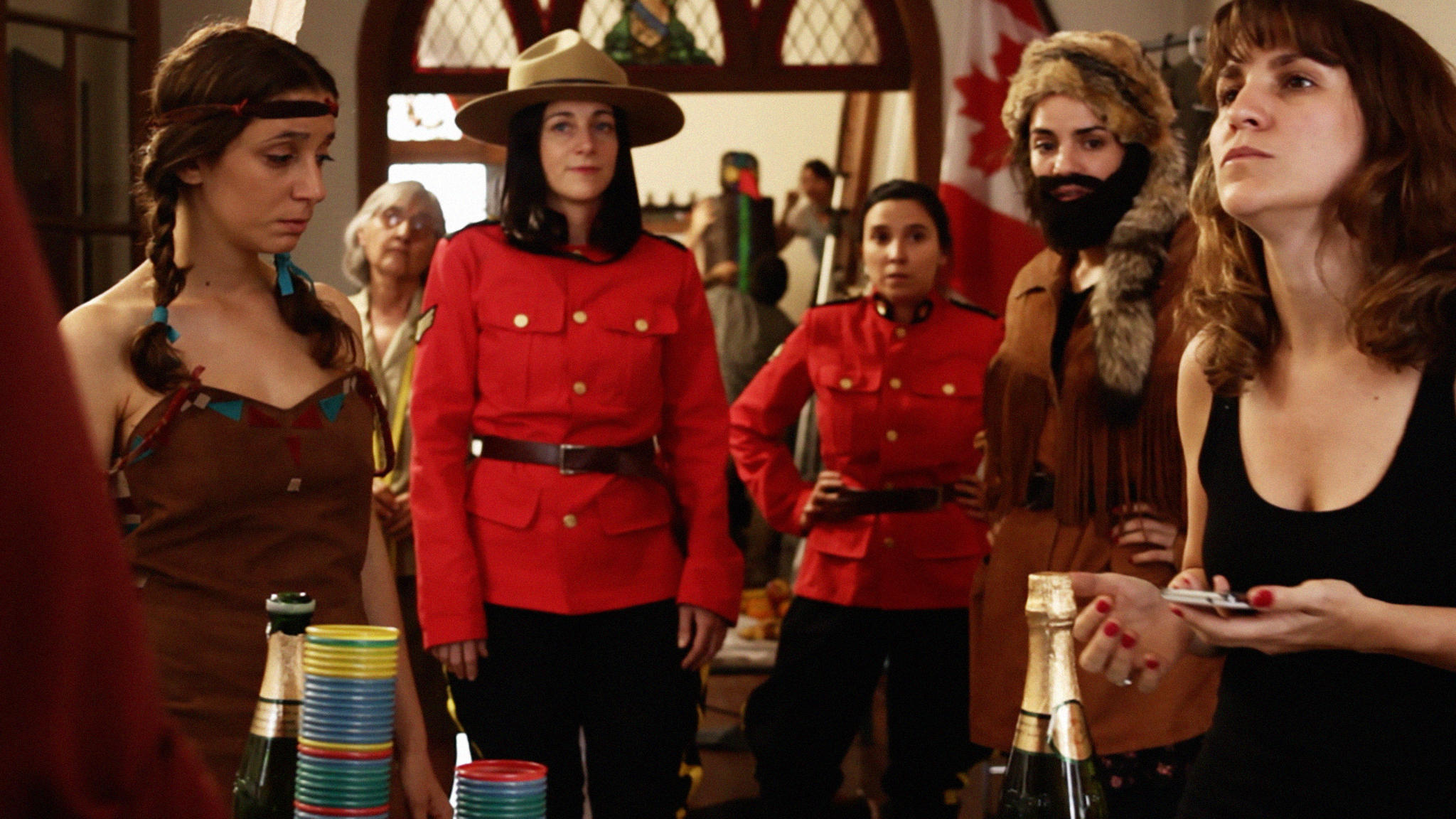 This expansive view translates to the film, which both pushes boundaries and consciously returns to past “outdated” forms, exploring both the concrete past and ephemeral future of cinema. That the central actresses had little cinematic experience (Llinás: “most of them had not even shot one picture. So we had to make their career. This picture would be their career. You’ve seen their lives, and through these images you now understand their process.”) only furthers this sense of a past (invoked in the long-standing collaboration the actresses had) and future (the episodes that these women and Llinás will continue to make, and which the viewer knows are to come) existing simultaneously.

Even the actual text of the film bears this out: in episode 3, each of the four women’s characters gets her own “origin” story. Though they all end up as spies, their narratives leading up to the point when the viewer first meets them differ drastically in both narrative and generic treatment: Gamboa’s is a traditional spy plot, complete with double and triple-agents; Correa’s is a South American revolutionary legend; Paredes’ is one of doomed, unspoken attraction between two assassins, and incidentally one of the best love stories I’ve ever seen; and Carricajo’s is an arduous mole hunt through Siberia. Each of them is brought to embody the force of these genres, and in placing them as part of the same group synthesizes them into a heterogenous blend; as with the episodes, the individual stories fascinate and move, but their impact is exponential when placed together. One of the many unspoken arguments brought forth by La Flor, and one of the most moving, is that each of these modes, whether it be a B-movie or a remake of one of the most iconic films by one of the greatest directors, has its place and should be recognized for its genuine worth in the cinema.

For this reason, though it is certainly possible to do so, it seems unwise to watch any of these in total isolation. Their cumulative impact operates on an emotional level, whether it comes in the levity of the first scene in episode 4, where the actresses (playing a version of themselves) openly bemoan the French dialogue they had to speak in the previous episode (both in La Flor and in La Araña, the film within the film) or in the genuine appreciation of Llinás’s personal appearances, as he thanks the audience for their patience in watching his film. Perhaps most open-hearted of all is the final passage of episode 4, where the four actresses appear by themselves amid nature. Scored to the second movement of Ravel’s Piano Concerto in G major, it is no simple portraiture: each of them are obscured in some way, whether it be by their distance from the camera, their facing away from it, or the foliage in the way. It is, like many of the greatest moments in the film, revealing, mysterious, slightly embarrassing, and transcendent all at once. This, perhaps, is the greatest achievement of La Flor: a 14-hour film that lacks any trace of insincerity, pompousness, or bloat, instead emerging in every single moment as a monument to a vision and to four immensely talented actresses. May it last forever.