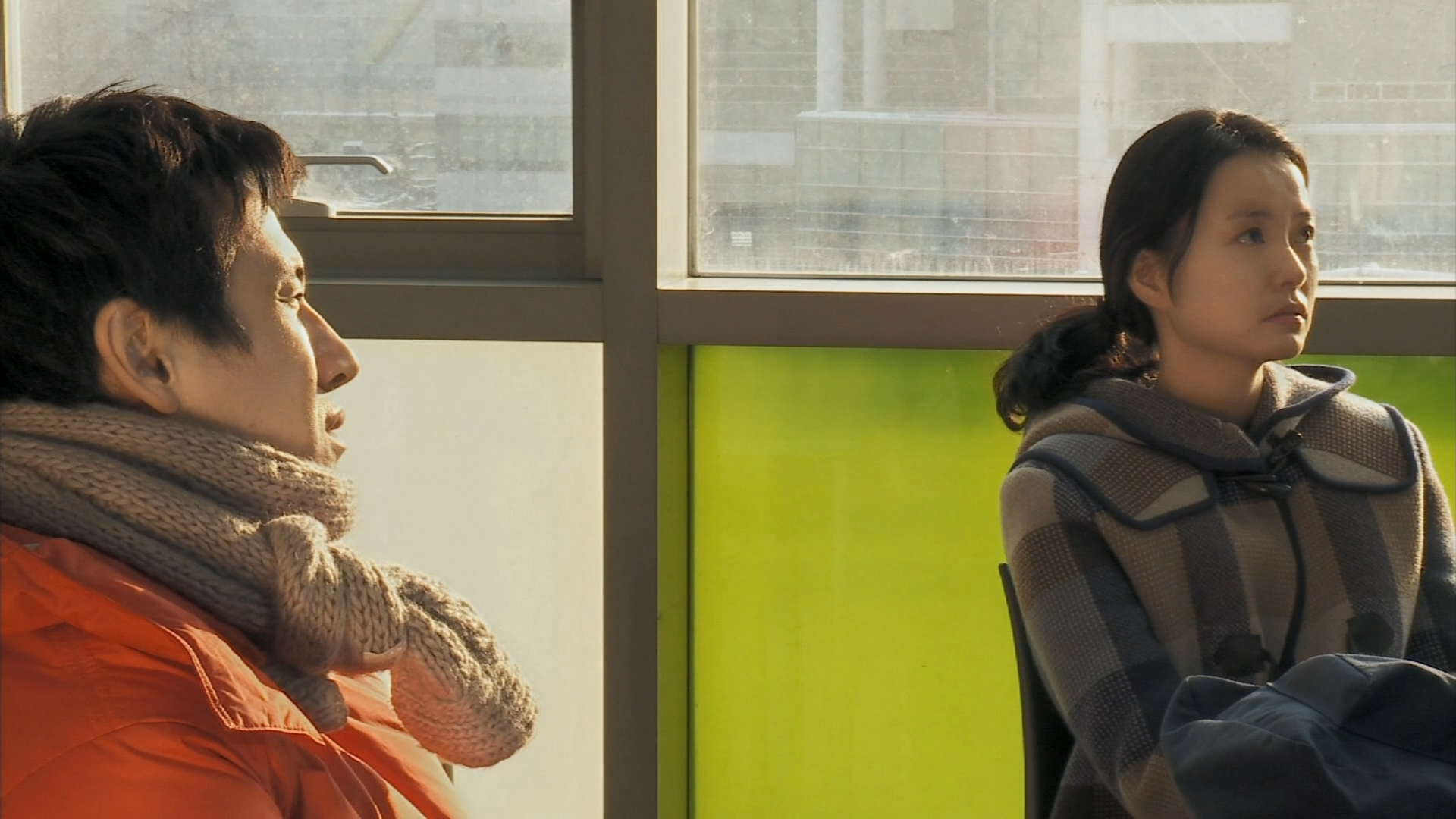 Something that I didn’t truly appreciate about Hong until this viewing project is how his films maintain a similar level of ambiguity while subtly changing their methods of conveying that, especially across the early, middle, and late periods. The early periods, while certainly operating according to a clear structure, largely eschewed a full disruption of its diegesis, instead constructing repetitions through little events while keeping a comparatively comprehensible sense of narrative. The middle period films, or at least these first two features, instead totally disrupt conventions by making narrative drive come through decisive junctures that nevertheless flow together; the mystery instead comes from conversation, from the puzzle-like nature of relating them to character. Oki’s Movie is the clearest example yet, something which almost threw me the first time even though I knew the four-part, almost anthology nature of the film going in. Its genius lies in how it accesses emotions and allegiances through withholding, never making the full design apparent but finding beauty in the pieces.

I had also totally forgotten how, at least for the majority of the film, Oki isn’t the main character, and indeed doesn’t even appear in the first part, A Day for Incantation. (I should note here that Wikipedia’s plot synopsis assumes that this is the only part that takes place in the present, with at least part of the film a flashback; I disagree.) Instead, Jin-gu is — aside from a few cutaways to Oki’s/Og-hui’s experiences during the second part, King of Kisses — the main character of the first two parts, which constitutes the first 55 minutes of this 80 minute film — the first Hong that can truly be said to be shorter than an ordinary feature — and are both considerably than the last two parts. The third part, After the Snowstorm, Song’s perspective, takes up just less than ten minutes, while the last part, Oki’s Movie — not the last time the actual title of a Hong film will appear onscreen late into the film — runs about fifteen minutes.

Without this foreknowledge, one might easily anticipate something edging closer to early Hong, albeit in a more overtly reflective context: Jin-gu’s insecurities about his position as a professor are reminiscent of The Power of Kangwon Province — there’s even another bottle of Blue Label, though this one is actually drunk onscreen — but there’s just as much emphasis placed on the nature of art itself and how it ties into forces both economic and personal: the odd relationship he has with his wife and the total mystery of Yeong-su, notably she repeats the admonishment to not make promises that he couldn’t keep from Like You Know It All; Song’s bitter statement that “film as an art is dead” worldwide and that “only books will save us” dovetails into Jin-gu’s insistence to his berated student — the use of voiceover for her script is oddly lovely, the only voice that’s not one of the main characters — that he’s trying to teach her how to survive; the outrage that Jin-gu experiences when Seo Young-hwa takes his picture almost suggests something of the old superstition that photography would take someone’s soul; and of course the Q&A scene. It at least initially begins with a genuinely (if alcohol-fueled) insightful preference to focus on pure reaction as a viewer of films, saying that the impulse to focus on themes is taught and puts all the interesting themes about films is something of a funnel; like the classroom scene in Like You Know It All, I have little doubt that Hong believes much of this.

The rest of the Q&A scene, however, is as mortifyingly hilarious as anything Hong’s done, the ultimate “comment not a question” that’s probably ever been conceived of. Even though it only lasts for about three minutes, it seems to stretch out longer, and it’s crucial that, even though the woman keeps prodding him, Jin-gu is the only one onscreen once the initial accusation is made. Since this is a Hongian man, it’s almost certain that such an interaction did take place, but it’s so agonizing that it’s no wonder that Hong moves on immediately after; the moderator intervenes a few minutes too late.

King of Kisses, then, virtually plays as a mirror of the first half of Virgin Stripped Bare by Her Bachelors, a slow-building seduction, though the sight of Jin-gu huddled on the stairs outside on Christmas Eve, with Oki emerging in a Tweety blanket, is priceless (as is the repeated use of “Pomp and Circumstance” throughout Oki’s Movie, a film about university where no one graduates). But here, too, much more emphasis is placed on little parts that would be almost extraneous to an earlier Hong film: the mystery of Oki’s friend who dropped out, why Oki couldn’t finish her film, Song recanting his praise of Jin-gu’s film. Indeed, the inference is that the first part was, effectively, Jin-gu’s short that he had shown the professor. There’s almost the temptation to treat Oki’s Movie like Hollis Frampton’s “(nostalgia),” where his short in the first part is left off-screen and each subsequent part playing as a response to the one that came before it. Alternatively, the short could be Oki’s Movie, thus making the film an odd Möbius strip (though that seems unlikely), or even “Lost in the Mountains,” which itself is a mirror of the Jung-Moon-Lee triangle — Kim Jin-kyung, the fourth point on the rectangle from “Lost in the Mountains,” once again plays Jung’s friend, though she’s outside of the entangled relationships here — though it being described as a reflection of Jin-gu’s perspective makes this unlikely. The milk carton is in some ways a useful encapsulation of the film: why is this part here, and how can something so small change the entire universe?

That same question could be applied to the third part, which is in some ways an even more radical shift than its predecessor. While Song has technically appeared in more of the film than Oki, he was always clearly situated as a secondary character, someone to be looked up to. This reframing is partially helped by seeing him in a classroom that looks more akin to one for grade school than film school; for the first half, he is left adrift without his students, eating a sandwich and using the restroom. The reappearance of the professor who left the school while castigating Song in the first part is another surprise, as does Song’s apparent subordinate position to him; whether this is how Song sees himself, or a greater understanding of the situation that Jin-gu doesn’t have access to, is left unanswered. Once Oki and Jin-gu arrive, the dynamic totally shifts, and the impromptu Q&A session reminded me of, of all things, Jean-Pierre Melville’s scene in Breathless, these short, almost koan answers to questions; Oki’s question about whether they’re human beings or animals calls back to both Hahaha and On the Occasion of Remembering the Turning Gate. The sight of Song vomiting up an entire octopus, along with the zoom-in on it, is both gross and somewhat liberating; the text messages that the two students are genuinely sweet, while also hinting at Oki’s possible affair with him.

The sense of liberation that Song possesses upon quitting teaching is immediately refracted in Oki’s Movie. Her use of constant reflective voiceover, constantly highlighting the similarities and differences between the two days, two years and a day apart — weirdly similar to the Before Trilogy — reminded me of both Varda and, of all people, James N. Kienitz Wilkins in its interrogation of what these images mean. Like Hong’s films to come, two similar events are placed side by side, the disjunctions helping us in some ways to reckon with our recollections. The tone is truly serene, only really interrupted by the argument Oki and Song have — as an ironic side note, despite the frequent mention of Jin-gu’s heavy drinking that’s even demanded to be cut down by his wife, this is the first Hong without soju in it. Maybe most striking of all is the relative talkativeness of the first day, the feeling of connection that was severed at an unknown time in the intervening years; it’s so touching to hear how Oki enjoyed being held and the genuine joy on the three characters’ faces, even as the viewer knows that it’s all in the past. The third-to-last shot is maybe my favorite in Hong so far: it initially begins as the long-awaited accompaniment to the shot of Oki waiting for Song outside the restroom; then it pans over to Song in the distance, clad in a long overcoat and wearing an enigmatic yet understanding smile as he walks off; then moves back to a stricken Oki. The simple choreography of that shot that nevertheless connects back to so much is basically breathtaking.

The closing voiceover, which nominally is Oki’s reflection that this means of reflecting her guilt and exhilaration on the occasion of remembering the two days, then brings the meta-nature of Oki’s Movie into full tilt. The viewer is led to question whether we have actually seen Oki at all, and whether this entire film is a project undertaken by three or four directors who use and reuse actors in the same or similar roles. Certainly, the use of opening credits for each segment — amusingly laid out like a slide projector — would support this. The voiceover does sound like Jung to me, though of course Oki could have had her actress voice her. Said questions are left blessedly unanswered, and the viewer is thus put into the drifting mindspace of Oki herself, having gotten to reflect on some things while pondering the essential questions in life: why is this thing in the universe? how do you control your sex life? why do you love someone? Song answers that for everything important in life, he doesn’t know the reason for it; Hong recognizes the ultimate limits, but by placing all these fragments together Oki’s Movie brings us closer to understanding.