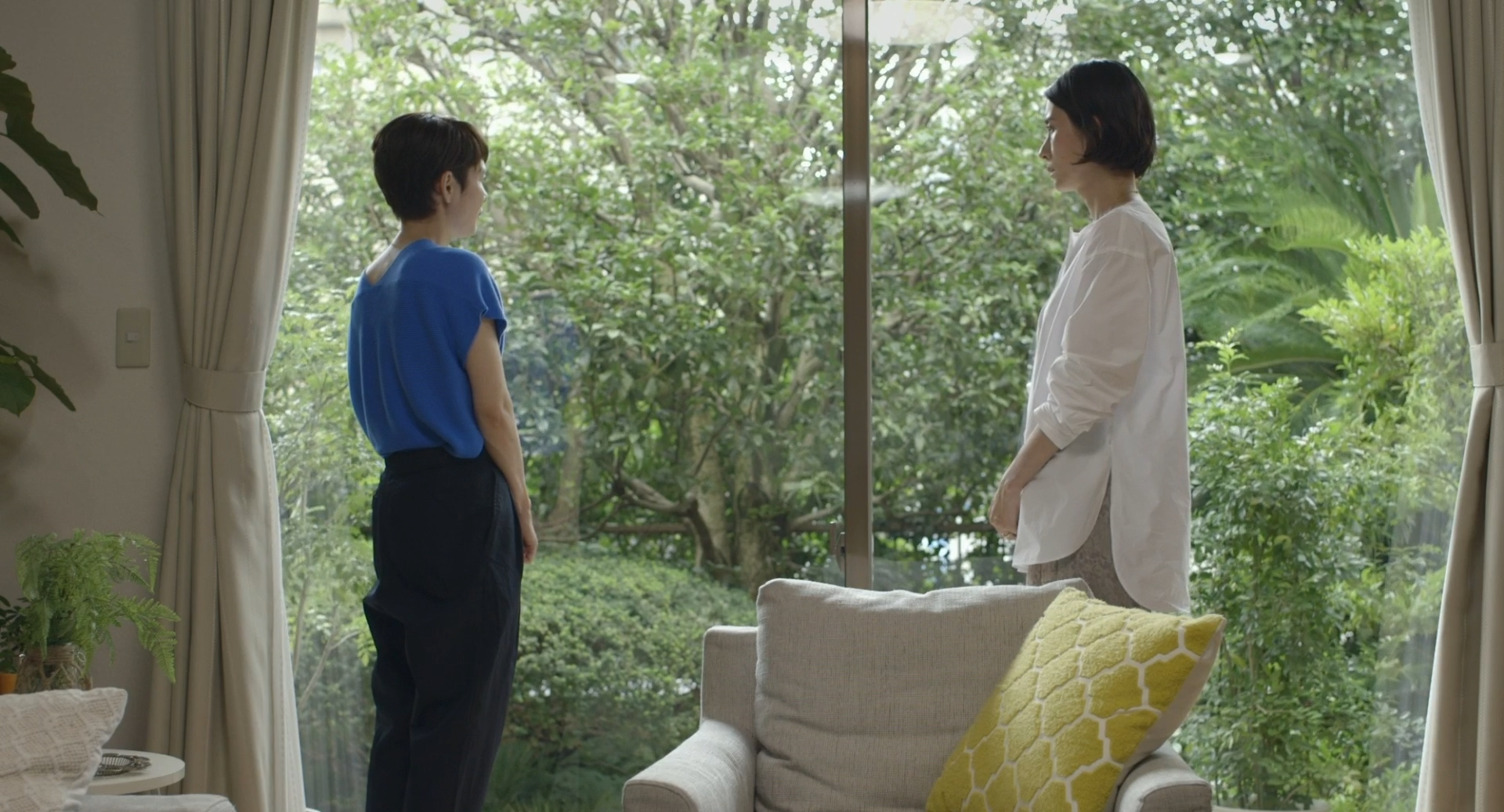 Wheel of Fortune and Fantasy/偶然と想像/Gūzen to Sōzō

The omnibus structure, as deployed by just one (or two) filmmakers, has seen something of a resurgence in recent years. 2018’s La Flor (Mariano Llinás) and The Ballad of Buster Scruggs (Joel & Ethan Coen) both utilized this conceit to fascinating and rejuvenating ends, with the former in particular using the multiple stories as a reflection of its deliberately protracted and endlessly generative production process. It’s no accident that genre and, more obviously in the case of Ballad, storybook framing are central to the conceit of these two films: it’s a handy way to connect what might otherwise be seen as disparate stories, and to give them a clarifying purpose that is then elaborated upon and deepened in the actual films.

Hamaguchi Ryūsuke has opted for a similar model of storytelling with his first film released in 2021, Wheel of Fortune and Fantasy. Hamaguchi, whose meteoric rise in the span of just three (or four) feature films beginning with Happy Hour (2015) — after a lengthy incubation period in cultural institutions — has him poised at the highest echelons of the film festival world, professes little anxiety when it comes to the influence of his forbears: he has explicitly said that the three-part structure of Wheel comes from Éric Rohmer’s Les Rendez-vous de Paris (1995), another single-director omnibus film. Likewise, given Happy Hour‘s mammoth five-hour running time and lengthy performance sequences, critics have cast the phantom of Rivette over Hamaguchi’s work. But a better place to begin reckoning with Hamaguchi’s work might be his moderately overlooked Asako I & II (2018), still his best film to date and a miraculous evocation of the glories and tribulations of modern love. Adapted from a novel, it finds its inspirations and intricacies from within its generic conventions, lingering on the moments in between in order to create a better understanding of the world.

Wheel of Fortune and Fantasy functions in a similar way, taking as its genre of choice a particularly quiet and concentrated version of the woman’s picture, which Hamaguchi explored in a different manner with Happy Hour. Over the course of its three stories, which each present a slightly modified version of a codified structure, Hamaguchi follows three women and their interactions with others that hinge as much upon the interventions of the outside world as their own concerns and histories. Numerous connecting threads emerge, starting with the structure: the first segment contains two long conversations followed by a coda, the second has two short conversations with the same man as bookends to one long interaction with a different man, and the third focuses more-or-less entirely on a single day spent with another woman. But the throughlines run deeper than that: the age of the main character increases with each segment, going from the mid-twenties to early-forties; each protagonist becomes more and more visibly lonely or unsure of herself; technology is only invoked when absolutely necessary (in the middle segment), in favor of a focus on speaking.

It is in the realm of dialogue and especially reaction that Hamaguchi thrives, and what draws him in many’s eyes close to the realm of Rohmer and/or Rivette. The first story, in which the protagonist remains largely silent during the first conversation and then explodes into a volley of words in the second, is exemplary of this; her dawning realizations and hairpin turns of emotion fold directly into the oblivious yet transfixing retelling of a magical night that her friend is relating. Likewise, the professor in the second section manages to convey arousal, trepidation, and wonder all at the same time without letting one sensation predominate. Balance and recognition of the possibilities that each character in a conversation can provide remains key; just because one character in any given moment is pensive or silent does not dictate what their future actions might be. This isn’t to say that the characters exhibit uncharacteristic behavior; the essence remains the same, but Wheel of Fortune and Fantasy‘s figures are sketched to be as complex and multivalent as any characters in recent fiction, in large part because the scenarios are so quietly odd — in a manner similar to the central conflict in Asako I & II — as to allow them to bounce off each other in unexpected ways.

That level of surprise, of course, also extends to the interventions of chance, which take the form of interruptions, unanticipated encounters, and even a computer virus that remakes the world in the third segment. Though thoroughly logical, they remain unexpected, both in their masterful deployment at key junctures and in their unfixed purposes, often serving to either bring together or tear apart the protagonist and her scene partner. Hamaguchi is frank, if not quite unsparing in his recognition that the world often cannot accommodate the fantasies of one individual, though it’s well worth noting that said dreams are often knotted themselves, compromised by each person’s own doubts and worries.

This growing disquietude comes to the fore in the third and greatest segment; while the previous two resembled something more akin to a Rohmerian moral tale, and all three possess a directness of emotion that was downplayed in Happy Hour and Asako this third segment uses it towards evermore mysterious ends. A tale of mistaken identity and thwarted reunions that then morphs into a stunning set of twinned confessions and reconciliations, its distillation of decades of irresolution into one afternoon would be unfathomable apart from Hamaguchi’s sense for conversation, and the dynamics of each scene. Often shooting in long shot as the two women talk to another, he carefully portrays the shifts in posture, the particular timbre of their voices, letting the scene unfold with a quiet precision. Each story ends with a distinct manner of grace, no matter the seemingly temporary defeat each woman has been dealt. But it is here, in this chance encounter, that Wheel of Fortune and Fantasy finds its most salutary acceptance, through a bond forged by speaking and listening.