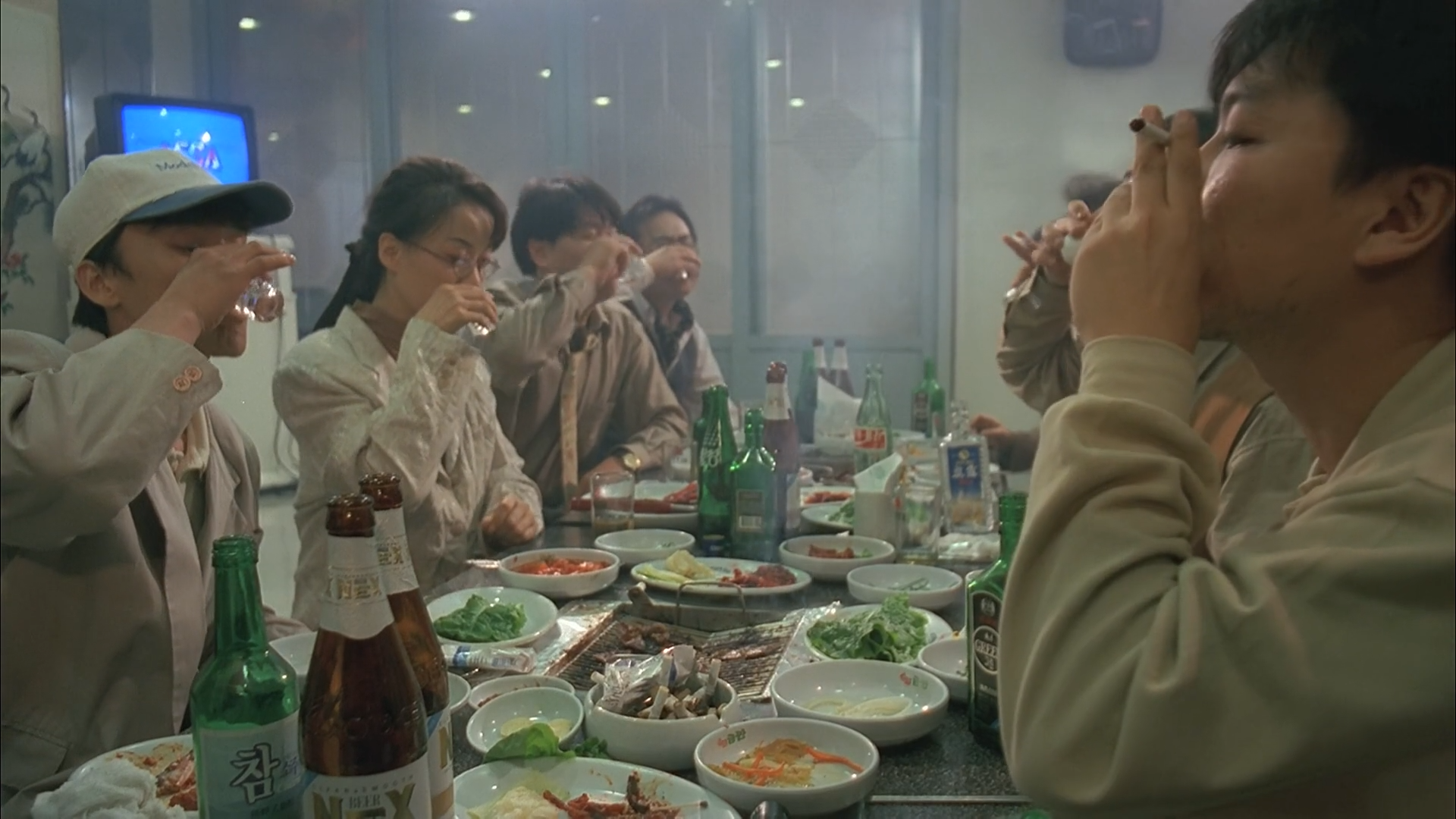 It’s always bracing to return to early Hong, considering the relative misanthropy unleavened by the humor that surrounds them. The Day a Pig Fell Into the Well, as his debut, especially falls into this pattern, but I forgot how relentless the unpleasant interactions are here, which compound in such a way that it almost gestures at the surreal structures that would take root soon in his work: a client who keeps appearing to be out-of-town, a sex worker who shows up immediately after a glimpsed moment of lovers quarreling, a pestering movie theater owner. Korean Movie Database also says that this was originally a novel by Koo Hyo-seo, and that four other writers in addition to Hong worked on its adaptation.

The first shot is a restive shot of small fruit that Hyo-seop, the only typically Hongian main character in the film as a bumbling novelist — fittingly played by Kim Eui-sung, the only Hong regular but who nevertheless doesn’t recur until much later — steals from his neighbor’s rooftop garden. There’s another potted plant outside a coffee shop later on, but unlike On the Beach at Night Alone or Grass there’s a different subject: an insect scurrying around that Hyo-seop is poking at.

Sex is common in Hong’s early films, but the frequency here is surprising, though it dovetails at least somewhat with the need for each of the four protagonists to find intimacy; the one that really sticks out is the atypical use of sex as punctuation, where a friend of the second protagonist (Park Jin-sung) ostensibly refuses to take him back to the office he’s visiting because he’s waiting on an important fax, only to have very loud and explicit sex with his wife; the last time both characters are seen. The Korean hentai(?) is also a nastier touch than usual.

The four-part structure is more pointedly deployed than I remembered, charting each part of this love rectangle; I had assumed that it was just a network narrative of people meeting by chance, and thus the return of various characters, especially Park’s and Lee Eung-kyeong’s, was rather deftly deployed. It also allows for there to be a ton of food scenes, though the only one that feels lingered on in the traditional Hong way is the Korean barbecue scene, which is presumably the only time Hong will film actual fighting, as fittingly sloppy as it is (with wild handheld to boot). And I’ll never not be amused by seeing baby-faced Song Kang-ho as the cool friend; love the unexpected inclusions of Western culture via Wendy’s, The Simpsons, the Beatles’ “Old Brown Shoe,” and The Shawshank Redemption.

As far as I can remember, this is the only Hong film that has tracking shots, seven in total, though none of them are extravagant and they’re mostly used as little push-ins, which nearly presage the zoom shots. There’s also two dissolves, both deployed on bus-rides, which only crop up again much later. Some moments of shot-reverse-shot, but it never really feels like true continuity shooting; characters are allowed to speak their full lines before cutting, and while there are probably more shots in this than in the last five Hongs combined, a fair amount are inserts on objects or establishing shots.

For all the gloominess here, there’s a certain warmth to little interactions that brings it a little closer to later Hong: the man who Kim gives money to in jail (weird to see Hong film a courtroom), the apple-eating and odd barricade-hopping that Kim’s former friends do immediately after leaving for drinking, the general relationship between Cho and her coworker.

I forgot that this remained a little bit more ambiguous concerning whether Kim and Cho Eun-sook were actually killed in the ending (though presumably Lee is actually talking with Kim on the phone in the end, rendering it a dream sequence), and in general the apparent Taiwanese New Wave influence of Edward Yang and Tsai Ming-liang is even stronger than I remembered; the last scene is a virtual mirror of The River, with some calm laying-out of newspapers for extra measure.