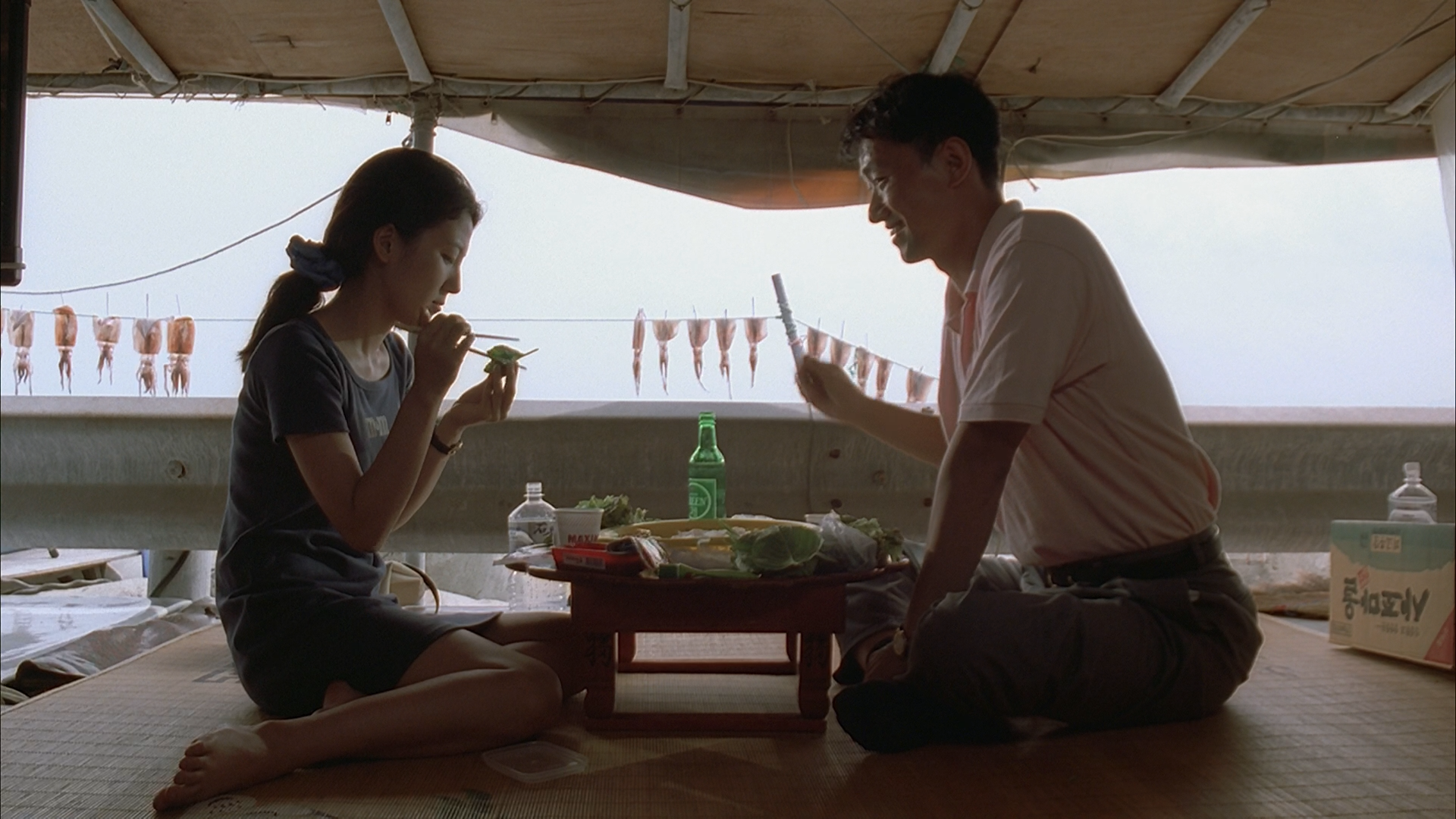 This was maybe the Hong I had the least memory of before this most recent rewatch, sandwiched as it is between his debut and arguably the first film that fully deploys his rapidly developing trademarks. But The Power of Kangwon Province really does feel in a way like his second debut film; not only is it the first film that he wrote the screenplay for solo, but it also exclusively features the static shots that defined his films for a number of years, along with a more in-depth approach to character than the four-part The Day a Pig Fell Into the Well arguably allowed for.

The first drinking scene arguably epitomizes all of these: the scene begins in media res, with Ji-sook berating Mi-sun for perceived personal slights instead of merely being a lousy drunk. The conversation flows at Hong’s more deliberate pace, and in general he seems to spend more times on these meals or drinks, in contrast to the flurry of restaurants in the previous film. He still cuts in and out on the shots though, including effectively a shot-reverse-shot as Eun-kyoung leaves the table. The scene of Ji-sook totally drunk as the cop is dragging her off the sidewalk is very fun though, and it’s worth noting that they appear to be drinking bokbunja raspberry wine, which I don’t remember seeing in a Hong before and which has apparently been scientifically proven to improve male sexual stamina.

Baek Jong-hak is apparently the only actor who appears again in a Hong film (I think as one of the sycophants in The Day He Arrives) but I was unexpectedly really transfixed by Oh Yun-hong as Ji-sook; maybe it’s because she’s the first of the protagonists to appear and the women in The Day a Pig Fell Into the Well, by appearing third and fourth, felt somewhat subordinated and constrained by their limited appearance. There’s something about the particular triangular friendship dynamic on vacation that feels strong, especially that early scene of them singing “My Darling Clementine” on the beach together, and which allows the frustrated relationship and fraught return to Kangwon to take on an additional resonance. It has a certain compactness, running about 40 minutes, that Sang-kwon’s much longer section can’t really have; that contrast almost embodies the difference between late and early Hong, respectively.

In general there’s a strange preoccupation with fish here, an overarching metaphor that imbues them with an overtly symbolic quality not often found in Hong’s structures. The two fish that become(?) one, the consistent consumption of fish, sea squirts, and dried squid; not exactly sure what it means, along with both Sang-kwon and Ji-sook nearly getting hit by cars pulling out of parking spaces.

The overlapping structure really is done well; Jae-wan’s order in the train car is lingered on long enough that I instinctively sensed that it must have a significance, but it doesn’t wrap around until 20 minutes into Sang-kwon’s section. There’s a certain slackness wrapped up once again in questions of employment (it’s never exactly specified what Sang-kwon teaches, intriguingly), but the vacation and its possibilities helps a lot of his interactions.

Some interesting bits of Western culture floating through this: a barely glimpsed The People vs. Larry Flynt poster, an Optimus Prime action figure, the Russian club workers, Ji-sook’s M&M shirt, the Dallas Cowboys shirt that Jae-wan wears, the use of Lou Reed’s “Perfect Day.” There’s also a scene where Sang-kwon has something stuck in his eye, decades before Hong’s recent eye problems, and a cutaway during the first drinking scene to a lamprey a la Drive My Car.

Hong’s morbid invocation of death continues here: death by falling is invoked three separate times, including the genuine possibility that the cop might jump after being rejected by Ji-sook. The inclusion of the woman pursued by Sang-kwong and Jae-wan, aside from serving as another point of connection between the two vacations like the sea squirt restaurant (that Hong took much further in Hahaha) does feel a little thinly conceived, though the last conversation they have is good.

The shots on top of the mountain are honestly kind of stunning, including their incorporation of the actors and the distance, it makes me wonder if Hong might have considered a more self-consciously picturesque approach at one point (not to say that he doesn’t use his landscapes later on well). It’s also worth noting that Kim Young-chul won Best Newcomer in Cinematography at the Grand Bell Awards (South Korea’s Oscar equivalent).

The resolution, involving Ji-sook returning to Sang-kwon presumably after her failed connection with the cop, exists once again in a more ambiguous place. I’m inclined to think it’s real, because it’s lingered on more than usual for Hong’s dreams, though in general it has a nice mysterious quality, invoking a past history we aren’t privy to, having arrived upon them after their relationship already ended.