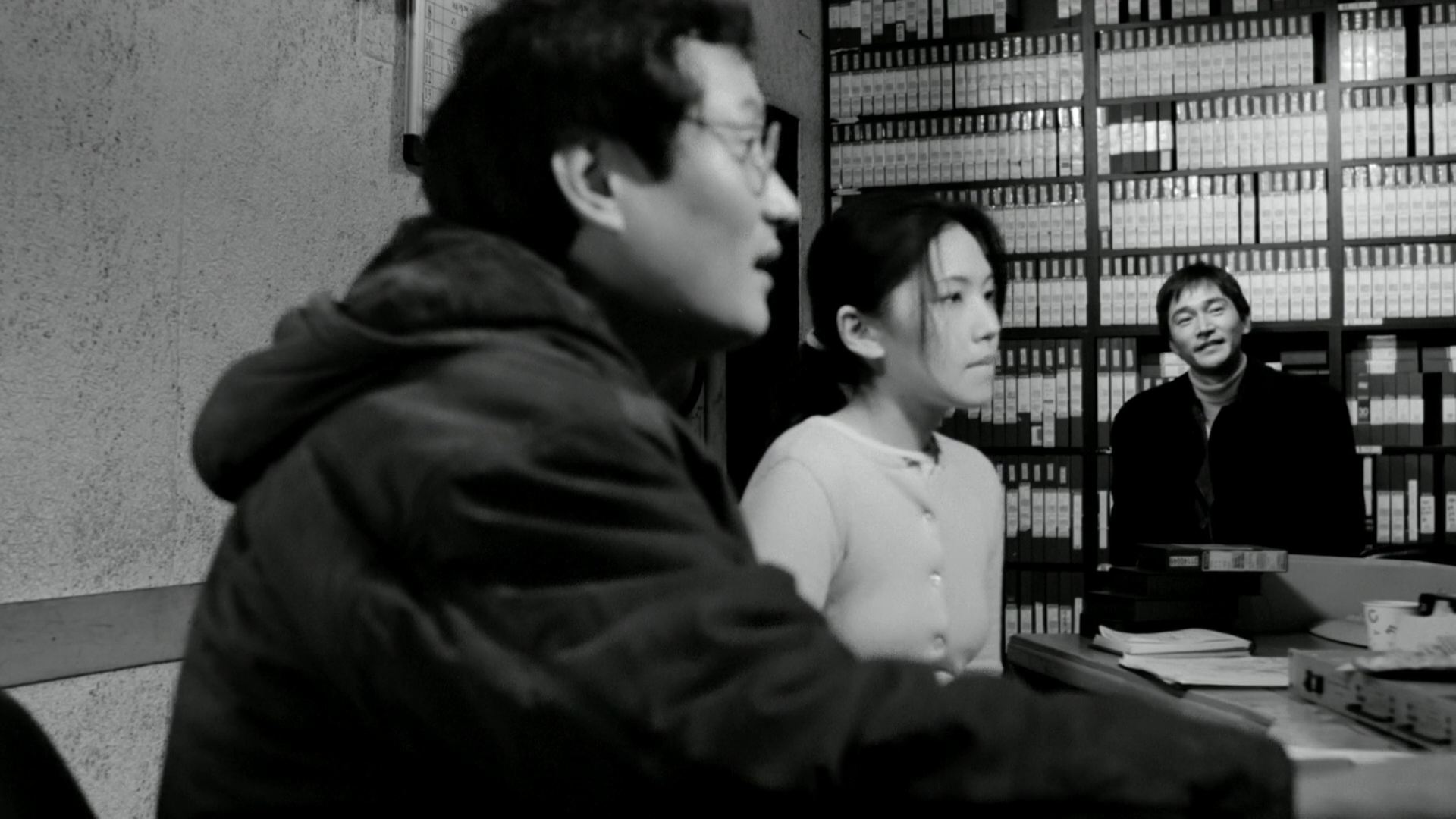 Virgin Stripped Bare by Her Bachelors is almost without question the first Hong (chronologically speaking) that most acolytes love, and especially on this rewatch for me it certainly resonates in the same way. Numerous hallmarks make their first appearance here: it is his first film in black-and-white (and only one this decade), his first about filmmakers — even if they appear to be more industrial, hoping to create their own films one day — and, most crucially, his first to use the kind of puzzle-box structure that overwhelmingly defined his films until recently. While The Power of Kangwon Province did have its overlapping structure, it’s used here to question, or rather rupture the reality set forth in the first half of the film.

The repetition of events, misleadingly helpfully labeled by numbered chapters — Jae-hoon’s chapter 4 is missing from Soo-jung’s, who has an added-on chapter 7 — invokes the difference in telling and/or perspective immediately, with Young-soo bolting from the table to go to the restroom instead of Jae-hoon. Additionally, the conversation about Jae-hoon formerly being able to drink 5 bottles of soju and 3 bottles of whiskey is shifted forward two chapters to fill the gap. What’s more ambiguous, in a productive sense, is the import: in general, the innocence or guilelessness of each perspective character is emphasized, as is the central unknowability of their counterpart. This makes the coda all the more strange: the finally-consummated sex is as raw and painful as hinted at before, but the bridge is slowly gulfed during both the sex and the eventual understanding with the bedsheets; the final shot is a sort of uneasy bliss, which jettisons potential other complications like Young-soo in favor of promises to do better. Because this is a Hong film, it’s definitely up in the air whether those promises will or can be met, and Soo-jung’s face is appropriately ambiguous, half doubtful and half reverie.

This is also the first Hong film where the English title, which appears to reference Duchamp, differs from the Korean title, the much less bleak Oh! Soo-jung. Besides reminding me of Powell-Pressburger’s Oh… Rosalinda!! (which I haven’t seen), it gets a pay-off with Jae-hoon’s utterance of the wrong name. But in its own way it carries a certain ambiguity: the oh! could be one of ecstasy and release or frustration and incomprehension, reactions which all occur throughout the film. It’s also one of the few named after a specific person, though there will be more later.

This film presents two distinctly contrasting actors in its main trio. Moon Sung-keun, one of Hong’s greatest stalwarts, makes his first appearance; even though he’s already almost 50, it’s disconcerting how he almost appears young compared to his later appearances; the wrinkles haven’t quite set in, and though he has a family it’s only invoked a few times. On the other hand, Lee Eun-ju, who won the Grand Bell for Best New Actress, died by suicide five years later at only 24, one of a few Hong actors who suffered an untimely death. She has something of a Kim Min-hee quality about her, especially in the second half, a certain radiance that was gone too soon. (Jeong Bo-seok is much better known as a television actor, and only sparingly appeared in films in the 2000s before leaving cinema altogether.)

According to the translations on my file, the chapter titles translate to, in order, “day of the waiting,” “or an accident,” “cable car suspension,” “a moment impulse,” and “primary.” I can’t pretend to be certain about what the second, fourth, and fifth chapters translate to, but in a certain sense the abstruseness is the point, given the wildly divergent events of certain chapters. And it’s appropriate that some of the dangling threads (especially Soo-jung’s apparently incestuous relationship with her brother and her claim not to wear a bra) are left unfulfilled, as suspended as that cable car, one of the funniest moments in Hong so far.

The black-and-white here really is gorgeous, and it’s something of a shame that this is the only one that he shot on film; I remember being totally entranced by the ice lake that Jae-hoon and Soo-jung sojurn onto, but the darkness is just as striking, especially in their makeout sessions in that outdoor park. And while I can’t say for certain yet whether winter is my favorite Hong season (though probably the most distinctive), the blanketed snow and glaring light works wonders here. There’s also three tracking shots here, contrary to my recollection; the first two are a shot-reverse-shot, and the third follows Jae-hoon as he first loses Soo-jung.

Though the filmmaking aspect is fairly deemphasized except for how it can bring Soo-jung and Young-soo together, and how it can be used to both put the latter on a pedestal and knock it down, there are some interesting bits of business, like the general sense of rancor among the crew, Kodak no longer developing 8mm, and the mention of reusing locations. Also, there are some glimpsed movie posters — A Man and a Woman, The Untouchables, Betty Blue — and music references: Beethoven’s 6th (Pastoral) and Stevie Wonder; Soo-jung is the first of several Hong musicians. Sport also forms something of a backbone, between the playing of ping-pong and badminton (in winter!).

While the sexually explicit scenes are rougher and more fraught than ever, the emotional dynamics have risen to that same level, and in some sense the elision of certain scenes like Jae-hoon’s alleyway attempt function almost on a psychological level, parceling out the uncomfortable moments and/or displacing them onto one man or the other. In the end, though Young-soo disappears for the last 15 minutes, he functions as a valuable fulcrum, along which the film’s emotional and narrative shifts sway to and fro.

This is the first of presumably a number of Hongs that has markedly improved on this watch for the viewing project, and so much of it lies in the deftness of the structure, which only gets more mysterious the further it goes along (though I did love the second half of Kangwon more than I remembered). This, even more than his interactions, probably elevates his films the most, at least in his early period; I’ll be sure to track this possible trend going forward.