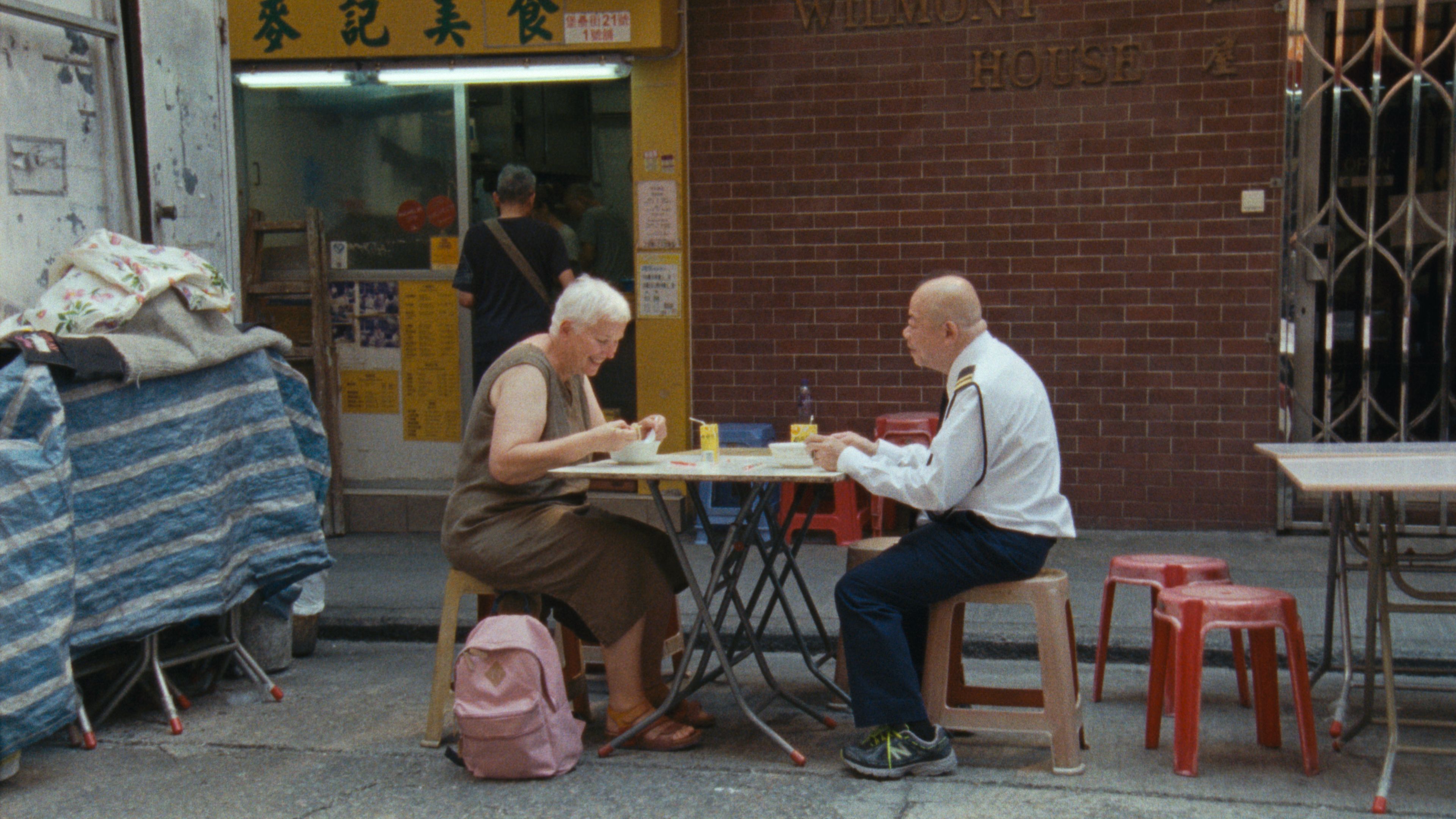 Without getting into the thoroughly litigated relationship between fiction and non-fiction, there’s always a certain charge when “unmediated” reality recognizably intervenes within a fictional narrative. The difference between, say, a group of extras and a crowd of random pedestrians can produce startling ruptures in the diegesis, and transmute the documentary qualities present within the act of filming to a wider consideration of time and place, of how society collectively chooses to interact with their setting and culture.

One of the most special parts of Jonas Bak’s feature debut Wood and Water is its play with this constant, and how casually it integrates what in other films would be the lynchpin of their concept. For while the glimpses of the 2019-2020 Hong Kong protests, seen both from high-above and briefly on the street, are moving and presented with a certain vital distance, it remains resolutely focused on its central character. Anke (Anke Bak, the director’s mother), who recently retired from her quiet work in a church office in rural Germany, has come to the city in an attempt to reconnect with her son. The 79-minute film makes its leap across the continents a third of the way through, only returning to shrouded trees in brief dream sequences.

While Wood and Water isn’t strictly based on a true story, it constructs its drive along two aesthetic and narrative parallel lines: the family relationship and the evocation of the countryside and the city. Essential to both is the fundamental sense of warm austerity that permeates throughout each setting and Bak’s style: while frequently light on dialogue and filmed in long shot, with trees and skyscrapers often totally dwarfing Anke in the frame, Brian Eno’s score and the hazy 16mm photography lends an entirely different feeling to either the wild dynamism or hard-etched grit that represent the greatest extremes of the region’s films before the turn of the century.

In forging this middle-ground but nonetheless adventurous approach, Bak extends the curiosity of his mother to the potential of discovery within Wood and Water. The ruminative conversations between Anke and various family members in the first third have their own immediate sense of intimacy, going on small tangents while emphasizing the drift of the rural setting. By contrast, the very first night in Hong Kong thrusts Anke into a shared hostel room, as she talks with the woman in her top bunk, another tourist about to leave the city after residing there for a number of years who is only seen in silhouette. Over an extended take, they speak much more tentatively yet concretely, and the much younger tourist piercingly comments that the aging mother’s story “is just beginning.”

This delicate balance between the old and the new becomes the unspoken engine of Wood and Water, whose own title refers to the Chinese fortune telling elements of wood and water. Anke is identified with water, signifying her nobility, with wood being her greatest deficiency. The advice to move to the forest is gently recognized as being inaccurate later in her conversation with her impromptu translator — an elderly social activist and former artist played by Ricky Yeung, the only professional actor in the cast — but the scene is just as moving in its presentation, long reams of unsubtitled Cantonese followed by translations, as it is in the observations the fortune teller does get right.

Most of the Hong Kong denizens Anke interacts with appear to be around her age, but Wood and Water is as much a present film as it is a nostalgic one, albeit a kind of modernity that both attracts and excludes Anke. She is seen either on the ground level, gazing at nearby actual protestors before walking away, or elevated in her son’s high-rise apartment, looking at the distant lights and tear gas clouds through glass. By the end of the film, a unity of thought and existence is demarcated, but it exists just as brilliantly in the transition between the two parts, two tracking shots through two tunnels. Another filmmaker would make it seamless, probably taking advantage of the darkness to disguise a cut. Bak instead opts to focus on the lights on the roof of the tunnel, as they pass by, fall into darkness, then switch to an entirely different design of lights to show the shift in location. Settings thus become two sides of the same coin, a commonality of purpose that is manifested with vastly different means, both of which are represented with the same wonder.