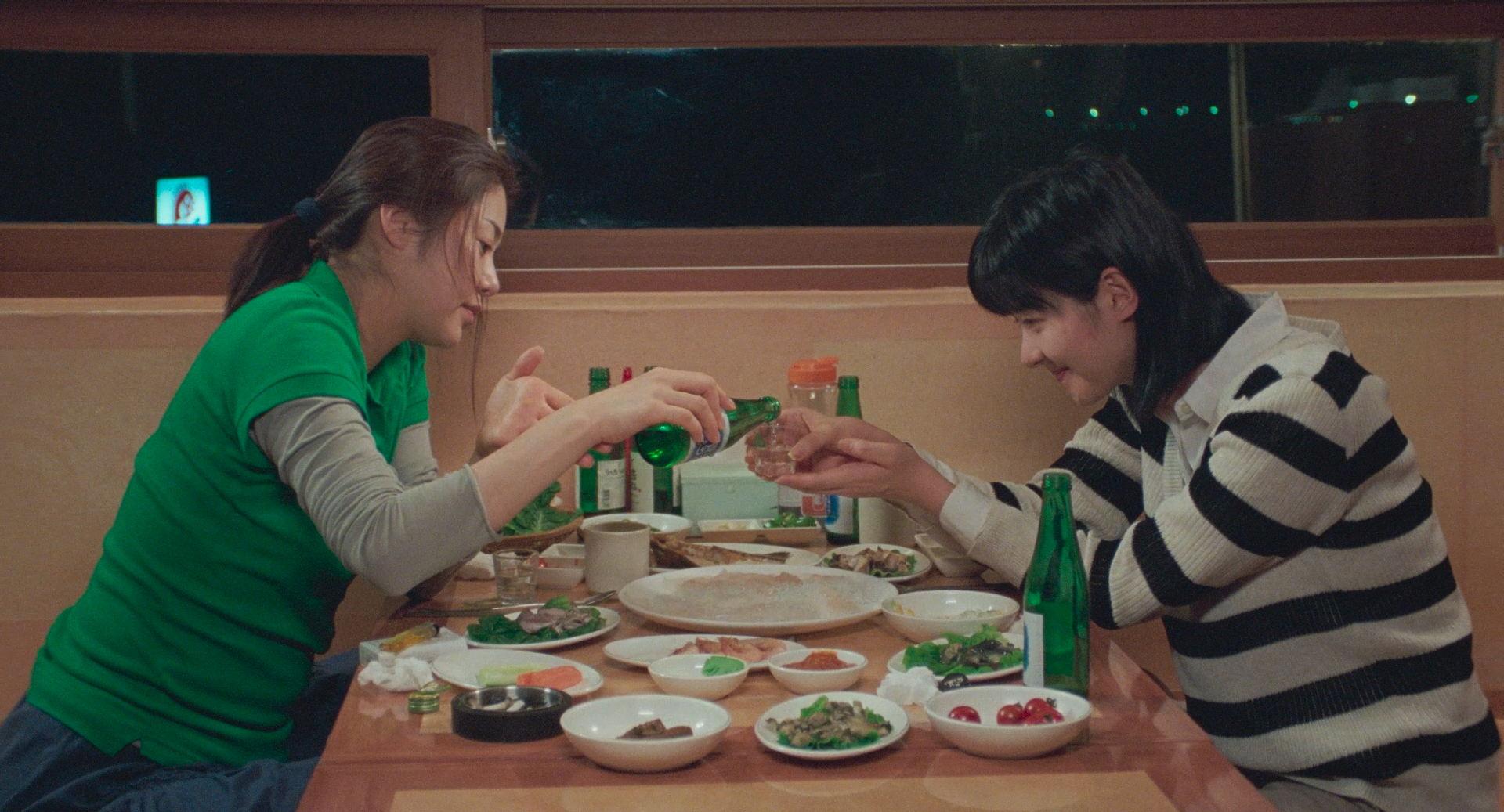 Woman on the Beach is something of a transitional film for Hong, if not quite as strong a break as On the Occasion of Remembering the Turning Gate or Tale of Cinema was with its evolutions. For one, this is the first film of his without nudity or on-screen sex, which I believe has held for the rest of his career; this makes a bigger difference than one might think, as that graphic, often mortifying release often took something away from the moments of intimacy. This also might be the first film produced (co-produced in this case) by his production company Jeonwonsa, though a Korean website says that Tale of Cinema was the first. And most crucially, this is arguably the first Hong where a woman’s perspective forms the majority of the runtime, depending on how one views the character dynamics throughout the film.

For my own part, Woman on the Beach seems to function in three parts, though this is somewhat hampered by the lack of the hilariously blunt, Rohmeresque “two days later” title card that precedes Jung-rae and Mun-suk’s second visit to Shindori Beach. Jung-rae is clearly the main character during his dalliance with Sun-hee — it’s a surprise that Kim Seung-woo hasn’t been in another Hong, given how well he nails the writer-director self-absorption that comes to dominate his scenes — but the rest of the film is more free-floating in its perspective.

This ambiguity stems equally from the greater prominence both Mun-suk and Sun-hee are given — the drinking scene that they have alone together is genuinely a breath of fresh air given the films that have come before — and from, it must be said, the title, which may be a Renoir reference though I’m not sure. Initially, it might seem like Mun-suk is another projection, something which is heightened by the vague resemblance Sun-hee has to her and Jung-rae’s infatuation. But little moments of performance from the very beginning, coupled with Chang-wook’s virtual disappearance from the film — amusingly, Kim Tae-woo plays more or less the same role as he did in Woman Is the Future of Man, albeit on a drastically accelerated timescale — set the stage for both her solo drinking scene and the final third.

This is also the first Hong film constructed explicitly along triangles, which almost beg to be analogized. Jung-rae-Mun-suk-Chang-wook has its Hongian repetition in Jung-rae-Sun-hee-Sun-hee’s friend, but it’s murkier between Jung-rae, Mun-suk, and Sun-hee, especially in deciding who departs in the best condition. Likewise, it’s tempting if almost cruel to see Chang-wook and Sun-hee’s friend as the dog Dori, who gets abandoned, though he gets to grow up in a better place/environment, which may well be the case for them as well once extricated from this romantic entanglement.

The triangles themselves get their perfect mirror in the diagram that Jung-rae draws for Mun-suk, one of the greatest and funniest scenes that Hong’s ever done. It oddly comes very close to the drawing that Hong once did for an interview with Sabzian, but where he found “infinite worlds possible,” Jung-rae finds the impossibility of perceiving reality. Obviously, this entire scene is meant as something of parody, in both his convoluted explanations to wave away the true accusations of infidelity and in Mun-suk’s awed reaction, as is also the case with his vaguely Hongian script idea for About Miracles. Indeed, Mun-suk’s observation that Jung-rae’s abrasiveness is “nothing like his films,” in addition to inverting the line from Tale of Cinema, certainly strikes the viewer even without a sense of what his produced films are like. But I still feel like there’s a great deal to be mined from their absurdities, a conflation of the search for connections with the self-absorption of men; that it’s counterbalanced by a growing drive for Hong to evoke his female characters’ inner lives forms much of the engine.

That engine, for better and worse, sometimes gives way to more languid moments; this is Hong’s most dedicated vacation film yet — The Power of Kangwon Province contains numerous stretches in Seoul, and On the Occasion of Remembering the Turning Gate is at least half the journey home — and really also his most structurally/narratively simple — though Jung-rae says he is going to finish his script, that aspect is covered in a laughably short amount of screentime and two handwritten pages. That quality appeals to me especially in the little moments where it does diverge from conversation: the moment where Jung-rae comes across and bows to the three bare trees is echoed in On the Beach at Night Alone and In Another Country, if I’m not mistaken. And the cruel joke Mun-suk plays on Chang-wook by leading him away from them on the beach is hilarious.

The first mention of a character living in Germany, which appears to be an odd obsession of Hong’s even though he hadn’t been featured in Berlin at this moment, comes here as well courtesy of Mun-suk. Hong’s cinema has to this point been very contained to South Korea, but beginning here there’s something of a more cosmopolitan edge that comes to an early head with this film’s follow-up. The distinctly xenophobic views of Jung-rae are certainly extreme, but they plug into the Korean values that are discussed throughout; both Mun-suk and Sun-hee are described as tall, an appellation which feels like a backhanded compliment in context.

While this is Hong’s second longest film to date, this alternates between slackness and a certain tightness, especially when it comes to some of the still-settling editing patterns and the music (which retains the past two films’ variety of cues and use over a few scenes of dialogue). In the first dialogue sequence, there’s essentially a reverse-cut to Chang-wook during Jung-rae’s first conversation, and an insert shot of the cherry blossoms that Mun-suk is admiring before the full long shot. It’s also interesting that there are so many more zoom-ins than zoom-outs here, presumably partially a result of often opening on long landscape shots before zooming-in to the characters, though the static extended shots of nighttime seduction on the beach are marvelous.

While there are only two scenes inside cars, I decided to add on two more scenes to my tally because they have such a strange quality, and demonstrate well both the strengths and minor weaknesses of Woman on the Beach. The first is the motorcycle harassment by the disgruntled waiter, which Sun-hee impressively staves off. On the one hand, it demonstrates what’s a rare and slightly ill-fitting decision to more conventionally resolve the conflicts here; in the span of a single shot Mun-suk has a slight resolution of her relationship with Jung-rae and patches things up with Sun-hee. Though the latter moment is lovely, it feels a little too neat for Hong, especially considering the films preceding and following this. On the other, it helps reveal and complicate more of Sun-hee’s personality, first hinted at in her assertion that she’s as honest as she allows herself to be, a cagy revelation that feels apropos to many of Hong’s female protagonists going forward.

The other is the final scene of Mun-suk’s drive onto the beach, where she gets stuck and is helped out by two men whose own car is mired in the sand. For one, it introduces a unique, almost Bazinian spectacle of watching people actually struggling and succeeding to extricate a car that Hong seldom delves to. For the other, its placement at the end appears to analogize the film in miniature: Mun-suk gets herself trapped in this tricky situation and is extricated by the action of men. But whether it’s true freedom or not is left unresolved; she merely drives down the beach. Whether she gets stuck again while trying to cross the border to get free is left open; what matters is her enjoyment in the moment.