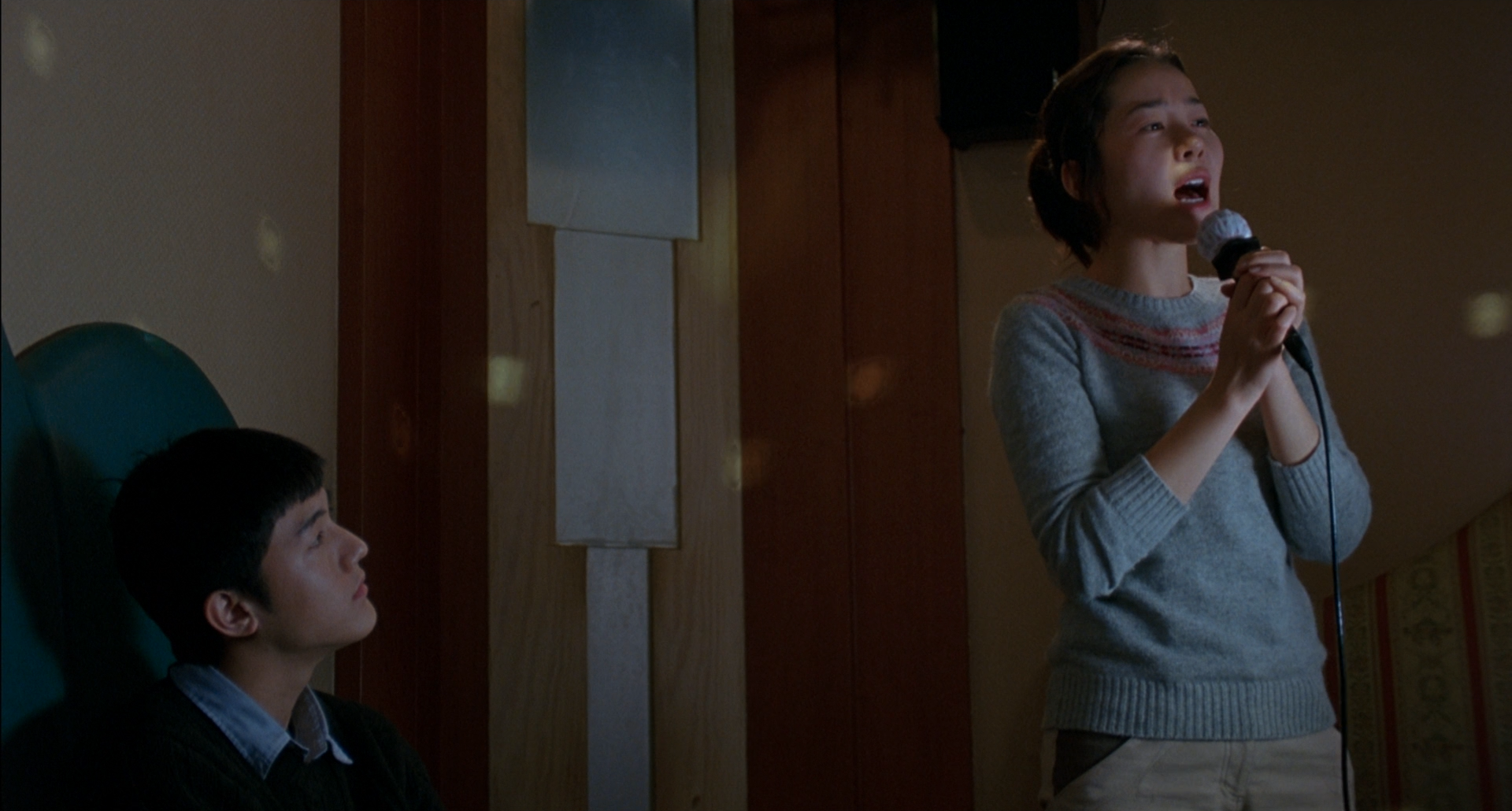 More than any other film, Tale of Cinema — one of my favorite early Hongs — is where it feels like Hong finally caught up to the retroactive stereotype of his work. While past films have featured actors and directors, their work was never strictly the center of their relationships; though we don’t get any film festival Q&As, hearing characters finally actually discuss a retrospective and their films is almost startling. This is also the first time that Hong broke from his two-year release pattern, inaugurating a level of productivity almost unheard of in 21st century filmmaking; the first Hong to contain a definitive film-within-the-film; the first Hong with voiceover; and maybe most notably of all, the first Hong to use zooms.

And use them he does: there’s almost as many zooms in the film as there are shots, though it should be noted that this has a marked increase in number of shots from Woman Is the Future of Man after a steady declining trend. This begins in the opening shot, the first appearance of his regular habit of zooming out from a distant landmark to reveal a street, then zooming in to the protagonist, Sang-won in this half of the film; or, slightly less than half; as Young-shil mentions later, it is a short film, and we literally see barely over 39 minutes in the actual film.

Hong uses zooms in an almost liberated manner, consciously playing around with what he can do, in the process discovering certain hallmarks: beginning on a plate of food or sleeping pills before zooming out; zooming in, panning, then zooming out during a tense discussion. There’s one gleefully unorthodox moment in particular when Dong-soo is leaving the hotel and the camera zooms out from the stairs, pans and zooms into a woman wearing a similar shade as Young-shil, then quickly zooms out again as Dong-soo walks into the background. I also totally forgot about the dream sequence with the White woman who speaks perfect Korean and offers Sang-won an apple, one of the most delirious Hong dreams.

I loved the film even more this time — in the past it was the only Hong pre-2008 that I loved on the level of his second-tier work — but I can definitely see how the insistence on the conceit, the highlighting of the parallels between fiction and reality might be a little too on-the-nose; in its own way it’s making a statement as open as Goodbye, Dragon Inn two years earlier. But I had completely forgotten how this swings in a wider emotional arc than any Hong before. It certainly helps that this brings the Hongian crying scene, typically a wail of anguish not far removed from the drunken shouting that appeared plenty before, into greater prominence. But the nature of both parts, involving attempted double suicide in the first part and an unspecified grievous illness in the latter, casts something of a pall over many of the proceedings.

Of course, there’s something deeply absurd, if also sobering, about Dong-soo’s revelation that the film was based on his own personal experience even as he falls into the same cycle, and how he walks conspicuously behind Young-shil during many moments in the second half. In a sense, Kim Sang-kyung has distinguished himself from the other past Hong protagonists in his relative sense of purpose; in the second half of both films he’s starred in, he pursues a woman with renewed resolve, in a manner reflective of the first. But, like On the Occasion of Remembering the Turning Gate, the first and second halves don’t fit together: the first half almost represents an idealization, replete with numerous varieties of music cues (if still more restrained/less on-the-nose than most of Woman Is the Future of Man‘s) and a neat family dynamic. While Hong doesn’t abandon his embedded style by any means, it is still as if he streamlined his progression to a point not seen in his films at large until later, compressing the action so as to let the second half unravel the taut narrative. The greater of number of shots does help, but a few editing choices in the second half feel atypical: two cuts within the same scene that advance the time forward a little bit, and an extraordinary match cut of Dong-soo smoking in front of the restaurant to him smoking in front of the hospital.

I’m also reminded in the last part of what Hamaguchi said about the coda of Drive My Car, choosing to make it “imperfect.” Young-shil’s “you didn’t understand the film” kiss-off — which blessedly remains unexplained, free for interpretation — is as choice a line as Hong’s ever had, but his actual place of ending is much more knotty. First, there is an unresolved conclusion with Young-shil like the kind Hong was fond of in his early period; then there is a shockingly anguished scene with Sang-won; then, to close, the first instance of voiceover in the second half, which was so prevalent and even ran over scenes in the first half. While the first half’s use could be attributed to that difference in style between Hong and Sang-won’s sensibilities, the second reaches back into the fictive, to show the remaining union of mindset between Dong-soo and his fictional portrayal. Dong-soo’s quotation that he’s “too fond of drinking” and that “life is too tough” reverberates across both parts, if not Hong in general.

The presentation of the play-within-the-film, which preserves the proscenium and has the amusingly direct title of “The Mother” — we never get a title for Dong-soo’s short — of course links up with the mother-son dynamic that bleeds through his anguish. But it also points to both the return to young adult protagonists, previously only seen in the first half of The Power of Kangwon Province, and the stomach pains and vomiting that recur.

Going back to understanding the film, and with the knowledge that others — including Dennis Lim, whose monograph I’m looking forward to even more than before — may view it differently, I see Young-shil as acting as an even more overt reflection of whatever each man wants to see her as, which of course dovetails with her acting. This is far from the only Hong to make this idea its subject, but it has an even greater charge here, in large part because there’s so much performance coursing throughout this; the two karaoke performances of each song, the really strong work put into deaging(?) the actors — this is the first Hong where all lead actors return at least once — and most tantalizing the possibility that Young-shil’s counterpart didn’t want to die by suicide at all. Instead of confronting the fact that the actress persona and the ex-girlfriend role both don’t map onto Young-shil’s actual being, Sang-won gets trapped in cycles of illness, and Dong-soo retreats into looking at his habits again: he merely thinks about maybe stopping those Marlboro reds which he sees as a mirror instead of a coincidence, that fate that draws Hong’s interest more and more.