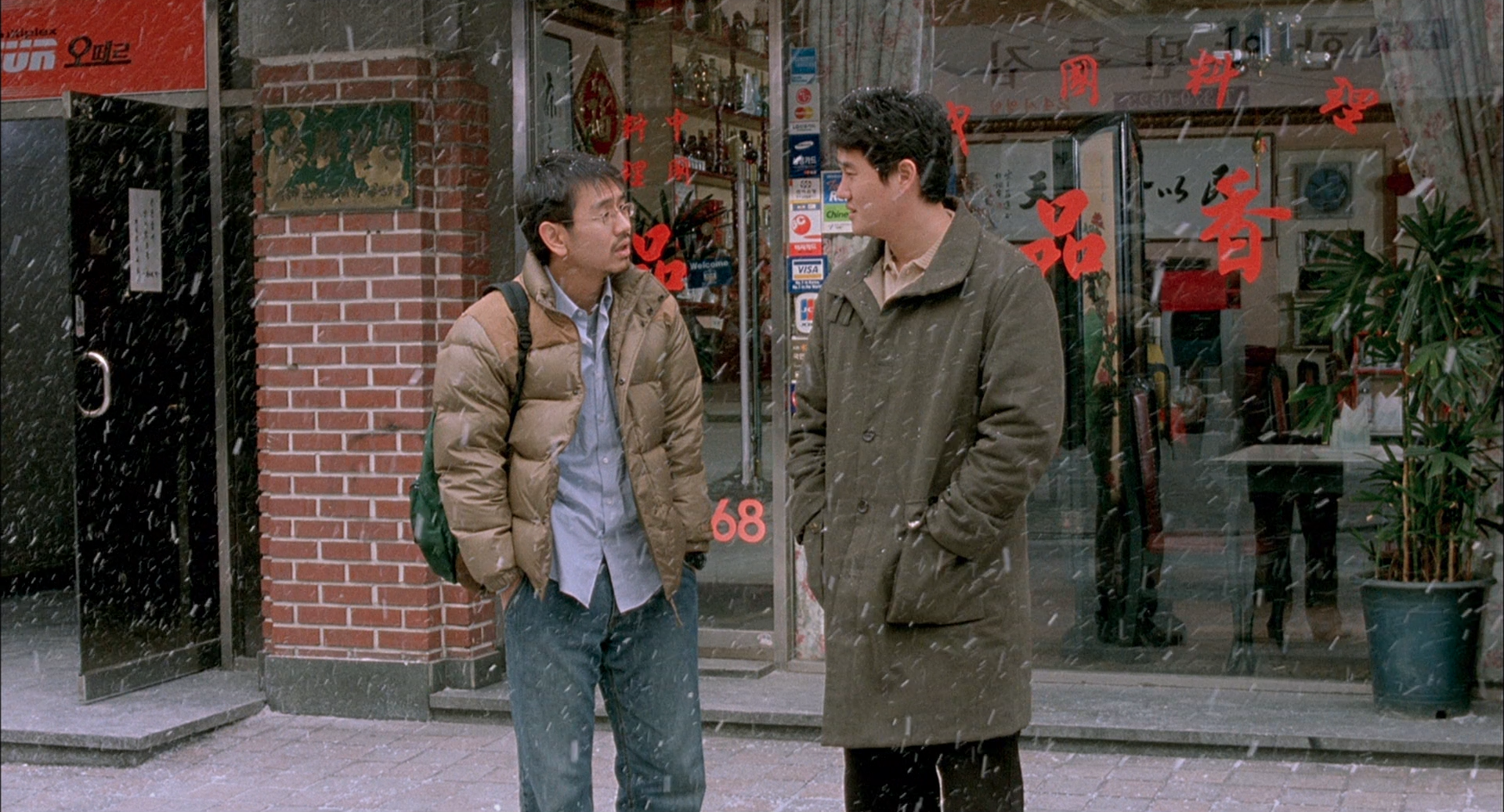 If there was a Hong that I dreaded returning to in this project, it was probably Woman Is the Future of Man, which I remembered being the nastiest and bleakest of his films, even in the early period, and my least favorite of the films in the style that’s already become fairly entrenched. I feel like I might have been too hard on it in my mind, though on the whole my opinion hasn’t changed — which says much more about my love for Hong’s work generally than this film itself. It’s also fascinating because of the quietly significant place it holds in his work: his first with foreign funding courtesy of mk2 films; his first film in Cannes Competition, where like every subsequent appearance it received no jury prize whatsoever; and most importantly his first film under 90 minutes, rather than merely two hours. It also tends to be divisive; I belong to the camp that deems it decidedly lesser Hong, but it seems to crop up often as a favorite, I distinctly remember Isabelle Huppert really loves it.

I actually found myself liking what appears to be the central storyline a lot more this time, and in particular the destabilizing unmarked flashbacks triggered by a Proustian madeleine of a woman with a purple scarf, who doesn’t appear to come back later in the film, but instead remains a symbol of attraction, which characterizes Seon-hwa’s role in the film to a certain extent. (Note: this is the first of perhaps a few Hongs with a title inspired by a poem, here by Louis Aragon.) While the off-screen rape (something that Hong introduces at least one more time) still intrudes on the worlds of his films a bit much for my taste, the obsessive cleaning and the idea of sex as cleansing hit the right note of self-absorption, and it’s amusingly odd to see Hong filming a bustling airport and a wedding, even outside the church. It’s also fascinating to see a relatively compact film, charting two days of drinking, incorporate two separate seasons with chronological jumps within each flashback.

Where the film runs into some atypical trouble, aside from the more confrontational nature of the interactions that hearkens back more to Virgin Stripped Bare by Her Bachelors than anything else, is in the final third. The slow transition of “main” protagonist from Hyeon-gon — a regular early Hong lead in his first appearance — to Mun-ho — who doesn’t appear again in Hong but was a regular for Park Chan-wook and played the main villain in Oldboy in the same Cannes Competition — isn’t necessarily the problem, even though it happens by Seon-hwa swapping sexual partners, but introducing the professor-student dynamic throws things off balance. It’s interesting to think of Kyung-hee and Min-soo as analogues for Seon-hwa and Kyung-hee, respectively, and the doubling with a more active rival male is neatly highlighted by the second blowjob, but it feels a bit rushed, shunted into the last thirty minutes and interfering with the contained nature of what came beforehand.

This is the first of numerous appearances of a Chinese restaurant in Hong’s films, a recurring interest that fascinates me, as does the first appearance here of a fried chicken bar. I believe they’re drinking baijiu but I could be mistaken, and it also features some dialogue between the owner and the waitress of Mandarin, spoken quietly but which sounds all correct to me. Also of note: a mention of Kangwon Province.

This might actually be the Hong that uses the most music, with at least three separate tracks which provide not the punctuation that normally characterizes his films, but instead a transitional nature that almost seems to reflect the emotions of each scene in a much more conventional manner than usual. There’s also a nice restive quality to some moments, especially the one where Hyeong-gon and the neighbor dance behind the balcony door to music that sounds like something out of Julee Cruise and the man selling rice cakes in the distance.