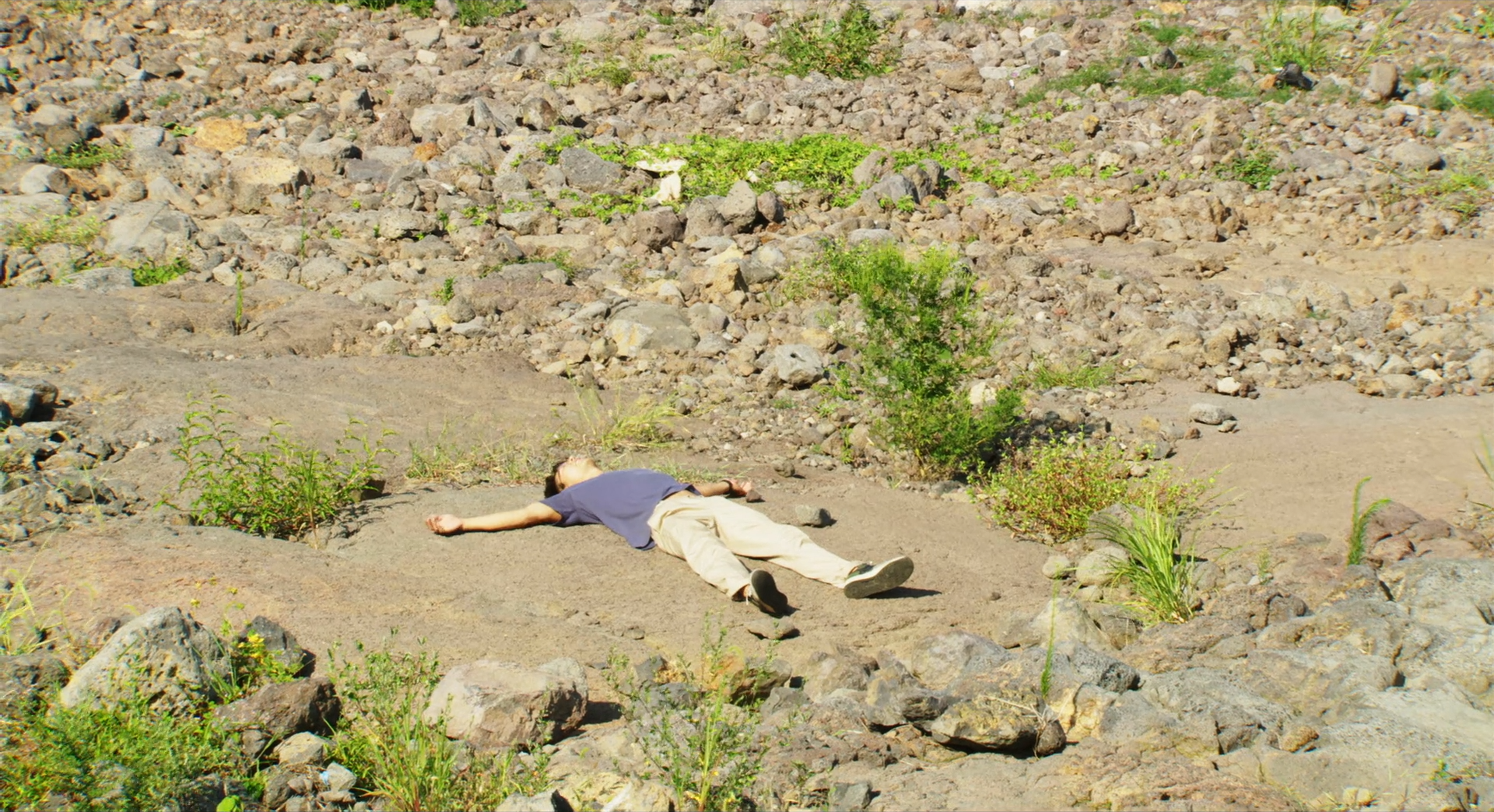 The great and difficult thing about Hong, or at least many of his admirers’ relationships with him (including myself), is how even great films that would be towards the top of many other directors’ filmographies are *merely* very strong; it was especially the case in my first run-through of his work from 2016-2019 that I would form notions about his films, or perhaps judge them too hastily based on the experience I’ve had with his other works. Probably no film suffered as much as Like You Know It All, which had almost grown into my mind as his The Wayward Cloud (which I still haven’t rewatched), an uncharacteristically nasty film — by this point in his career — that I nevertheless found quite fun to watch. The film is acidic in its own way, but its virtues have grown considerably for me — many consider this to be among Hong’s funniest films, I didn’t agree until this watch — and the weaknesses more integrated into an overall coherent statement.

First, Like You Know It All is his most engagement with the film world yet, with the first third taking place at the Jecheon International Music & Film Festival — running from August 14-19, with the Jecheon Summmer 2008 setting laid out in a streamlined version to the opening title cards in Night and Day — and the second two-thirds set at and around a film school on Jeju Island. He finally shoots inside a movie theater itself, with two priceless depictions of film festival jurors (including Kyeong-nam) falling asleep; makes multiple mentions of DVD screeners including the totally plausible idea that Kyeong-nam wouldn’t own a copy of his own film; and finally includes the first of his hilariously contentious Q&A sequences, though this one only shows one question and takes place in a classroom setting. It’s also so strange to see a White person so initially prominent; I don’t think Michael Wayne Rodgers, who plays Robert, is/was an actual film critic, but he’s hilarious in this. Kyeong-nam’s rootlessness about his lack of financial success despite his renown is incredibly funny. I have to think Hong is speaking at least a little through him where he talks about his creative process as involving “no preconceived ideas,” where he discovers and gathers pieces that he thinks are precious, often from his own life, though I don’t believe he thinks of himself as a philosopher, or that he would consider his films to have “no beautiful images” whatsoever.

Like You Know It All also marks the start of a phase of Hong career that stretched through 2014, which isn’t necessarily related to artistry but rather reputation. Of course, I wasn’t remotely aware of the festival circuit at this time, but it’s very notable that this is the first Hong that wasn’t selected for the New York Film Festival since he was first chosen with On the Occasion of Remembering the Turning Gate. Richard Brody pointed specifically to Manohla Dargis’s scathing New York Times NYFF review of Night and Day as potentially swaying the selection committee, and since this was an era where the NYT did have a great sway over NYFF programming I’m inclined to believe him. This touched off a fraught period of years of distribution for Hong’s films, where it was seemingly arbitrary whether his films would get distribution or even get into NYFF; I wouldn’t put it on this film at all of course, even if it does paint a biting portrait of the film festival world, but it is a noticeable trend.

But, as much as this is a film about the film festival world, I completely failed to notice when I first watched — partly because I was hopping back and forth between early and late Hong chronologically, as per Evan Morgan’s suggestion — that Like You Know It All is perhaps Hong’s most sustained character study yet, which is odd because it’s also probably his most purely Kafkaesque film. Every other film relies more on multiple protagonists and/or structure (even On the Occasion of Remembering the Turning Gate, where Kyung-soo is more of an avatar); it could be argued that Soon eventually assumes a similar status as Yoo-jeong from Night and Day, but, despite her substantial dimensionality, she’s featured slightly less.

Kyeong-nam, however, remains front and center throughout all of Like You Know It All; the title is even spoken aloud by Soon, and every situation involves, to one degree or another, an intensely surreal and out-of-control situation coupled with his insensitivity and inability to, as Soon says, take things as they are, to be content with what’s in front of his face. It really is absurd how many people he totally alienates or harms, and the means by which Hong carries this out call back to the extremity of his earliest films: the dreamed death of Sang-yong, carried out so long that it’s only in the last few moments that it registers as unreal; Hyeon-hee’s off-screen rape, which is as unpleasant as the one in Woman Is the Future of Man, perhaps too much so, though she is given more space to speak than in that film; Sang-yong’s attack of Kyeong-nam; the neighbors that catch Kyeong-nam and Soon in flagrante delicto and threaten him with grass cutters.

Each of these comes without warning, things suddenly sprung upon Kyeong-nam; even though he is the main character (in his last of three appearances for Hong), he almost seems to be playing the side characters that disappeared in Woman Is the Future of Man and Woman on the Beach, made into a disgruntled observer that is at the mercy of capricious people and fates, even as he unconsciously does his best to worsen his position. The sequence with him on the riverbed and running out to sea, weirdly reminiscent of The 400 Blows, is a thrilling and necessary respite, and it’s so wickedly funny how he initially seems to find love with Soon, only to find that he’s completely misunderstood the situation.

Hong really goes wild with the zooms here; there are very nearly the same amount of zoom ins alone compared to shots, and they’re generally used here to heighten the tension of the scene or intently focus on faces to a greater degree than before. Part of the reason is the picturesque, summery settings; I think this is the first Hong film that takes place entirely outside of Seoul, though I could be mistaken, and he freely shows off the pretty skies and beaches before zooming back to the characters. There are also some longer takes and pans to follow characters as they traipse through the landscape; the shot where Kyeong-nam looks across the hotel balcony to see Hyeon-hee being comforted genuinely gets across the unexpected voyeurism.

This is also a slow-boil approach to doubling that Hong hasn’t quite opted for before; partially due to the longer runtime of the second two-thirds, Cheon-soo and Soon don’t appear for quite a while, and initially their closer ties to Kyeong-nam would seem to obscure their parallels with Sang-yong and Shin. But it’s fascinating how Hong shuffles little things around, like Kyeong-nam’s confessions of his admiration for Jin-sook and Kyeong-nam while drinking, and unnerving duplicated objects like the rock, which make the final third Kyeong-nam’s alternate take on and failure to totally avoid the traps of the first third, though he does get free of the school drama.

Like You Know It All is probably Hong’s most metatextual use of actors yet, while also introducing a shocking number of his most valuable repertory players in small parts, like in Night and Day. Kim Tae-woo as Kyeong-nam has already been covered. Sang-yong is played by Uhm Ji-won, the actress in Tale of Cinema, who has a similar total rejection of the main character, though she has a much smaller role. Soon is played by Go Hyun-jung, the Woman on the Beach, who also is afforded a certain freedom (in both promiscuity and lack of restrictive bonds) and is last seen leaving a beach; she is the only one who reappears in a Hong film, albeit only for a cameo. By contrast, Jung Yu-mi, Yoo Jun-sang, and Seo Young-hwa all make their first appearances. Already, their personas seem partially set. Jung is open and talks freely — the invocations of Jesus here have the same feeling of vague absurdity as in Night and Day, though it’s ambiguous what exactly Kyeong-nam did besides calling her not an angel. Yoo is a great blusterer, initially presenting a gregarious veneer but frequently veering off into domineering behavior. Even in a small part (she’s never led a Hong film), Seo has that same beatific quality as later on; Kyeong-nam calls her his favorite actor, and there’s an appropriate distance that’s maintained, she steers clear of most of the drama and exits the hotel room before the amazing drinking contest between Hyeon-hee and Jeong-hee — hilariously described in contemptuous voiceover as a porn actress who appeared in a “bogus art film” — begins.

Arm wrestling returns once again from Night and Day; it really is odd how well the protagonists do against the younger men, beating them soundly, and Hong apparently believes that men get better at arm wrestling the older they are. Even though Cheon-soo is a painter (a local hero) and Seong-nam mentions that his arm is incredibly strong from the continued exertion of painting, he doesn’t actually arm wrestle, and the man Kyeong-nam loses to is basically only present in two scenes, almost a personification of the mysterious forces that swirl around him.

That mystery is what compelled me anew about Like You Know It All, the continued emphasis on identity, the most important things in life, and the necessity to know one’s own self and desires. It’s implicitly what drives Kyeong-nam through these odd encounters, along with his desire to just get his duties over with — despite the beautiful settings and pronounced hangout feeling, neither trip is a vacation. But he is continually stymied by his inability to understand people or read situations, all of which respond to him in kind and lead him drifting; even if this does run a bit long, Hong’s drift is so pleasurable to experience.