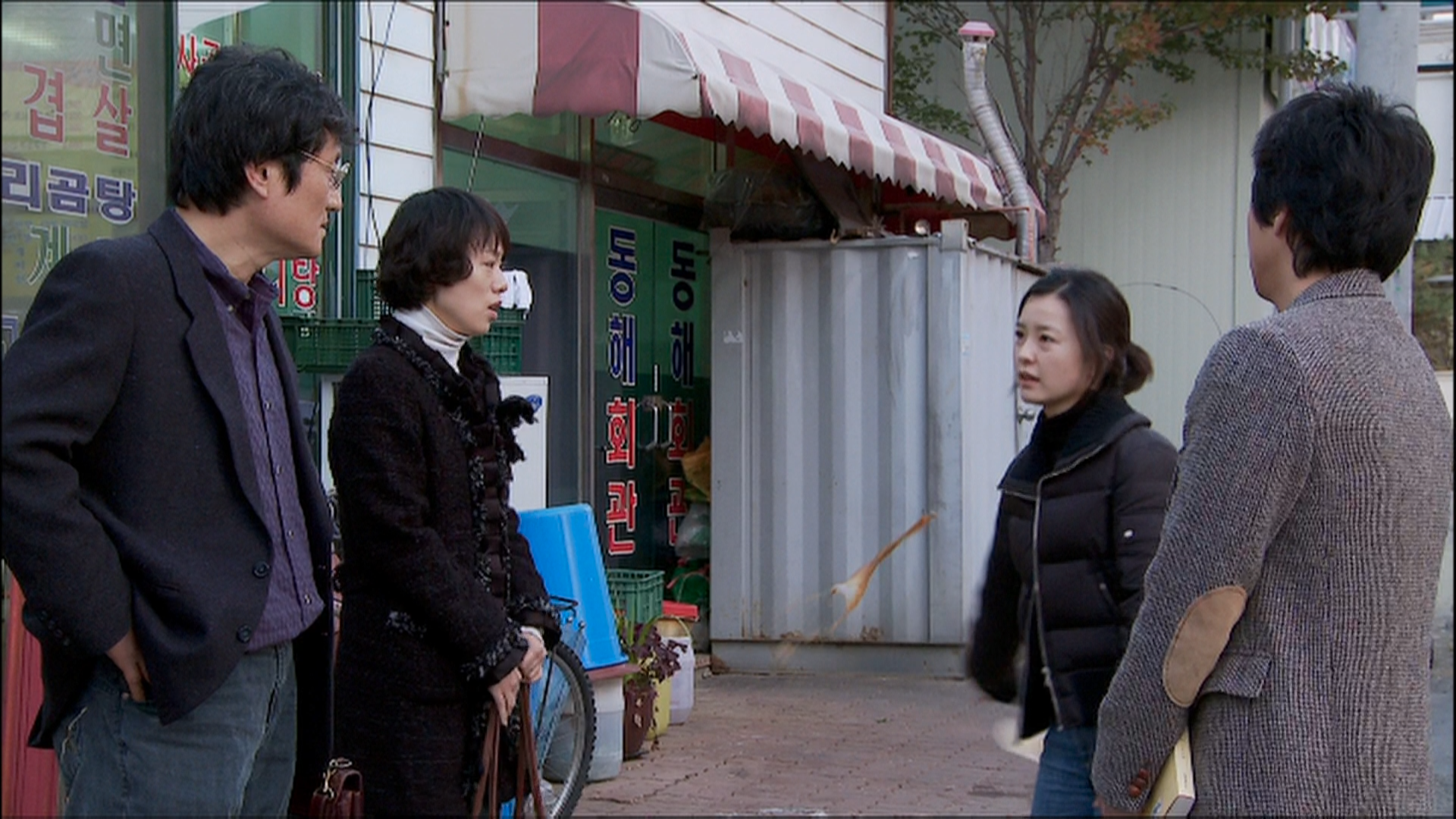 I’m finally getting into the phase of Hong’s work where I’ve seen the films multiple times, his style is becoming even more familiar, and it’s even harder than before for me to be anywhere close to objective and not get caught up in the intensely humorous sweep of his films. “Lost in the Mountains,” as Hong’s first short, presents an especially interesting case study in my history with Hong. When I first started getting into Hong, even though I mostly started with the shorter work I felt that a certain duration was essential to his comedy, lengthening out the possibilities of each scene, and so I had a hard time believing that it would translate well to a short. I always viewed “Lost in the Mountains” as basically a compression, smushing the action of one of his normal films into half an hour; ironically I wrote my first and one of my only full-length pieces on it with this idea in mind. But I loved it to a much greater degree on this third watch; maybe I’ve just fallen even more for Hong’s style, or maybe “Lost in the Mountains” has an intent and importance in Hong’s evolution all its own.

As with everything Hong, both due to his productivity and the generative force rewatches provide, analyses are always shifting. Case in point: I just mentioned Sean Gilman’s three-period thesis yesterday, but he issued a new division today: The Day a Pig Fell Into the Well to Like You Know It All, “Lost in the Mountains” to Claire’s Camera, The Day After to the present, with the former two presaged by the last part of Woman on the Beach and Right Now, Wrong Then respectively. That makes sense to me, and it’s especially fascinating that the dividing films both come in multi-film years for Hong. I’ll obviously get into this as we go on, but taking “Lost in the Mountains” specifically as the first film of the middle Hong period makes this short much more significant than it initially appears.

Produced as part of the omnibus film Visitors, which was the 2009 iteration of the Jeonju Digital Project, an initiative by the Jeonju International Film Festival to fund three directors’ short films — Hong’s compatriots were Lav Diaz and Kawase Naomi — “Lost in the Mountains” feels as essential as any of his features. While it appears to be shot on standard-definition video, if it isn’t merely an old transfer — this is one of two Hong films that doesn’t have a strong HD release — it both fits in and breaks from Hong’s previously established aesthetic. The opening and closing are especially notable: quick cuts between tall buildings — apartments in Seoul, motels in the mountains of Jeonju — which recall, of all things, Alain Resnais’s epochal Muriel, or the Time of Return; Richard Brody has compared Hong to Resnais, which I don’t feel nearly as strongly as Rivette or Rohmer though it’s worth considering. Aside from establishing a link between the two cities, it also acts as a kind of reminder of the odd oppressiveness of the city that Mi-sook can’t escape from.

“Lost in the Mountains” isn’t really an oppressive film though. Like You Know It All was a perfect send-off to Hong’s early period; while extremely funny, it definitely represented a certain apotheosis of the relatively straightforward skewering of Korean men. Now, the Jung Yu-mi era has arrived, a collection of films nearly as significant to Hong as his initial run of Kim Min-hee films. The main trio of Jung Yu-mi, Moon Sung-keun — looking a good deal older nine years after Virgin Stripped Bare by Her Bachelors — and Lee Sun-kyun recurs again in Oki’s Movie, and Lee establishes himself during this period as just as vital as Jung. The other two key actors in the short, Kim Jin-kyoung (edit: she appears again in Oki’s Movie) and Eun Hee-kyung, on the other hand, appear to have only acted this one time, though their presences are very game.

But while it breaks from her perspective a few times and the roundelay of people is a treat, “Lost in the Mountains” belongs to Jung, as forcefully as any male Hong protagonist thus far. Hers is the first female voiceover, which narrates action more directly than in his features, likely for runtime reasons; even post-nudity Hong would have probably shown some of the “weird stuff” that Mi-sook and Jeon attempt in the motel. She is also given some exquisite moments of sheer abandon which only his men possessed before (save perhaps Mun-suk in Woman on the Beach, this period’s precursor): her assertion that she’ll sleep with every man before she dies, her request for Myung-woo to kiss her and subsequent mortifying make-out session at the same table as Jin-young, and most of all her fed-up tossing of the coffee cup, one of my very favorite Hong moments.

There is also a greater sense of purpose amid the hopelessness that Mi-sook feels, which is amped up to a degree that registers more fervently as comedy than it did for Hong in the past. Her quest to become a strong writer is articulated more clearly than, say, Kyeong-nam’s search for his identity in Like You Know It All or even Jung-rae’s attempt to write his script in Woman on the Beach; even though her visit to Jeonju is impromptu (it’s so amusing how she asserts her lack of fear of driving), she tries to make the step of going to the writer’s house; that she so quickly crumples after the writer remembers seeing her with Jeon yesterday heightens the scenario all the more. I don’t remember if this same drive is articulated all throughout this middle period, but it’s definitely a shift.

What really shifted for me on this watch of “Lost in the Mountains,” besides the greater hilarity I found, is how tightly constructed it is without feeling plotty; it feels truly driven by Mi-sook’s impulses, breaking away from the group when it gets unbearable. The set of three phone calls that each ex-student makes to Jeon is truly deft, and the quick agglomeration of all this detail etches out this particular culture as surely as in his stronger features.