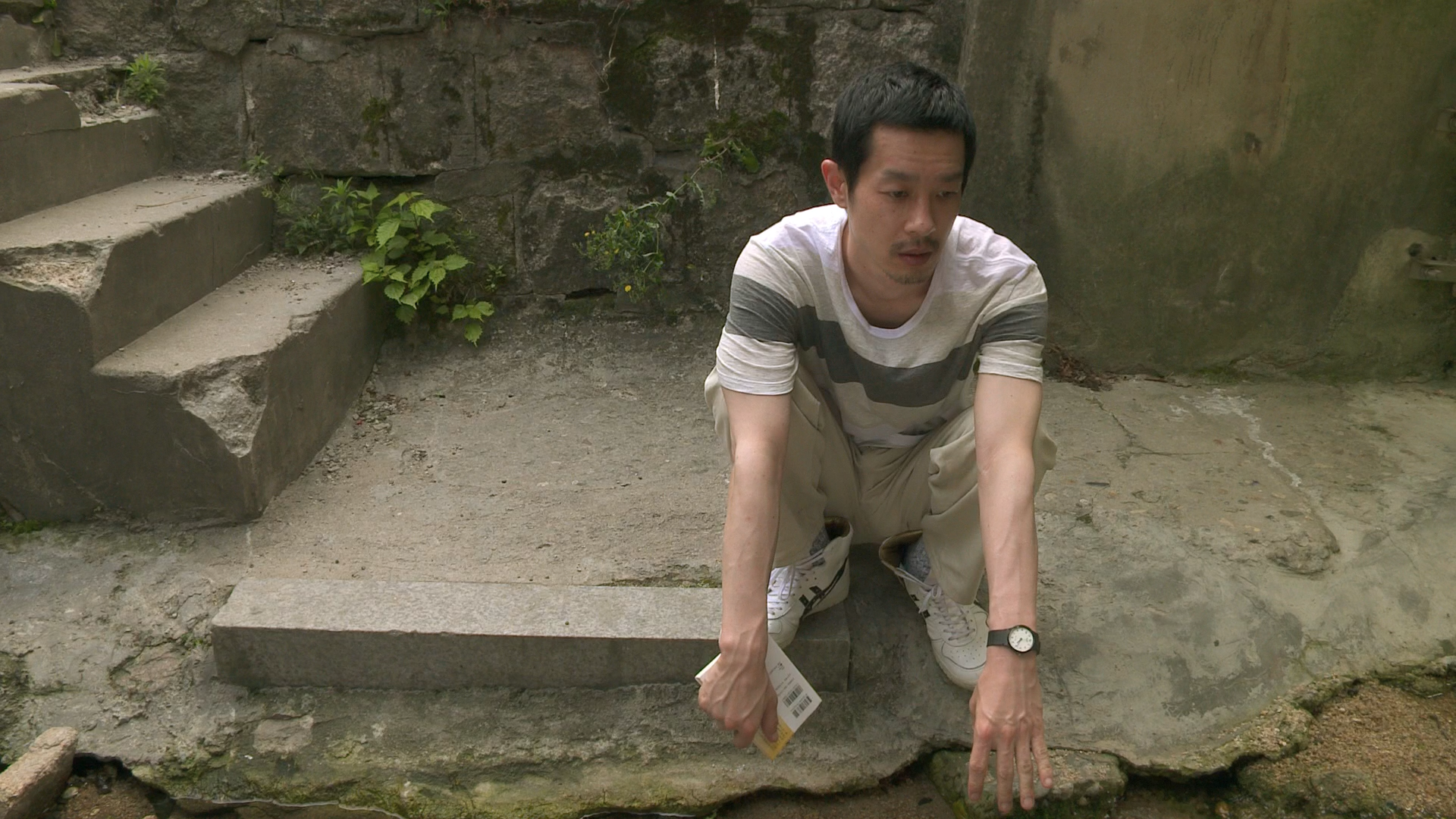 The first Hong feature that can properly be regarded as a mid-length film, Hill of Freedom, has always been a source of fascination for me. The first one I saw after that three-day stretch, and the first one I saw with Evan or indeed any other person, it’s in many ways the template for how people who came to Hong during his late period (like myself) think of his films: a clear yet elliptical structure, a compact runtime, and a happier — or at least less damning — conclusion than the rejection of his male protagonists in his early period. All of this is true, and I already really loved it on my first two viewings. But having watched many more of his films now, I’ve come to appreciate even more how special it is, how speedy and light it is from construction on down while still leaving so much possibility floating around.

First of course, there’s the predominant use of English; In Another Country might edge Hill of Freedom out if only because it has twenty more minutes, but otherwise this is the Hong most dedicated to exploring the way people communicate in languages they aren’t very familiar with. Huppert has something of a command of English despite it being a second language, but all of the characters here speak haltingly — except for the White guy who runs the popular bar and also speaks Korean fluently; don’t know if he’s credited but his scene is hilarious all the same — and much of the comedy comes from this very hesitancy, the way it forces them to express themselves in plainer and more direct methods.

There’s also the foregrounding of Mori, played by Kase Ryō, who’s acted in no less than five of the most significant films of the last decade — this, Like Someone in Love, Silence, To the Ends of the Earth, The Works and Days (of Tayoko Shiojiri in the Shiotani Basin) — and has, almost like Huppert, a cinephile’s sense for working with brilliant filmmakers from around the world. His performance here, interestingly, doesn’t aim to foreground his Japanese ethnicity, and neither does Hong. Each time someone tries to talk in Korean to him, he says that he can’t speak Korean rather than say that he’s Japanese. Despite the conversation with Gu-ok — Youn Yuh-jung, running a guest house in almost a similar manner to her film-daughter Jung Yu-mi in In Another Country — about the differences between Koreans and Japanese (described as nice, polite, and clean) and the later observation that he almost seems more Korean than Japanese, this issue isn’t truly broached. His conversations rest more on regular small talk — the business or pleasure question never gets old — with his Japanese identity seeming to matter much less than his status as a vacationer, like other Hong outsider protagonists.

Where Mori does differ, especially from the likes of Lee Sun-kyun and Kim Sang-kyung’s roles, is his fundamental gentleness and self-aware pity, in a manner even greater than Yoo Jun-sang’s characters — the film, like the one solo-Yoo-led The Day He Arrives, takes place in Bukchon. He adopts almost a sort of lost fatalism, where he accepts even from the beginning that he’ll alright whether or not he is able to meet and reconnect with Kwon — Seo Young-hwa in her largest role in a Hong yet — and accepts things with a passivity. He isn’t able to, say, confront Kwang-hyun (Lee Min-woo in basically the same obnoxious role as Our Sunhi) about his overbearing behavior or make sense of the (much funnier to me now) arguments around him. This isn’t to say that he’s not capable of wide emotional swings like other Hong protagonists: he’s incredibly despondent under the influence of wine and may or may not have fought someone to protect a woman; his voiceover is especially strong in this manner, calling himself stupid for getting involved with Young-sun and the comedic edit from him resolving to lay out all the facts to him sleeping with her again. But the appropriate lasting image is of him stuck in Young-sun’s restroom, helplessly trapped but much calmer than other Hong characters would be.

I know a number of people who have talked about Hill of Freedom‘s structure as almost a puzzle to be solved, even speculating about a possible chronological edit that could be made of it, minus of course the letter that gets lost — I remembered the dissolve as Kwon collects the letters but not the rapidity of the whole scene, the sudden slump she has on the stairs and the quick zoom-in on that last piece of paper. While I wouldn’t go so far as to say that such thinking misses the point, I appreciated for the first time just how elegantly the film is structured. First, there’s the first letter of Mori checking in at the guesthouse and meeting Young-sun — Moon So-ri again — and her *adorable* dog Gumi — which appropriately means Dream, especially for such a light Hong — at The Hill of Freedom, which I had totally forgotten came before the letters are mixed-up. Then, there are two successive letters which clearly delineate a backwards progression of time and causation: Young-sun taking Mori out to dinner out of gratitude for finding Gumi, then Mori finding Gumi. This is then upended by the next letter, the first (and only onscreen) time Mori and Kwang-hyun meet, which could take place at any time before the preceding event, days or weeks; Mori says he’ll probably stay around two weeks, but it could certainly be much longer, since at least a week passes between his last letter and Kwon’s return.

What the achronology emphasized for me this time around — aside from neatly tying into the book that Mori keeps reading, Time, and how it’s merely a projection that we produce as our brains evolved, not unlike the differences between men and women — is just how much Hill of Freedom becomes a film about quotidian life, albeit delimited by Mori’s underlying mission to reconnect with Kwon and his pending return to Japan; the frequent interactions at the guest house and the café make the spaces even more familiar than the campuses in the Jung Yu-mi films or the restaurant in Hahaha, establishing a cozy sort of feeling to the film’s spaces. At the same time, there are so many jagged ends that, thanks to the achronological structure, go down much smoother than in a traditional narrative: the amazing dream, where someone is singing Mori’s name as he runs his hand through a stream; the wait at the bar for the beer that never comes; Mori’s line at the end of a letter that someone was lucky to go to the toilet; and of course the entire arc with Nam-hee.

This being the only Hong Jung Eun-chae has been in aside from Nobody’s Daughter Haewon, it’s very tempting to think of Nam-hee as more-or-less the same character; after all, her father was never seen in that film, and Haewon might have fled to escape her situation with Seong-joon. This might be saying too much — Gi Ju-bong, the sage-like figure who gave her makgeolli, is her dad here and brings her back remarkably calmly and without speaking a word of English to Mori — but there’s an odd sense of suspension to her scenes. This of course comes in her shouting match with Sang-won, which I found much funnier this time in its extremity, the one rancorous rupture in the otherwise lovely and light film, and which acts as the exact opposite of their interactions in Nobody’s Daughter Haewon; it’s mentioned that Sang-won came back from America recently, where Joong-won was a professor, and he has the same amazement at someone else’s cigarette strength compared to his 1 mg as in “50:50” — Mori smokes 8mg, while Moon So-ri smoked 6 mg. There’s also the appearance of Nam-hee’s possible lover Yeom-gu — Jeong Yong-jin, Hong’s regular composer during this time — and that time when Mori sees her in a shop, sans suitcase and seemingly much less troubled; it’s deliberately unclear whether this comes before or after her previous scene.

One of the greatest tricks that Hill of Freedom pulls, even more effortlessly than the rest of the film, is how Hong, maybe for the first time, creates two equally desirable romantic outcomes almost without even really trying. A lot of this comes down to perfect casting: Moon So-ri has been a Hong stalwart for the past few years, and her steady management of The Hill of Freedom and kind behavior towards Mori, along with the genuine intimacy of their conversations in bed together, while Seo Young-hwa has always maintained something of an ethereal presence in his films. Even when she’s reading the letters — this is the first feature since Virgin Stripped Bare by Her Bachelors to have more shots than there are minutes in the film, a direct result of the cutaways to Kwon moving on to another letter — she operates at a slight remove, almost as the constructor of the film structure, existing both inside and outside of the story in much the same way as Jung in In Another Country. Since I generally take the charmingly pathetic Mori at his word — he’s as prone to sleep as Haewon, though I don’t think he actually naps in the film, just sleeps for long periods of time — I believe him when he expresses his great respect for her, which comes through both as his projection and in the wise face that Seo always brings to Hong.

Thus, it’s only fitting that Hill of Freedom has two endings, one absurdly conclusive with the now recovered Kwon and one typically open-ended with Young-sun; I adore both but prefer the grace the first allows for. The first then offers the possibility that the last scene is some other liaison with Young-sun, or perhaps actually the missing letter; I had thought before that it was the fight Mori gets into, but I’m fairly certain it happened after the final letter was left at the language institute since his wound (again on the left side of his face as in Like You Know It All and Nobody’s Daughter Haewon) is still somewhat fresh and Sang-won and Gu-ok took him out to dinner in gratitude. I’m not exactly sure where it would be then, maybe even after the first post-jumble letter when they’re drinking wine, but it makes the dream less clear-cut than might reasonably be assumed.

The other, probably more common interpretation is that Mori dreamed this first ending where he starts a family with two children in Japan, which then begs the question of exactly how much was a dream: did Kwon actually return from the mountains and read the letters? Did Mori actually get in a fight since he doesn’t have any facial injuries? What matters ultimately is that Mori will stay in Seoul and go back to sleep, still seeing Young-sun and perhaps waiting for the person he respects most in the world. The thing that separates this from The Day He Arrives, and indeed most other Hongs, even the other middle period ones, is that Hill of Freedom is a truly pleasant place to be in, where bonds can be established with people over drinks, cigarettes, and flowers, where lightness doesn’t have to require tidiness.