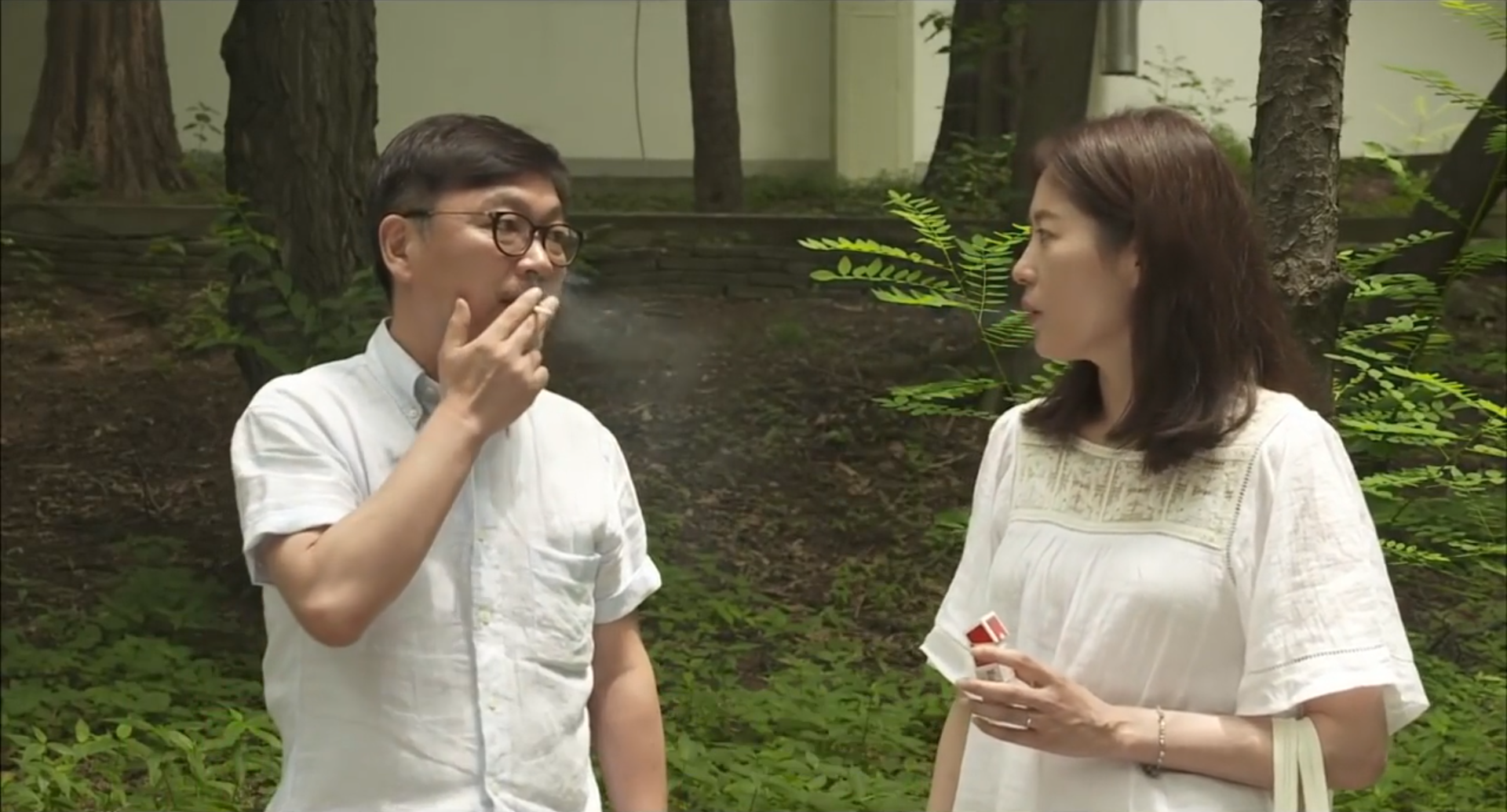 It might almost be too silly to write about “50:50,” Hong’s contribution to Venice 70: Future Reloaded, an omnibus film made for the Venice Film Festival’s 70th anniversary that enlisted seventy filmmakers to make a short film between a minute and a minute and a half long on “their interpretation of the future of cinema.” Running twenty minutes shorter than Hong’s other shorts, to say nothing of even his slimmest features, and taking place in only two shots, it would appear to be too slight to even consider among his actual body of work. But just as Hong’s trailers and other ephemera (which I’ll likely cover, albeit not as their own entries) form a surprising place in his filmography, so does “50:50,” which I might be overvaluing but which is so compact to me that I can’t help but love it.

Despite probably having been shot the summer it actually premiered, there’s a concision and preciseness of writing that doesn’t strain to reveal itself in the conversation between Kim Eui-sung and Moon So-ri. First, his surprise at the strength of her cigarette; she describes it as being “right for her.” Then, the casualness of Kim saying that Seo Young-hwa — who appears to be his wife though this isn’t stated outright — might die, among the most flippant mentions of death in Hong’s work, along with the starkness of the odds she has to live. Then, Moon compliments Kim by saying he’s considerate; he responds that he should be since he doesn’t earn much, and then she compliments him again by saying he looks well off enough. Finally, Moon points out that Kim should go and that Seo might be lonely; he agrees, but before he can go back the camera pans left to show Seo coughing by herself. Of course, at the start of this second shot Hong can’t resist throwing in just one zoom out.

This certainly is as clearly about the Hongian man as any of Hong’s work in this middle period, with all actors playing some version of their past characters: Kim as the slightly oblivious but earnest man, Moon as the concerned but charming woman, Seo as the slightly inscrutable but kindly woman. Nothing else of Hong’s traditional tropes are present — no drinking or food, no apparent creative people — just the simple act of sharing something illicit that can harm other people. The preciseness of the dialogue — though this barely comes in under 90 seconds — fills in all the information one needs to know about how these characters interact with each other, and those interactions, along with the slight twists in structure (most filmmakers likely wouldn’t include that last pan) capture Hong’s essence, as pure a distillation as his other shorts while also functioning as its standalone piece.

As for how “50:50” might interpret the future of cinema, I’m reminded of “Sax and Violins,” Talking Heads’ contribution to the Until the End of the World soundtrack; David Byrne, instead of trying to imagine how music would sound a decade onwards as per the prompt, decided to make something that sounded exactly like Talking Heads did at the time. I feel like Hong opted for a similar approach, entirely to the film’s benefit.