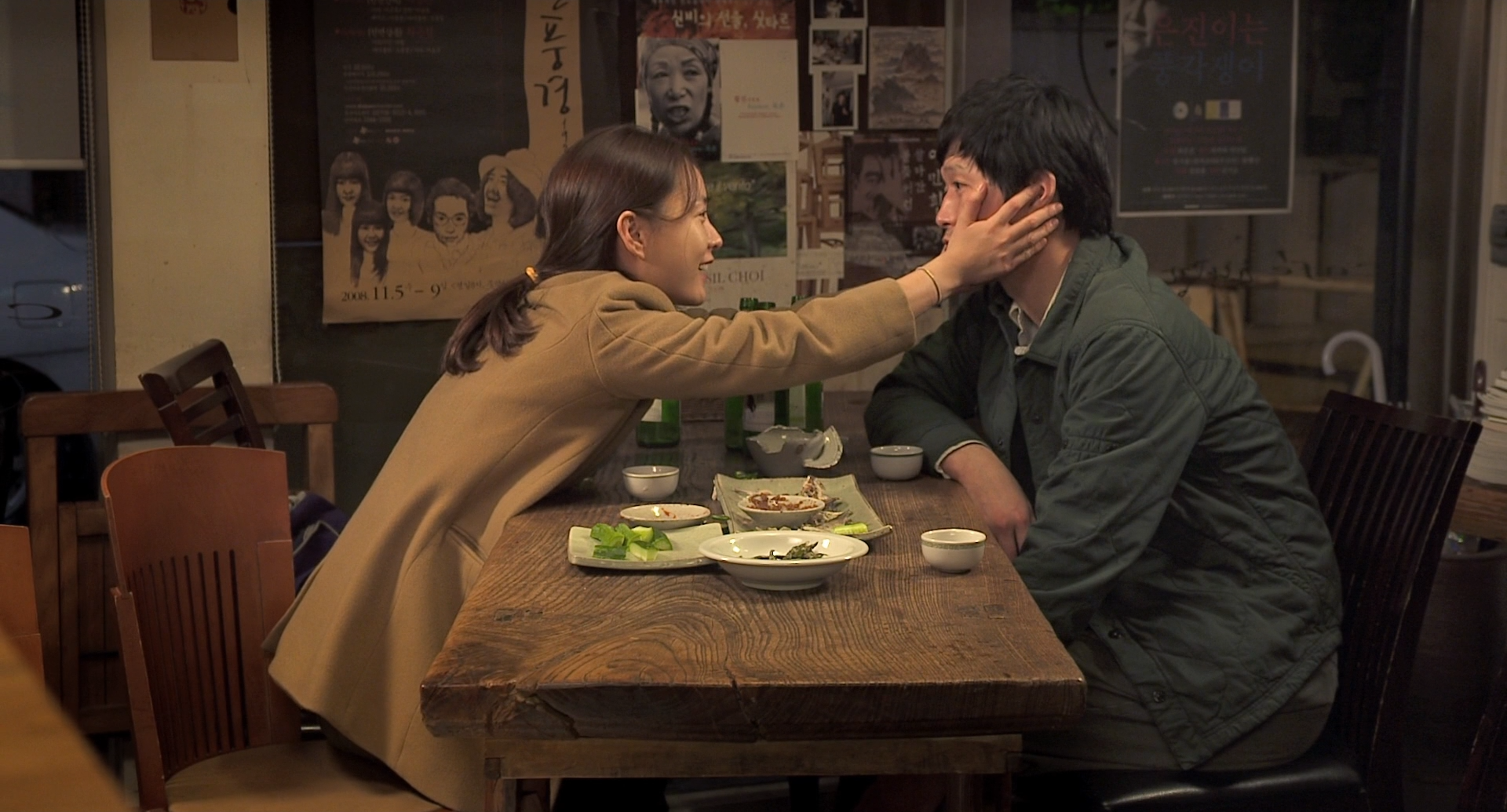 I tend to subscribe more closely to the idea of slow cinema as an actual movement or general mode than most; while it’s absolutely the case that a Tsai, an Apichatpong, or a Diaz take much different approaches and often vary the way their own films are made, there is still a general sensibility that feels rather in common. But I’ve never quite understood why, at least at the start of his career, Hong was lumped in with slow cinema, or maybe more precisely the equally nebulous term Asian Minimalism. While it’s true that his sense of narrative is unconventional compared to the mainstream, and indeed his films have progressively been sidelined in South Korean circles at large, starting from the second half of the 2010s on, his films tend to feature a number of clearly definable scenes. None of the shots are too long, there are frequent emotional outbursts, and there’s little cutaways that break up the flow of conversation. That’s in part what makes Our Sunhi, the final entry in the Jung Yu-mi saga, so unexpected, a clear divergence that, since I saw it remarkably early in my first run-through of Hong, wasn’t aware of.

Our Sunhi can fairly be described as Hong’s first film approaching minimalism: with just 42 shots in an 89 minute film, it’s the first one where the average shot length is longer than two minutes. This isn’t to say that this doesn’t feel like a Hong film; in narrative, dialogue, and ultimate resolution, this fits rather snugly into this early-middle period, putting a definitive cap on this ear of his filmmaking. But amidst this, there are two utterly remarkable scenes that begin like any other: people sitting and drinking together in a cafe; they end up both being just under twelve minutes long, a durational approach that Hong has never quite used before. Consequently, there are little pauses and gestures, as people appear to collect themselves, struggling to think of what next to say.

These scenes, of course, serve as neat repetitions of each other, with the fried chicken actually being delivered the second time and the recurring strands of conversation that run through the film brought up. But they’re also inverses: the scene between Mun-su and Jae-hak ends with a sort of détente in their debate, while the one between Sunhi/Seonhui and Jae-hak ends with them fully falling for each other. I also wonder if this is the first Hong where the actors are actually drinking on set. The only one I’m sure about is Right Now, Wrong Then, but both here and in the first drinking scene Lee Sun-kyun is absolutely incredible; he fumbles over his words when he talks about digging deeper and repeats it several times — given Hong’s dislike of improvisation I wonder whether that was written in the script — and generally exhibits an even greater belligerent confusion than the normal Hong drinker.

As both the last Jung Yu-mi Hong and the last Lee Sun-kyun Hong, watching Our Sunhi with that knowledge is almost a vastly different experience, everything feeling that much more final than the already extremely funny valence it had before. It’s also the second of two Hongs with Kim Sang-joong, with him given a much larger role than in The Day He Arrives; it’s tempting in some way to simply say that he has the Moon Sung-keun role from past Jung films, and indeed he has that semblance of favoritism; he’s the last man that she sees, and for all the viewer knows she could fully intend to meet up with him at a later time given his instructions for her to leave first.

New to the mix is Jung Jae-young, who immediately brings a new, almost more melancholic feeling to Hong; it’s certainly no accident that Jae-hak is the common participant in both of the extended shots. The shot of him in his apartment, the first time someone’s living space has been seen in Hong since Oki’s Movie, is darker than any other scene in the film even though it’s daylight outside. His appearance, too, is distinctive; it’s mentioned he’s been sick, which is brought up again in On the Beach at Night Alone, and he has a certain gauntness to his visage. In essence, that’s what makes his role in the film fascinating: he begins as something of a counselor for Mun-su, then a playful friend for Dong-hyun; he initially tries to be a source of reassurance for Sun-hi before succumbing to his attraction for her and the way she uses his own descriptions of her to describe him. By the closing scene, he’s become just another one of Sunhi’s admirers, as lost and besotted with her image as the rest of them.

In many ways Our Sunhi is easier to parse than other Hongs: the descriptors of Sunhi — odd, great artistic sense, smart, courageous, innocent, honest — are repeated enough, in both the two reference letters and in each of the men’s compliments of her, that even a Hong neophyte could probably understand the driving force behind them. What’s less obvious, in a generative way, is exactly how it pertains to Sunhi’s true character. It’s not true to say that she’s only seen in relation to the men, or that the film is merely accepting the projection of her like in an early Hong: her insistence on leaving when she feels like it — Sang-woo and his jokiness is a welcome loose end — and her way of adapting to each encounter, bettering her position in some way with each interaction, fits in with both the film and as a culmination of all of Jung’s characters. Crucially, the only true backstory we get about her is shrouded in mystery: she doesn’t get along well with peers due to some form of shyness and she can sometimes disappear for years at a time — part of me really hopes that Jung’s done just that with Hong, and that she can come back sometime down the line, maybe even opposite Kim Min-hee.

Sadly, I haven’t been able to determine what the Korean song that plays thrice during the film is; it almost reminds me of how Tsai uses Chinese oldies in his films, with a similar sentimentality that’s made inscrutable by their usage. Here, in particular with Mun-su’s scenes, it’s almost a mocking reminder of his inability to rekindle his relationship with Sunhi, in contrast to the communal chicken eating between Sunhi, Jae-hak, and Joo-hyun — Ye Ji-won, for once not partnered with Yoo Joon-sang. I also swear that Lee looks into the camera once or twice; whether alcohol-induced or not, it’s a fitting and odd send-off for one of Hong’s great recurring actors (who’s now somehow starred in an Best Picture Oscar-winning film).

If Our Sunhi (for me) brings to an end the streak of films from Night and Day to Nobody’s Daughter Haewon, a period of six years and seven truly masterful features, it’s through no fault of its own, and it’s as delightful and unexpected as many of Hong’s mid-tier work. I do have to wonder if Hong is describing his own work at least a little in Dong-hyun’s excessively fawning second reference letter for Sunhi: experimental pieces far from existing narratives, avoiding the trap of self-absorbed expressions, free from the constraints of certainty and finding poetic expression. If this represents an unexpected and quite successful experiment, it also results in one of his most Hongian endings: three men wandering Changgyeong Palace, looking for the woman they all see the same way, who’s already left behind a sign that literally says “Way Out.”