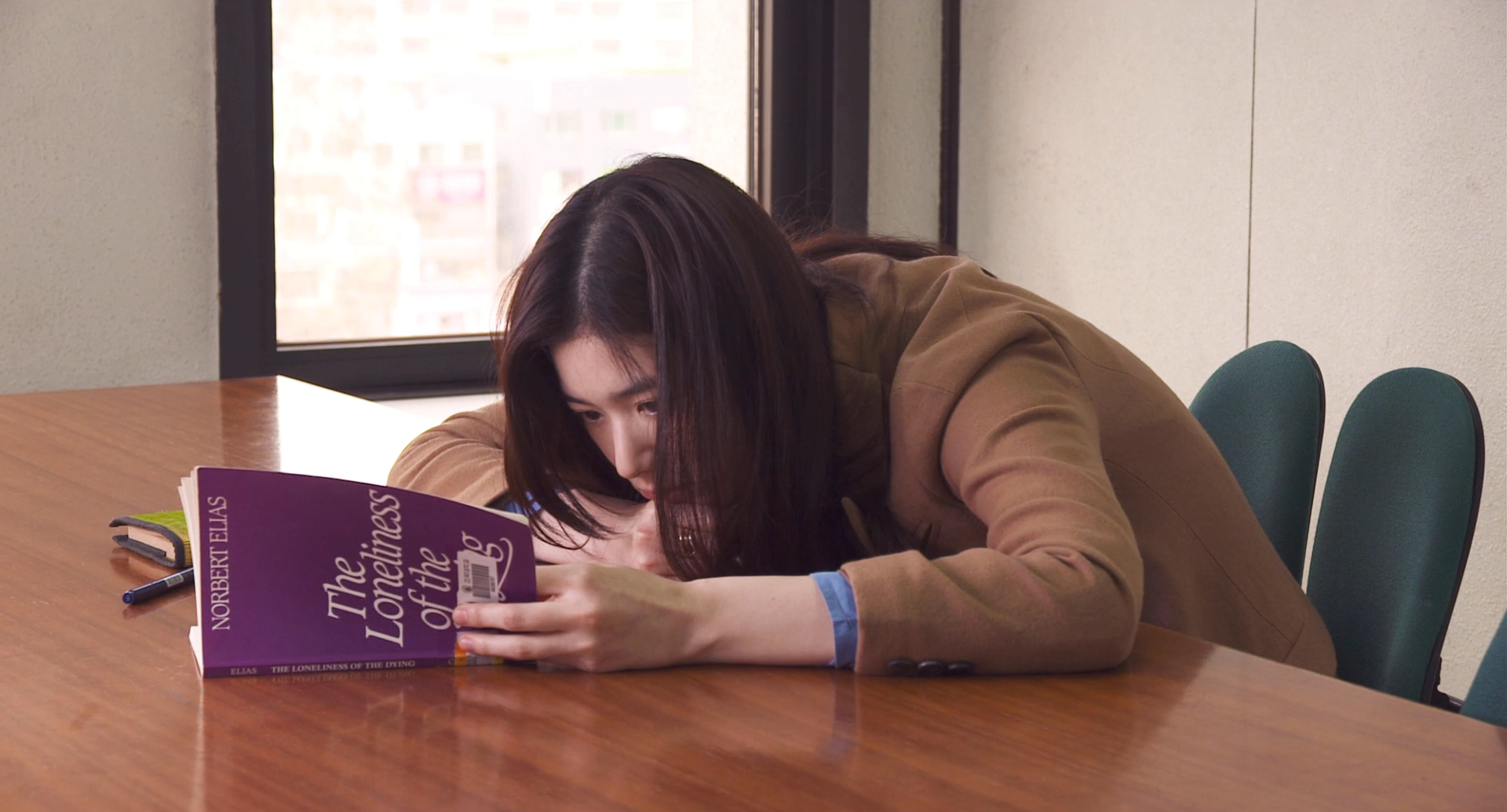 At first glance, Nobody’s Daughter Haewon seems like an outlier in the neat Jung Yu-mi cycle that will come to a head in the next film, without the clear continuity that Hahaha and The Day He Arrives had in putting Yoo Joon-sang in the lead. For one, it is the first time since Night and Day that Hong has put an actor new to his universe as the lead, not to mention the title character, something previously only afforded to Oki and Soo-jung (the virgin stripped bare by her bachelors). For another, it could be seen as a Jung film that simply doesn’t have her acting in it: the love interest is Lee Sun-kyun as a film professor once again, there’s a mention of a Professor Song, and there’s a greater emphasis on unreliable or ambiguous events, here via an extended dream sequence in the manner of “List.” But Jung Eun-chae, who only appears in one more Hong, has a distinct presence all her own, and in its own way this film plays with unsettling undercurrents in a manner more akin to The Day He Arrives while also accessing a piercing emotionality; something of an strange but enormously successful hybrid for Hong.

The complexities begin with the title of Nobody’s Daughter Haewon; between this overt statement of rootlessness and the first fifteen minutes of the film where Haewon spends time with her mother and dreams of, of all people, Jane Birkin as her mother figure, an immediate contradiction is established that the rest of the film only begins to fully unravel. For even though Haewon is certainly the main character, the film is at its core dedicated to trying to determine who exactly she is as a character, something constructed during each interaction she has with another character.

This is in large part owed to Jung’s performance. Unlike, say, Jung Yu-mi’s expressiveness or Yoo’s hangdog expressions, Jung has something more cagey, an innate sadness influenced by her mother’s departure to Canada — like Moon-kyung in Hahaha — and the weight of her affair with Seong-joon; the guilt about infidelity is far more emphasized than normal, especially considering his baby, and the secrecy about their relationship is almost absurd. There’s also, as Birkin notes, something of a Charlotte Gainsbourg quality to Jung; she lived for nine years in England, is notably taller than other Hong women — which may or may not reflect mixed-race heritage, an unexpected detail thrown out during the only true Hongian scene of drunken conversation — and her face is more defined, a quiet determination in her eyes that makes her more overtly unpredictable than almost any Hong protagonist thus far.

That unpredictability defines Nobody’s Daughter Haewon, not only in its dream sequences and upending of the last third of the film; aside from Haewon in the library, the last “real” image is of Seong-joon crying alone in Fort Namhan, and the final shot and line are some of Hong’s most mysterious moments. For one, there are the two decisive shifts in perspective, where characters talk about Haewon while she isn’t within earshot; Hong almost always has one of his main characters in the conversation in every scene (Seong-joon doesn’t quite qualify), so these exclusions feel incredibly pointed. While one is openly hostile, film students deriding her dating habits and supposedly aristocratic manner, and one is more of concern, both set her apart as different, calling the viewer to see her as a new kind of Hong protagonist, one that should be examined even as she introduces each party by writing in her diary (a possible callback to The Day He Arrives).

Even though there’s the putative structure of days that’s reminiscent of Night and Day and the conscious repetitions, especially the recurring use of “The Spot” cafe/bookstore and the cigarette, this is probably the first Hong that I found genuinely hard to pin down structurally. It can be roughly subdivided into interactions with certain people, although Seong-joon floats in and out without warning, and is initially set off-balance by the dedication to Haewon’s interactions with her mother Jin-joo (Kim Ja-ok, who died of cancer a year after this film). The caginess is there already: her hesitancy about the prospects her mother mentions, the willingness in her dream that she has to sell her soul to be like Gainsbourg, the idea that living is dying and that seizing the day is necessary when a person comes closer to death with each moment. But the final scene they have together, where Jin-joo recognizes her daughter’s growth and the plan for them to just have happy days from then on, is really quite moving, in the same manner as in Hahaha, only for Haewon to fall into her old habits again.

Among other things, Nobody’s Daughter Haewon is maybe the most unexpectedly metatextual Hong yet, where characters and motifs from other films float in without warning. Joong-won, a professor from San Diego who apparently is rewriting a script for Martin Scorsese, is played by Kim Eui-sung, who enacts the exact same “two extremes” approach of reading a woman as he does in The Day He Arrives. When he injures himself while drinking, Seong-joon has almost the exact same facial wound as Kyeong-nam in Like You Know It All; Kangwon Province is mentioned again. Beethoven’s Symphony No. 7, used as the credits music for Night and Day, becomes the theme of this film, with Seong-joon listening to a synth version of it as his mood music. Most destabilizingly of all, Joong-sik and Yeon-joo reappear as themselves (and played again by Yoo and Ye Ji-won, the latter with a much shorter haircut) from Hahaha, with Joong-sik still taking his depression pills and wearing his glasses (which he doesn’t do in other Hongs); apparently, he’s still married despite swearing to live with her, and their affair has now been going on for 7 years at this point. Since this is part of the dream, which lasts even longer than the previous longest one in “List,” it’s unclear whether these are simply projections of her mind (which may have even seen these Hong films in-universe) or incorporating her actual friendships with these characters, but the possibilities intermix, as if suggesting that the only way to understand Haewon — and Hong at large — is through other films, which is of course a great part of the Hongian approach.

Other parts, while not as explicitly related to Hong’s other films, have a surreality all their own: the repeated use of the lit cigarette on the ground even after Dong-joo, the awkward bearded bookseller, departs from the film; the reappearance of a few film students from The Day He Arrives; the amazing details of the drinking students — I’ve always been incredibly fond of the woman who’s slumped in the back, about to fall asleep at any moment. There’s also Gi Ju-bong as something of a counselor figure for both Seong-joon and Haewon, and Joong-won’s apparent mind control that allows him to summon gray taxis and the very nature of his character, which straddles the line between charming and creepy in his sudden conviction that they must marry, coupled with Haewon’s genuine consideration of it.

Still, Nobody’s Daughter Haewon both is and isn’t a film about Haewon dealing with her relationships, where true closure remains in the realm of fantasy for her; her mother is still alive but far away, she can’t quite communicate with Seong-joon in the way she wants; she still lacks motivation to go to class and engage with fellow students who despise her. Instead, she’s left with the English copy of Norbert Elias’s The Loneliness of the Dying, which reminds me of both her observation that death resolves all and of her statement that she’s the devil. More than any other Hong protagonist so far, Haewon is at her core a person afraid to show who she is, whether through “real” conversation or little things like writing in a book or paying an unspecified amount for it. All she can do is sadly dream of such things, and they’re such unsettling, mysterious, wonderful dreams to watch.