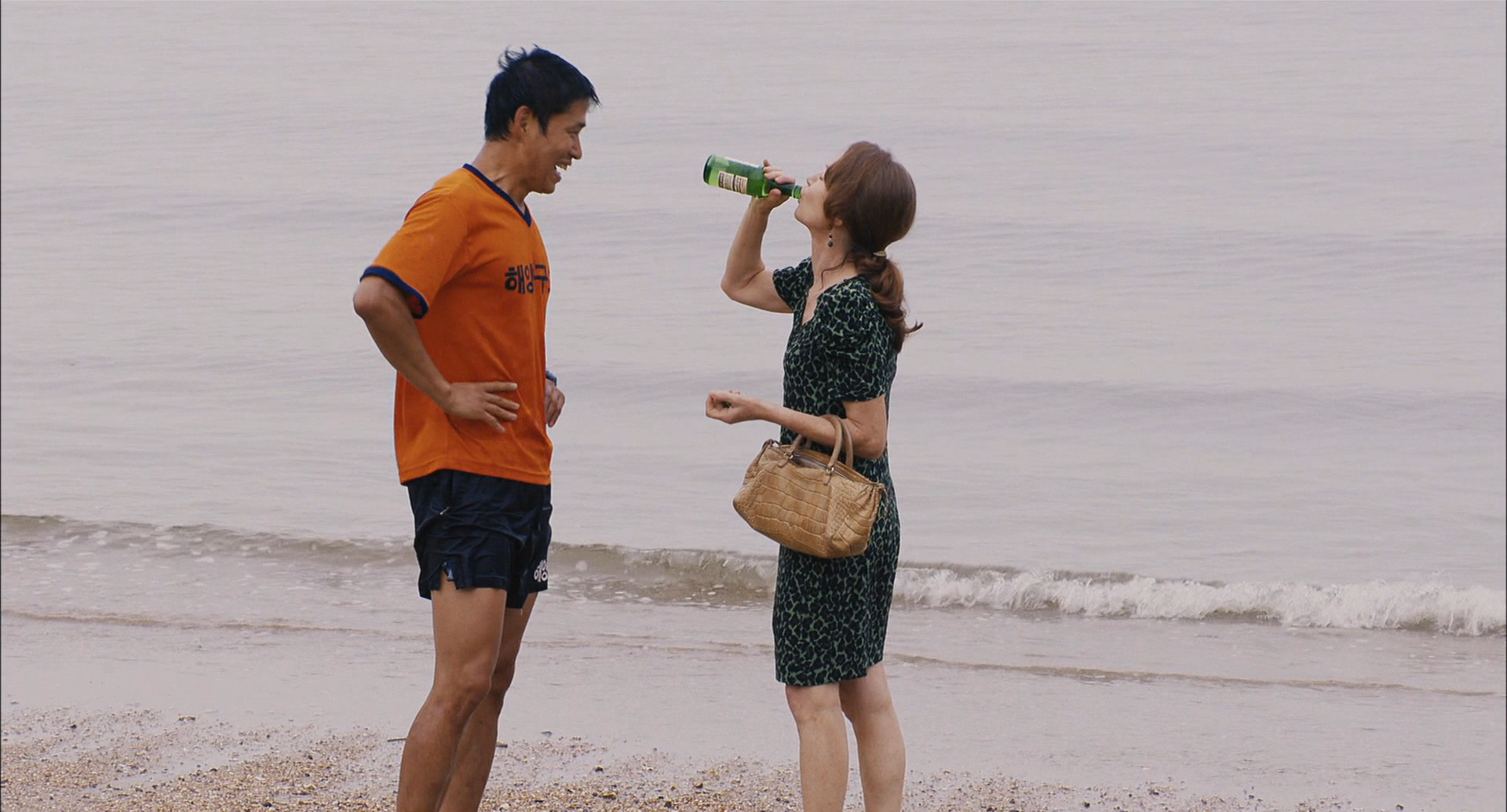 Among his countless strengths, Hong is one of the greatest directors of all time in crafting “major minor” films, where the films that might be perceived as even more sketch-like or tossed off than his others nevertheless contain some of his most piercing insights. His Huppert films, especially In Another Country, have this particular quality for me, and that’s partly why it’s taken me a while and numerous viewings — this was the second Hong I watched, on my 19th birthday — to key in on what makes them so special in his work, above and beyond her presence and their own particular differences.

Huppert and Hong met at a retrospective for him in 2011 at the Cinémathèque Française, and he proposed her acting in one of his films over makgeolli during a photo exhibition for her in Seoul. Indeed, I’m almost certain that her casting played a substantial role in sustaining Hong’s international profile for a few more years: after being mired in Un Certain Regard for the past few films, he made it back to the Cannes Competition, albeit still not winning anything. And, while this was selected for NYFF in Richard Peña’s last year, it did form the third part of the annus mirabillis of the 2012 release year, where three Hongs all played for a week in New York thanks to Cinema Guild, including, for the first time, a film that premiered in the same year. I had assumed this was thanks to In Another Country specifically, but Oki’s Movie and The Day He Arrives actually were released before Cannes on the week of April 20th, but it’s still notable all the same.

But before getting to Huppert, I want to talk about how In Another Country adds yet another shining dot to the Jung Yu-mi constellation. As it turns out, the first three shots appear to be literally reused from the first three shots of “List”; almost the inverse of the relationship between Straub-Huillet’s History Lessons and “Introduction to Arnold Schoenberg’s ‘Accompaniment to a Cinematographic Scene.'” There’s the shot of the West Blue Hotel sign, the conversation between her and Youn before the latter eats some cake — it’s cut off right before the pan left as Jung leans back — and Jung beginning to write on her notepad. But I had also totally forgotten about how Jung incorporates both herself and her mother into the script — for some reason I had remembered it being three aborted attempts at writing a script, instead of a purposeful structuring of three separate stories about a charming French woman named Anne (a Haneke reference?).

In all three, Jung is the helpful hotel manager Won-joo, perhaps after moving to Mohang like she suggested in the conversation with her mother — though she says she’s taking time off, and her given age of twenty-five seems less than the conversations in “List” suggested. She makes tuna sandwiches, introduces people to their rooms, and goes out with Anne each time, though they always seem to either part ways or lose each other. Each time she is told she is complemented by Anne, and each time she self-effacingly demurs with a charming politeness; her mother is also cast in the third part as the most totally friendly person to Anne, also getting an opportunity to smoke on the balcony she was on at the beginning. In Another Country itself, even before getting into the “main” narratives, thus becomes a more explicitly playful film for Hong than normal, where the writer — conceiving of these stories to calm her nerves in a possibly tense situation, as opposed to the determination to make the best of her circumstances in “List” — is allowed to participate in the action, a pleasant recurring face that can also take responsibility; it reminds me much more than I expected of Kim Min-hee in Grass.

Still, while Jung’s presence and the importance of “List” are crucial, In Another Country is really dedicated to Huppert in a way Claire’s Camera isn’t. Aside from, as some have noticed, an opportunity for Huppert to utilize her underappreciated comic acting and to shed the adamantium imperiousness that typically forms her screen presence, across the three parts she gets to show very different sides of herself, despite the surface-level similarities of her charmingness and Frenchness.

The first part focuses on her as an outsider the most, largely because of the sharp interplay between the heavily pregnant Geum-hee (Moon So-ri from Hahaha) and Jong-soo — Kwon Hae-hyo, one of my favorite Hong recurring actors in his first role, already playing the untrustworthy man. Huppert is frequently an observer in these scenes, watching as Korean is being spoken in front of her and interjecting with salient readings of tones of voice and reactions. Even in her scenes with Yoo Jun-sang’s lifeguard — hilariously probably the most Hong has fixated a male, or even female body — she often watches as he sings remarkably well, though he’s as much of an ultimate observer across all three story lines as any of Yoo’s other roles, especially in the second part. The only time she truly expresses herself audibly is when she talks about her (relatable) laziness and unwillingness to take on responsibility, to Jong-soo and Geum-hee’s disagreement. In some ways, that’s what makes this incarnation distinct from the others: as an international director inspired by one that Jung’s character at the Jeonju Film Festival — it’s also worth noting that Anne and Jong-soo kissed in a Berlin playground, another invocation of Germany — she also has a certain remove, not wanting to get too involved with anyone and simply visiting for the pleasure of it.

The second part presents perhaps the most unalloyed portrait of Anne alone — wandering around in the town that, in both this part and the third, she claims has nothing, a far cry from Mi-hye’s attitude in “List” — while she waits for Moon-soo; this is the only part where Moon Sung-keun appears, and the first two dreams and third actual appearance form a mini-trio within the triad structure at large. The central dream, in particular, is probably Hong’s longest yet — aside from “List” of course — and, on my first viewing, honestly threw me; I hadn’t experienced anywhere close to the acidity of early Hong, and so I thought the heated discussion in the sashimi restaurant was uncharacteristic. But it also gets across, as much as the halting English that all characters speak (Huppert less so of course), a certain cultural difference: the sarcasm that Anne deploys throughout that’s typically not within Hong’s scripts: people say what they mean, whether it turns out well or not. Anne is in many ways a cagier character than the typical Hong protagonist: when she slaps Moon-soo when they appear to finally meet in the end, it could be to persuade herself she isn’t dreaming again, that she’s still mad at him for being late, or any other reason; the difference from normal is that she says that she’s doing it because she loves him, a more Western expression of love that would be anathema to most Koreans.

The last part is more overtly reflective, not just because it’s about a woman picking up the pieces from her divorce — the inference, of course, is that this is an iteration of Anne where her motor company VP had an affair instead of or alongside her own with Moon-soo, though the wealth she has isn’t explicitly laid out this way — or because it features religion to perhaps the greatest degree in Hong yet. Anne writes in French on a ceiling tile, reminiscent of Ji-sook in The Power of Kangwon Province, and adds what looks like a cross on it; later she will first question and then be bewildered by the monk played by Kim Yong-ok, the only actor in this who isn’t a recurring Hong figure, though his timing and expressions are excellent. Like the impromptu Q&A in Oki’s Movie, these very direct questions — why do I lie? why am I so miserable? what do you mean? what is love for you? — are met by hilariously cryptic koans that nevertheless resound with intuitive meaning. After this, and her request for the Mont Blanc fountain pen that acts as a more concrete thing in this part that feels more abstract and limited by her own understanding than the rest — sadly we don’t get to see the monk’s drawing of her — she is liberated, free to drink soju from the bottle, sleep with the lifeguard, and set out on the “unknown path,” while it appears that Jong-soo and Geum-hee are back again to actually make the film about the “suffering” people of Mohang (we never see any inhabitants, everyone is an outsider of sorts), with the latter possibly pregnant again. Despite the overtones of suicide, it remains much more ambiguous, and indeed almost feels more like a near-omnipotence over what happens in the narrative: Won-joo immediately intuits the significance of the lighthouse — only seen when Mi-hye and her mother find it in “List” and when Anne stumbles upon it without looking for it in the second part; later she can’t find it again — Anne gives up her fruitless quest for the lighthouse, and of course she retrieves the umbrella that was stashed in the previous part.

Little moments of greater meta-awareness on Anne’s part are present in other parts as well: she dreams of the tent in the second part and then finds it; she knows to ask to pay for the international phone calls that Sook had bemoaned moments before; she realizes that Jong-soo will try to seduce her on the dry bed, which for once doesn’t carry over to the third part.

When I first saw this, I recall saying that In Another Country was the type of film I’m almost predisposed to love, foregrounding its repetition in ways that were obvious to me even then. That’s still true, but more and more I’ve come to adore the mysterious manner in which Hong evokes it and finds it within the obvious techniques: the significance of the shot from the balcony of Geum-hee in the second part, who doesn’t otherwise appear and which calls back to her last shot in the first part; Anne saying “c’est beau” twice in the second part; the fork in the road, which is taken to the right in the first and third parts and left in the second; the lifeguard saying he’s not cold in the first two parts (in different contexts) but cold in the third. The foreignness of Anne, and her ability to transcend and escape the narrative structure in a way that Yoo and Jung can’t quite in their films, are definitely differentiating factors, as is a greater focus on aging (especially for Sook), but the plays with repetition are all Hong’s own.