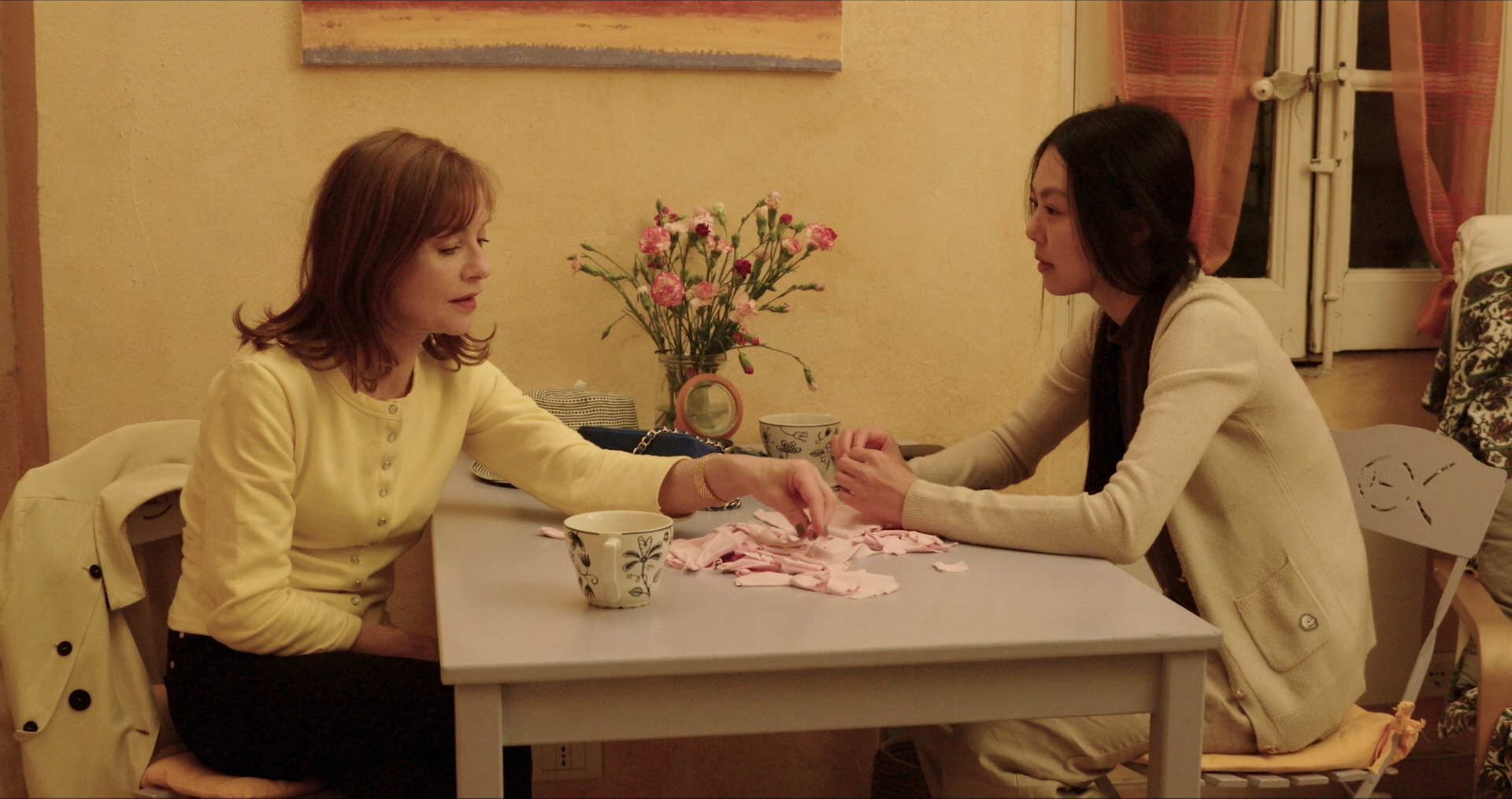 I actually didn’t realize that Claire’s Camera is the Hong film that I’ve seen most, even more than any of the shorts. It’s not the shortest Hong — there are now three features that are shorter, including Hill of Freedom — and it’s nowhere near my favorite; I don’t even necessarily see it as breezy as most Hong acolytes. But it’s probably the Hong I’ve actively tried to understand/love the most, partly because of Sean, who adores it and has expounded many equally fascinating theories, and partly because I feel like the tossed-together quality — if I recall correctly, Hong and Isabelle Huppert spontaneously decided to make a film at Cannes 2016 and filmed it in just a handful of days — makes this deceptively slippery, where the undercurrents of mystique seep in under what seems to be incredibly light, even by Hong’s standards. It took my four full viewings to love this on the level of Hong’s other work from the 2010s, but I’ve come to embrace the strange conflict it raises within me.

Part of what makes it strange is the use of two female leads, especially two as captivating as Huppert and Kim Min-hee; the charisma they exude is similar, especially because Claire is a considerably more effervescent/less burdened character than Anne was, and so the back-and-forth motion that the film’s structure leads to, jumping between the two women before they meet just before the halfway point, only to then go back to the Chinese restaurant scene between Wan-so and Yang-hye — I forgot that both Oki’s Movie and this had baijiu scenes — creates an odd momentum that doesn’t quite flow in the usual Hongian way. This is maybe because Jung Jin-young and Chang Mi-hee (who doesn’t appear in any other Hongs) lack that history with Hong, though I hasten to say that both, especially Jung, are terrific.

It’s also strange seeing Kim playing an “ordinary” character who has to report to a boss. Something that I’ve always gravitated to in her performances is how she seems both within the world and apart from it, which will be taken to new heights in the films to come. Here, however, it’s kind of bizarre to watch her just writing down things in forms and taping up crates in the opening and closing scenes, performing these mundane tasks that Hong lingers on for relatively extended periods of time. But what makes, for instance, the scene where she is fired by Yang-hye is the unpredictability added to what could otherwise be a rote flashback scene; Man-hee’s sudden affection for the dog previously out of frame and her taking a selfie enliven things greatly.

Perhaps that’s something of what makes Claire’s Camera difficult to totally embrace for me: the surfaces aren’t as immediately compelling as Hong’s other work of this period, and it’s only in brief snatches of repetition or moments that arise out of nowhere that he truly reaches those same heights. The Cannes setting almost makes things unreal in a way; where everyone is transient, even Claire — despite the foreknowledge of Huppert’s experience with the film festival and the knowing irony of Claire saying it’s her first time in Cannes, she embodies the feeling of being lost in a city perfectly — the societal strictures deeply felt in South Korea are slightly more abstract, and the sales company, presumably the actual FineCut booth because of the conspicuous Yourself and Yours poster, is fairly nebulous.

Then again, Claire’s Camera‘s comparative nebulousness, especially in comparison to the sensation that everything in the films since at least Hill of Freedom was freighted with meaning, is one of its most endearing qualities. Little moments rise without warning: Man-hee reveals that she likes to compose children’s music, Claire and Wan-soo take time to learn a Marguerite Duras poem, a short film director talks to Man-hee about how you need honesty to make a feature film. There’s a greater air of randomness and chance to the film, which really begins in earnest when Claire and Wan-soo first meet, extended awkward pause and all, that allows for quick stops along the way of what seems to be a fairly comprehensible narrative surrounding the Koreans that Claire flits into and out of, lending local color in every scene she’s in.

Comprehensible, that is, until one factors in Claire’s depicted photograph of Man-hee and the “hot pants” scene (which reminds me of Moong-kyung chastising his mother for wearing a revealing top in Hahaha). In the former, Man-hee never wears an outfit that resembles the one she’s wearing in the photograph in the film proper, to say nothing of the seemingly inconsistent outdoor light in the Chinese restaurant scenes (which also feature a half-hearted attempt on the part of Yang-hye to start over in her relationship like in Yourself and Yours); it looks near dusk when Claire leaves, but then becomes bright daylight when she comes back to retrieve her coat.

The latter would appear to be an explanation of the photograph, but it would appear to take place the day after when Wan-soo is going to his gala screening, and again Man-hee is wearing the wrong outfit. One of the most memorable screenings of my life was watching Claire’s Camera at VIFF sitting a few seats away from Mark Peranson, and he told Sean, Evan, and I that, first, his character is named Paul like in On the Beach at Night Alone and potentially the same person. More relevantly, Claire is in the scene because apparently Huppert was on set and annoyed that she didn’t have a scene that day; Hong inserted the scene and thus the whole chronology and web of character relationships is disrupted once more. I’m definitely sympathetic to Sean’s current hypothesis that the film involves time travel, with Claire going into the tunnel that Man-hee looked into before to take the photo and thus alter the outcome, allowing her to get her job back, but obviously I can’t be certain; Hong did apparently find the idea very funny when he heard about it though.

Weirdly, I think the fundamental seed of Claire’s Camera comes from the scene in In Another Country where Anne concludes that all the women in the conversation are pretty. There’s a fascinating dynamic between Man-hee and Claire, where they both eventually come to the same conclusion about practically everything: elevators, the painting, Yang-hye, Wan-soo the drunkard — the quote “95% of my mistakes in life were because of alcohol” is eternal. Despite the substantial conflict in Man-hee’s situation and the total lack of plans or preconceptions on Claire’s part, the two form a nice, symbiotic bond; even though there are really only four scenes where they are together, the viewer believes this connection instantly.

Indeed, the general pleasantness of many of the scenes makes the longer conversations, especially with Yang-hye and the more generically jealous way she’s written, stick out a little more than usual. But that’s made up for in scenes like the audio flashback (which Hong has never otherwise done) to Man-hee’s firing, which she first hears and then reenacts before the adorable dog reappears, and the notion of past interactions bleeding into the present space has only really been front and center in Tale of Cinema.

And of course, there’s Claire’s camera itself (leaving aside the probable Rohmer allusion). As others have noted, it’s quite similar to Yangyang’s idea of photographing the backs of people’s heads in Yi Yi. However, I noted this time that Claire provides slightly different explanations to Man-hee and to Wan-soo and Yang-hye. To the latter, she cites how people change in the moment when you take their picture; to the former, she says something less related to photography and much more relevant to Man-hee’s situation: that the only way to change things is to look at them again very slowly; Claire’s method is by taking pictures and getting the time to observe one’s face and eyes.

Man-hee’s is left up to interpretation, but the clothes cutting, which seemed somewhat arbitrary before, strikes me now as her own take on it, reframing something by examining it in the act of destruction. It also leads to perhaps the only truly emotional revelation about Claire: her boyfriend, a bookstore seller who told her piano — probably the one from On the Beach at Night Alone — died a few months back. This in turn almost seems to create a space for improvement for Man-hee; the last shot of Claire is in some ways humorous, her repurposing the shredded clothing for a bra, while Man-hee is able to return to her employment. Things work in mysterious ways in Claire’s Camera; it’s equally likely that Man-hee got her job back because of Yang-hye’s rejection by Wan-soo (people definitely focus on the names’ similarity to Kim’s and Hong’s, perhaps too much so) as it is because of Claire’s time-traveling intervention. Hong’s universe is big enough to comprise both, and that’s what makes even his slighter films count.