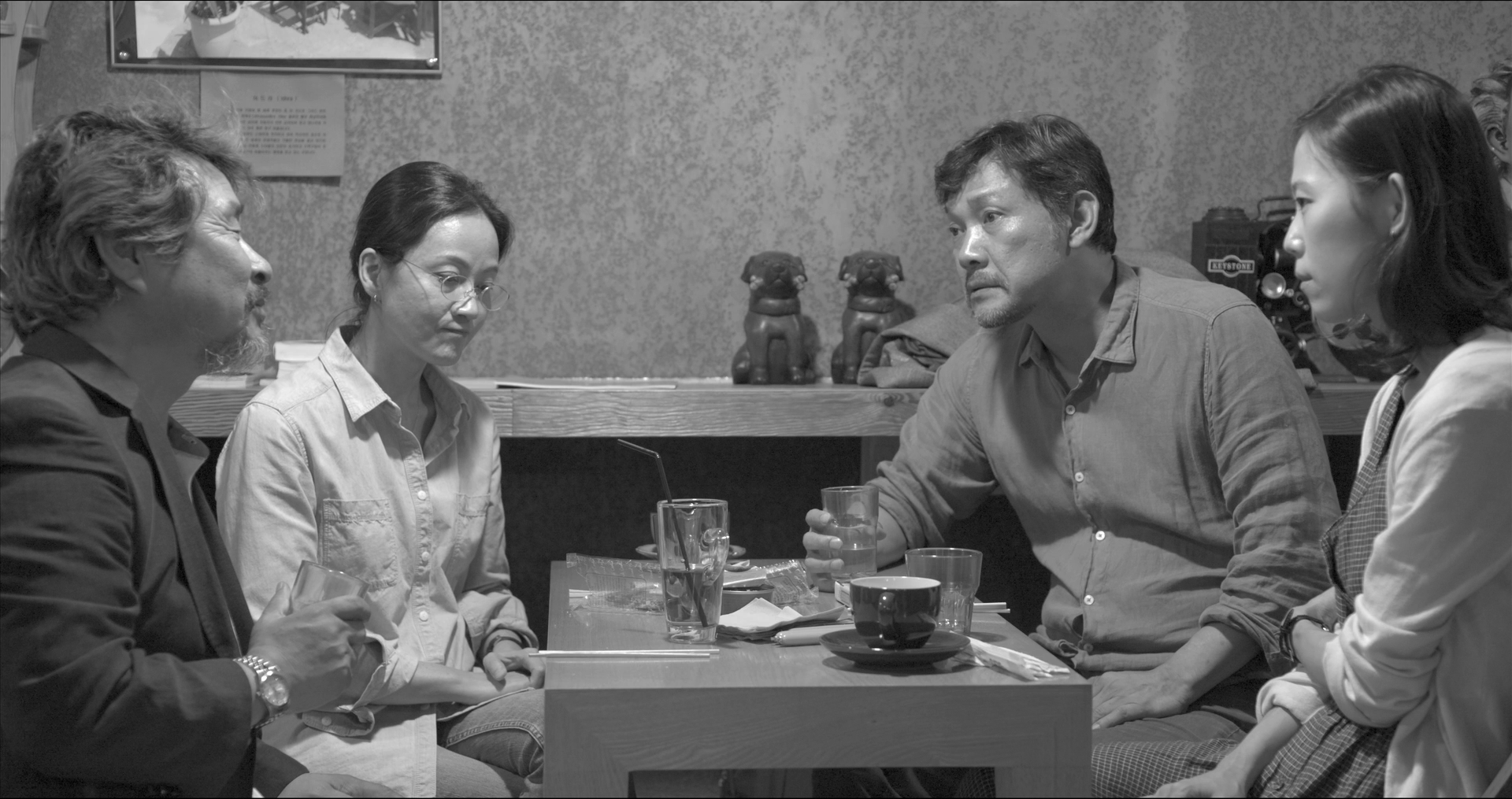 Potentially Hong’s most Rivettian and overlooked film, Grass would seem to embody what would be minor in any other director’s universe. Running just 66 minutes, it premiered in the Berlinale Forum, the sidebar organized by Arsenal typically reserved for boundary-pushing work even though On the Beach at Night Alone won a prize in competition the previous year, and generally was ignored by most non-Hong acolytes, who generally tended towards its successor. But ever since I first saw it, Grass has consistently felt among Hong’s most fascinating and moving works; it is certainly true that a minor Hong is major, but its magnificent complexity seems to openly defy such simple categorizations.

For one, Grass splits open the question of the Hong lead even more openly than The Day He Arrives did. The logical idea is to label this a Kim Min-hee film: she’s explicitly put front and center as the observer; she has voiceover narration of what might be her descriptions of the events in front of her, what might be her script and/or diary, what might even all be her imagination. The film in many ways feels like it’s building up to her final decision to actively engage with those she’s been eavesdropping on; her name is even Ah-reum, her heroine’s name in The Day After. But her narrative is only really centered in a few scenes: her interaction with Kyung-soo — Jung Jin-young, Wan-soo from Claire’s Camera, in a pivotal role here — and the extended scenes with her brother Jin-ho (Shin Seok-ho, the future lead of Introduction in his first Hong film).

Instead, Ah-reum functions almost akin to Anton Walbrook’s master of ceremonies in La Ronde, whose presence links and shapes the viewer’s understanding of the narratives that we see beyond simply their shared space. Probably Hong’s most stripped down feature yet, using only 26 shots in the whole film (one more than the number of zoom-ins alone), the structure initially seems to be clear: two people have a conversation in the café — the man sits on the right and has an iced coffee, the woman sits on the left and has a hot coffee — that involves a mention of suicide and a tense relationship, which first happens between Hong-soo (Ahn Jae-hong, in probably his biggest Hong role) and Mi-na — Gong Min-jeong, the eyepatch wearer in Yourself and Yours and Sang-won’s companion in On the Beach at Night Alone — then Chang-soo (Gi Ju-bong, finally sporting a beard) and Sung-hwa (Seo Young-hwa). But that gets interrupted immediately after, shifting first outside for a more light-hearted conversation between Kyung-soo and Ji-young (Kim Sae-byuk, Chang-sook in The Day After), then Kyung-soo directly interacting with Ah-reum, then the trio of scenes that leave the café and decamp for a restaurant.

This is one of the crucial paradoxes of Grass: on the one hand, it could be perceived as one of Hong’s simplest narratives, a single day moving from day to night. But on the other, its structure warps, constantly changing the viewer’s preconceptions of what it’s supposed to be, and making the passage of time as hazy as The Day He Arrives. It is almost like a Hong film that was composed of his past characters but stripped of the context to their conversations, leaving only these spaces of play and chance that shift with each line of dialogue in much the same way as Rivette’s narratives operated. It’s easy to glean pretty early on how much it invokes death and uses it as a recurring theme, but character relationships become and stay fairly uncertain past that point: Hong-soo and Mi-na declare their love for each other (and the latter’s Europe trip is just for show) after having a rancorous discussion early on, Kyung-soo and Ji-young have either an intense friendship or an affair, the relationship of Sung-hwa is much quieter and less evident than the actors and writer she’s surrounded by (the way she looks on during Kyung-soo and Chang-soo’s discussion is amazing).

Even, and especially, Ah-reum is not immune to this. If I was being excessively contrarian, I’d call this Kim’s best performance, if only because it so radically diverges from the nigh-angelic image in Hong’s other films. It initially begins like that, with her quietly sitting in the corner and her hushed voiceover calmly assessing the difficulties present in the two conversations. But once she leaves to eat with her brother and his girlfriend Yeon-ju (Han Jai, another recurring background Hong face), her entire demeanor seems to shift. It’s certainly true that Kyung-soo’s proposal to use her as inspiration doesn’t come across nearly as well as he was probably thinking — it’s left deliberately unclear whether he’s actually attempting to ask her out, though in general he plays a nicer version of the depressive Wan-soo — but Ah-reum generally has the same sort of reticence she had in The Day After in this first section.

Aside from the opening scene of Tale of Cinema, I don’t think Hong has ever really focused on siblings, but it’s truly remarkable seeing how much Kim changes her style to accommodate the bossy older sister role, mercilessly mocking her younger brother’s naiveté and disdaining love as creating burdens for others. After a brief détente created by Yeon-ju replying that all men are cowards (except Jin-ho), Ah-reum first gets in an argument with her brother, walks towards then away from someone singing with a guitar, then returns to the café. Her voiceover then takes on a wholly different tone, first scorning the repaired relationship between Hong-soo and Mi-na, then mournfully wondering if she can have some of the smuggled soju, if she’ll ever have the same kind of connection that Kyung-soo and Ji-young have — “People are emotions. Emotions are gullible and forceful, precious, cheap, and alluring.”

That Ah-reum does get to finally have that sip of soju fits in well with Hong’s renewed focus on finding common ground between his major characters in this late period, but it also heightens the murkiness between observation and imagination, documenting and narrativizing. It’s entirely unclear whether the first two conversations really were as complicated and fruitless as Ah-reum perceived and/or wrote them; while participants of both conversations are seen in the same frame as Kyung-soo, there’s no real interaction between them until after she assumes her “real”/”unreal” persona, and of course the fact that all of them stay at the café for what seems like eight hours is its own air of unreality. Maybe the shot of Jin-ho and Yeon-ju walking together, one of the few scenes that doesn’t involve Ah-reum in any way, helps shed light: it’s in a kinder register, the brother ruefully noting his family’s difficult side (amusingly attributing the dispute to “spinster’s hysteria”) before the couple decide to get a drink. The bookend of them renting hanboks and taking each other’s pictures as first Hong-soo, then Kyung-soo look on — the significance of Ah-reum taking Kyung-soo’s place at the table as he’s left outside, like he was at the beginning of the film, is definitely worth noting, as are the three stills of the empty café and alley after the final scene — effectively assuming their place within the narrative near the café that they had been excluded from before, is one of Hong’s great unexpected delights.

The other two scenes in Grass that pass by without Ah-reum’s direct comment are two of Hong’s most mysterious and emotional, in vastly different tenors, and which both take place in the restaurant. The first is perhaps Hong’s most unusually shot table scene since he stopped cutting within scenes: the camera is of Jae-myung’s back — played by Kim Myung-su, who was the stepfather in the first half of Tale of Cinema — on the left and Soon-young — Lee Yoo-young, Min-jeong from Yourself and Yours — on the right. Even as the conversation becomes more and more tense, with the suicide of the former’s close friend and the latter’s lover/possible student brought up more and more, the vantage point, aside from a zoom-in, never shifts, leaving almost all of the scene to play out on Soon-young’s stricken face — Lee looks a lot different than in Yourself and Yours, with bangs and darker hair that, coupled with the black-and-white, make her emotions much more stark than her endlessly mutable past character.

If that wasn’t enough, the heavy use of beautiful classical music in the café, which almost drowns out the conversation and suggests a much different undercurrent of emotion from the mundane conversations, is supplanted here by, of all things, what sounds like a recorder, xylophone, and harmonica cover of the minstrel song “Oh! Susanna.” I don’t know what possibly possessed Hong to do this, but it’s an unexpectedly sour but fitting joke to overlay this scene. And of course, there is that startling pan left to the shadow cast by Jae-myung, which simultaneously seems to stand in for both the presence of every single Hongian man blaming the problems of himself and his friends on women, and for all the dead people who have left behind these lonely souls. It is a totally spectral image, recasting everything around it.

If that scene, which even leaves Ah-reum and Jin-ho in uncomfortable silence, is one of Hong’s bleakest, the very next one is one of his most effervescent. As Ji-young waits for her appointment that seemingly never comes to pass, she goes downstairs to see if the person is outside, then walks upstairs to see if her phone has gone off, then repeats this exercise a few more times. Then, she takes her eyes off of these things, simply delighting in the pleasure of the activity, going faster and faster as her smile grows and grows. This arc, embodying emotions through motion and performance, in many ways acts as a synecdoche for every single character’s journey through this film, where practically everyone comes to terms with their circumstances and finds joy within it, even in the face of the death of one’s self or one’s loved one. That it is assigned to the character with the least amount of problems (she even has a new boyfriend) only speaks to the ease with which Hong works, trusting a seemingly minor character to suddenly embody everyone’s worries and their means of lessening it.

The Korean title of Grass translates to Blades of Grass, recalling Walt Whitman, and while the potted plants outside didn’t factor in as much as I remembered, they still have something of a calming force: people don’t speak while they look at the leaves, instead simply smoking and contemplating, whether accompanied by Ah-reum’s voiceover or not. But nobody stays in this means of stasis for very long; they are met by a friend — the friendship between the four fellow drinkers isn’t revealed until Ji-young approaches Chang-soo — or are pulled back inside, ready once again to face the uncertainty of relationships and be reconciled. Though the owner is often described, he is never seen on screen; I like to think that it’s Hong, watching over his beloved actors and spaces in much the same way as his partner does in the film, revealed with a simple pan and zoom.