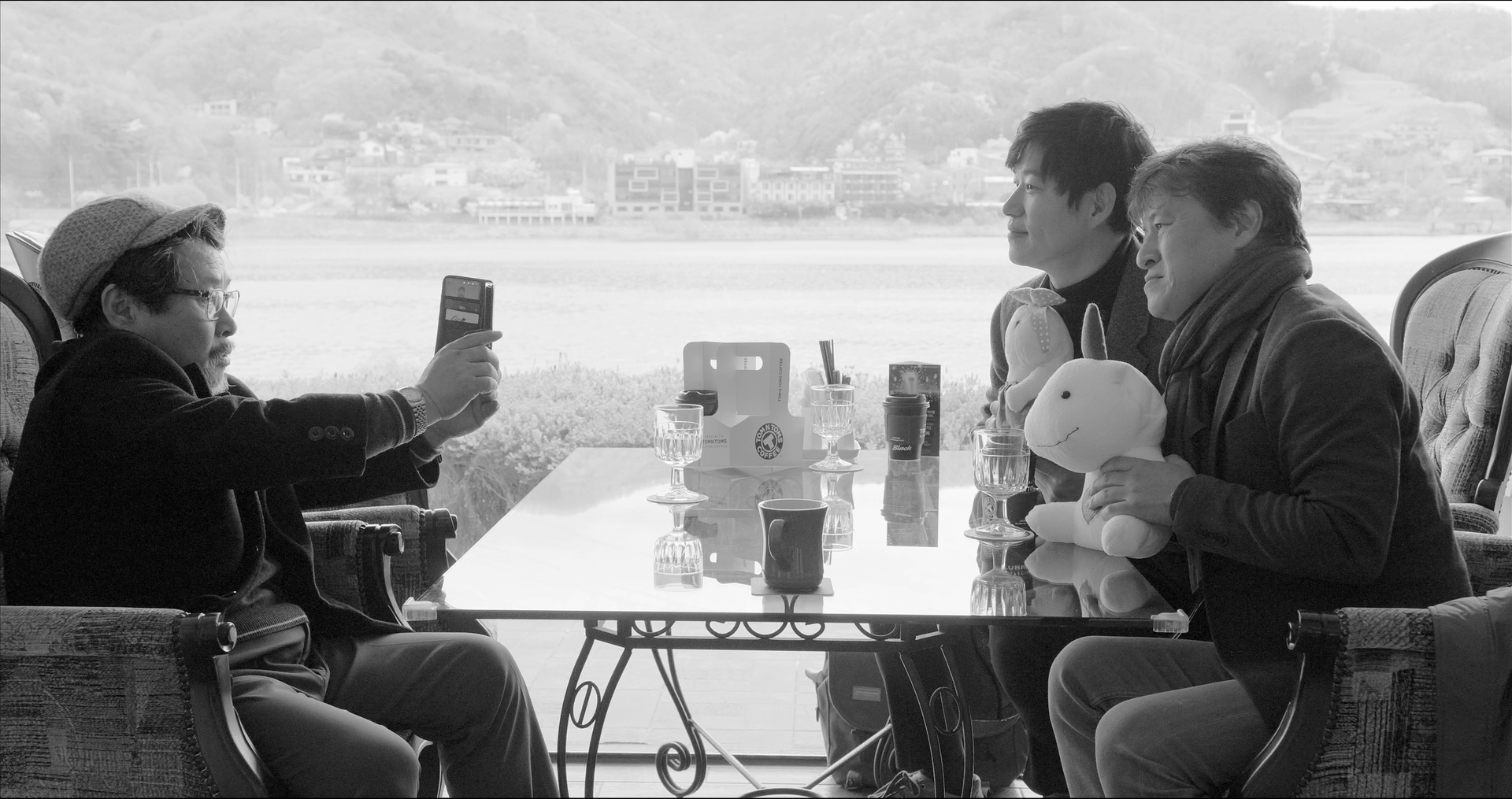 Maybe this is the case with most directors with a small but strong following, but I tend to feel that the most popular and/or “conventional” Hongs tend to pose a challenge to the most die-hard of Hong acolytes. Whether it be the more straightforward bifurcation of Right Now, Wrong Then or the extranational star presence of the Hupperts, the noted uptick in relative reception can put up something of a smokescreen for his more particular idiosyncrasies. No film demonstrates that better than Hotel by the River, which still resolutely remains one of his lesser films for me, especially compared to Grass, albeit one that still retains something quite moving and unclassifiable within its more discernible narrative.

Before talking about that, however, I have to touch on the handheld cinematography, which remains totally inexplicable to me. Hong’s opening voiceover — which reminds me of Welles, and remains the only time he’s technically been in his own films, even if my friends and I are convinced that he’d be marvelous as an actor (or in cameos) — takes the unusual step of mentioning the shooting period of January 29 to February 14, 2018, which, given his ordinarily short shooting schedule, suggests this wasn’t a decision borne of a time-crunch. I initially thought on this rewatch that there might be a shift to static cameras for the final scenes, but it appears to remain handheld for every single shot. If I had to venture an interpretation, it’d point to the frailty shared between the protagonists, but that’s a bit of a stretch. I got used to it after a while, and it doesn’t strictly detract from my appreciation of the film, but it’s still a seemingly arbitrary choice/experiment, especially given his swift return to tripods.

After eight supporting performances, Gi Ju-bong finally gets to lead a Hong film, and he truly is wonderful. Even though he was only in his early 60s at the time this was made, he still brings a palpably more wearied presence only really suggested before by Moon Sung-keun, though of course he only led part of Oki’s Movie. While he technically shares leading status with Kim Min-hee, once again playing a character named Ah-reum — it’s quite neat that this three-film black-and-white run forms something of a loose trilogy of films where Kim/Ah-reum is a co-lead — it is his narrative that defines the film, while Kim embodies something more ethereal and abstract, appropriately caught in stasis.

Hotel by the River feels even more stripped down than The Day After, if only because the character relationships ultimately become far simpler: there are the father and his two sons, and the two friends, with only a hotel worker to occupy another speaking part. Like in Grass, there’s an off-screen owner of the principal setting — who has an unidentified dispute with Young-hwan — and a sojourn to a restaurant, but that was comparatively filled with characters and incidents. The hotel isn’t shown quite enough to make it feel truly deserted, but the fall of snow, even more sudden than the aftermath shown in Oki’s Movie, makes it feel beautifully desolate, these interactions playing against essentially a blank canvas, the impersonality of the Hotel Heimat (German for home, of course, in a film where you can’t go home again) letting the fairly set relationships play out. It’s certainly no coincidence how many naps there are; even Kyung-soo gets one while he’s waiting for Byung-soo to find their father.

Hotel by the River really strikes me most in how deeply it takes family as its central focus, to an even greater degree than Nobody’s Daughter Haewon, which refracted its portrait of a daughter through her relationships with others. Ah-reum’s plot with Yeon-joo — Song Seon-mi as Kim’s main screen partner once again — acts in some ways as a more stable Hongian mirror, a slow reckoning with a break-up that helps inform much of Young-hwan’s mindset through much of the film; it’s certainly significant that the film opens with him seeing Ah-reum outside, a moment of contemplation that sets the stage for the film to come. The two real interactions the two protagonists have, with the second putting into full bloom the sheepish inspiration he had received from the sight of these two women, almost act as interludes in the otherwise very causal film: Ah-reum and Yeon-joo take the first of many naps, then the next shot is of them walking in the snow; the shot of Kyung-soo and Byung-soo leaving the restaurant holds for a while before Young-hwan reenters to read his poem.

I had also forgotten that the poem featured those cutaways to a visual representation of his words, with a purposefully out-of-focus Shin Seok-ho working at an old gas station. Indeed, this is maybe the first Hong that uses what might properly be called montages; under the first two scenes when Young-hwan is talking to his sons, there are a few shots that appear to be flashbacks to various times during the past few weeks of his stay, including some priceless ones where he plays with dogs and giddily chops a piece of wood with an axe. These moments are downright conventional, but in Hong’s hands and especially with his particular dialogue, perched between conversational and poetic, it plays considerably differently, even if it actively breaks away from the “realism” otherwise present.

Hotel by the River remains incredibly difficult to talk about, if largely because its strengths seem specific to it and less tightly rooted in Hong’s body of work as a whole. Of course, there’s no shortage of linkages: the priceless line from Yeon-joo that Byung-soo is “hardly a real auteur” (given the heavy focus on his father and brother’s artistry, the lack of mention of Kyung-soo’s profession is noteworthy), the additional link between the two parties of Yeon-joo’s wrecked car mysteriously ending up in the brothers’ hands; the purposeful elision of how Ah-reum’s hand was burned; the frequent talk about autographs/celebrity and the digressive nature of the brothers’ initial conversation about the river. And the mere sight of seeing Yoo Joon-sang and Kwon Hae-hyo playing brothers is a delight, especially since their last shared screentime was as middle school friends; Yoo’s longer hair weirdly makes him look a lot different, and I wouldn’t be surprised if he switched to a vape in real life, necessitating his character to smoke the same. I’m also very fond of the scene where Kyung-soo and Byung-soo are given stuffed animals and the latter has to force himself to smile; it also leads into the handily philosophical sequence explaining the meaning of their names (in Chinese characters!), which is punctured by the typically Hongian response from Kyung-soo that his name has much less meaning than his brother’s.

It is in that balance that Hong finds his work and Hotel by the River, that need to learn how to be human while also belonging to heaven (echoing Ah-reum’s belief in The Day After); it’s not simply a film about letting go, but also about balancing that with the observation of those around the central doomed person. It was probably inevitable sooner or later that Hong would have a character definitely die on-screen, though of course there have been characters who died in dream sequences or who vanished from the film, but I think the finality of that scene is both effective, especially in the long shot of the door as Kyung-soo and Byung-soo’s voices come from off screen, and made more mysterious by that dissolve to Ah-reum and Yeon-ju crying in bed together. The link between these disparate strands is made both more apparent and more opaque in this moment, a final complication that prevents this from simply being an open-and-shut Hong unlike his other work, even in the late period. Even though my heart doesn’t tremble for this one as much as the films surrounding it, it trembles nevertheless, precious and delicate in its own way.