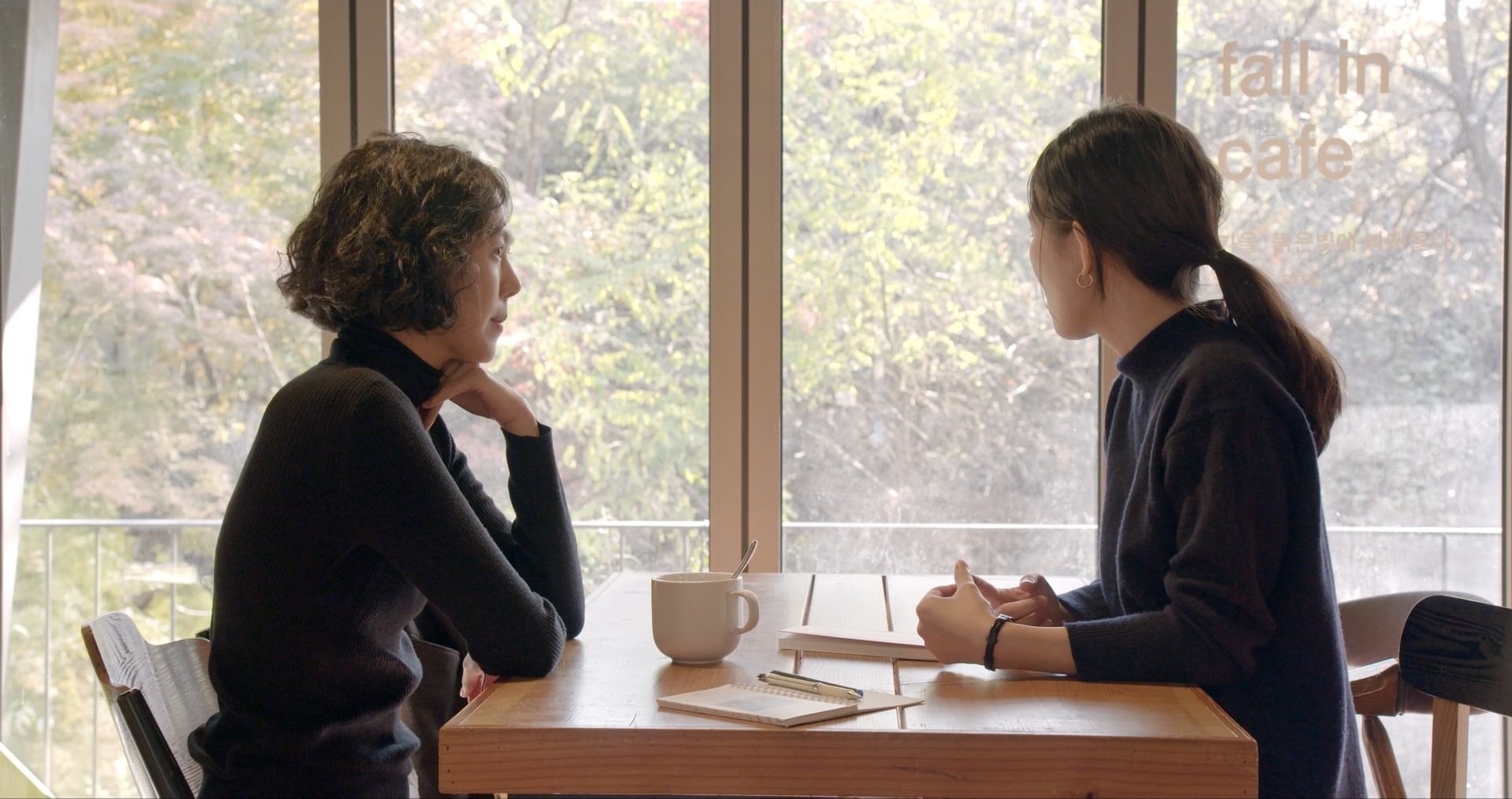 It really was a shock to us Hongians when Hong didn’t release a film in 2019. Despite Filipe Furtado’s delightful assertion that Martín Rejtman made sure that a year didn’t pass without a new Hong film with his amazing short “Shakti,” owing to health issues, Hong took the year off, making it the first year without a Hong since 2007, just barely missing making a film in every year of the 2010s. But it’s somewhat fitting that Hong returned with a film as seemingly unassuming yet beautiful as The Woman Who Ran. It’s maybe the first one (with the possible exception of Yourself and Yours), at least since I started receiving his films as they premiered, that the reception of nearly everyone on first viewing was of a more general appreciation, before growing in many people’s minds to become a major work. Hong’s films always linger in the mind, but this one strikes even more of a pensive mood.

Much of this comes from the renewed focus on Kim; despite the very sensible tendency of calling late Hong films as Kim-led films, this is really the first film since On the Beach at Night Alone that’s solely led by Kim, whereas the others since have had her explicitly as an observer or as a co-lead with someone else, either a man or Huppert. She is our guide once again, moving through, as Sean and Evan’s correspondence (probably their best) put it, three different pathways through middle age. While not as specifically death-obsessed as either of the past two films, and once again returning to color (mostly), there is a general sense of stasis here, comfortable experiences and/or relationships that Gam-hee comes close to disrupting while never quite piercing the veil.

One of the things most noted about The Woman Who Ran is the near-idyllic nature of its female-dominated storylines, with the inclusion of men as deliberate, unwelcome intrusions. This is certainly true throughout, but I found myself unexpectedly moved by a specific component. While Young-soon (Seo Young-hwa) and Su-young (Song Seon-mi) are played by two of Hong and Kim’s most prolific and notable collaborators, both essentially co-leading their sections in On the Beach at Night Alone and Hotel by the River, Woo-jin is played by Kim Sae-byuk, who played Chang-sook, the mistress in The Day After, and Ji-young in Grass (aka the woman who ran up the stairs).

In narrative terms, she embodies a similar role as in the former film: she has essentially replaced Kim’s character in a relationship with Kwon Hae-hyo’s character Jung. But the tonal register is entirely different: I had remembered the initial encounter as being mildly hostile, instead of the genuine and awkward curiosity that both women have upon seeing each other again. It’s almost like a mea culpa, or a reconciliation made impossible in that earlier film, and the metatextual nature of this scene, and its breezy dismissals of Jung, made me genuinely emotional.

While it’s true that this third section breaks from the neat, planned visits to old friends’ living spaces, the structure as a whole contained more variances than I remembered: there are brief conversations that the other women have before Gam-hee arrives in the first and third section (in addition to apples) while Su-young is alone; the two days-one night structure of the first section is met by two neatly bisected conversations in the other two parts. And an extraordinary linking gesture that I hadn’t noticed at all before that aren’t the mountain zooms: Gam-hee stirs a drink in her first conversation in each part, although it’s coffee with a spoon in the second two parts and makgeolli with a chopstick in the first part.

I had also forgotten that, while the men are predominately shot from the back — a neat little reversal of the conversation immediately preceding the first confrontation about the mean rooster who pecks out the feathers of the hens to prove his dominance — their faces are clearly visible, especially in the second and third. Furthermore, there’s something considerably more ambiguous about the second one than I had remembered, and the shot of Gam-hee exiting the second part bears more than a passing resemblance to the shot of Ha Seong-guk — in his first of now many Hong appearances — sadly walking away. This also happens in the shot of Gam-hee looking at the security footage; the first time she does it, it feels like it’s emphasizing the distance between her and the comforting taking place on the screen, but this time it’s closer to the role she had in the early stages of Grass; the door lock in the former reminds me of the one in The Day He Arrives.

Speaking of Grass, this likely forms a recurring role for Seo, though they aren’t named the same. In that film, Seo’s character Sung-hwa explained that she couldn’t take in Chang-soo because she was living in the country with a roommate, a situation that’s a perfect match for her living style in the first part. This is also the first Hong that more-or-less explicitly has a queer couple, who will delightfully turn up again in In Front of Your Face: I had forgotten that Young-jin (Lee Eun-mi) is the one who fields most of Shin Seok-ho’s questions during the robber cats scene, and in general I love how content she is to remain in the background. In the last shot of the first part, it is the friends Gam-hee and Young-soon who have their arms around each other, while Young-jin, respectful of the shared history her partner and her partner’s friend have had, follows along behind.

The robber cats scene really is one of Hong’s greatest scenes and shots, the cat perfectly posing as a button on the scene, and it’s made all the more richer by the conversation that Gam-hee and Young-soon have earlier about cow eyes and consciousness. They remark on the great beauty of cows’ eyes, and the latter discusses briefly the separation between the consciousness of the mind, which can interact easily with cows and other animals, and the instinct of the body, a dialectic that neatly sums up the indecision of many Hong protagonists. In this light, the confrontation boils down not to neighbor etiquette, but to the very nature of how animals should be considered: as a being that should be nurtured like a human or not. The intelligence of the pose offers Hong’s answer.

It really is striking how little the viewer learns about Gam-hee as a character, aside from her husband’s history teaching position and the fact that they haven’t spent a day apart in five years. But while I think it’s too much to suggest that she must be in an unhappy marriage, her musings that she goes out less because she doesn’t want to say things she doesn’t need to see or do things she doesn’t want to do feels like it cuts both ways. The way of the Hongian protagonist is to get into precisely those interactions, even in his more sedate films, and this film very much functions as a breaking of that shell for Gam-hee, an exposure to mysteries like the third floor. Of course, there’s no indication that these are specifically sequential encounters, whether these might be dreams/repetitions or taking place weeks or years apart, but the flow is so smooth that I’m inclined to see them as taking place in a “real” diegesis.

The film screening(s) is one of Hong’s most openly cinephilic gestures in a long while, probably not met since Right Now, Wrong Then. (The other audience member in the first screening is Darcy Paquet, probably the preeminent Korean-to-English subtitle translator, who did Parasite among many others.) For one, it might actually be the first time he’s actually showed a film projected on screen unless I’m misremembering; every other Hong film-within-the-film has either been presented as “real” or played off-screen in the theater with only the sound as proof that something is being shown. The serenity of the image in both black-and-white and color, along with it potentially playing the same image at both the beginning and end, almost suggests a slow cinema film.

Of course, the switch from the first to the second, precipitated by her conversations with Woo-jin and Jung — her assertion that he repeats himself over and over, which makes his comments insincere, and his claim that the stress of quitting smoking is worse than the cigarettes themselves, offer plenty to ponder over — suggests an opening of her perception, an ability to finally see live not in monochrome but in living color. But this time I decided not to see the film as communicating such a clear arc, but instead as these miniature portraits, dances of common understanding among women that evoke so much about a change to a living style set in its ways. In that light, it’s as major as they come.